The intergenerational revenge saga was directed by Anurag Kashyap 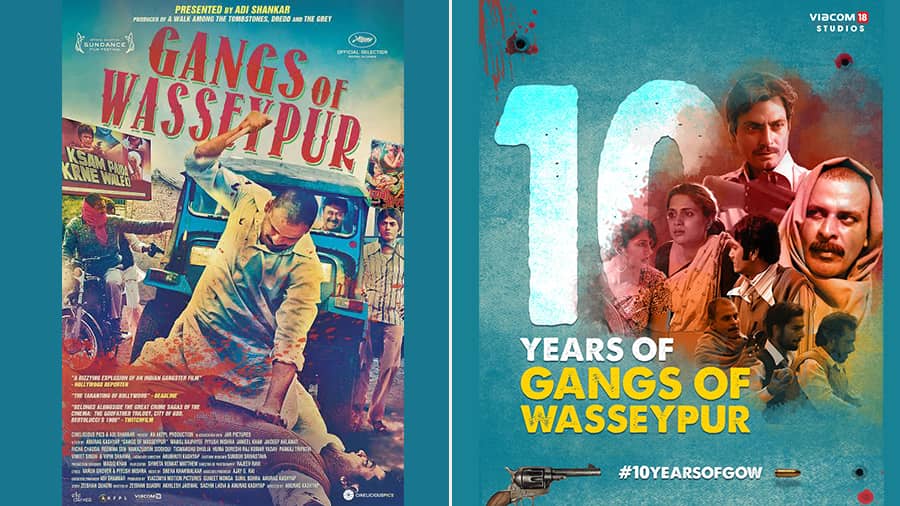 The Gangs of Wasseypur cast and crew celebrated the movie's 10th anniversary on Wednesday and called it a “modern classic” that introduced a host of fresh talent to Indian cinema.

Directed by Anurag Kashyap, the two-part intergenerational revenge saga Gangs of Wasseypur earned great reviews from critics upon its debut and was also a monetary success.

The movie series, which is set in Wasseypur, a small town close to Dhanbad in Jharkhand, tells the tale of the coal mafia over the course of three generations of a family involved in theft, extortion, and murder.

According to Chadha, who portrayed the fiery matriarch Nagma Khatun and Sardar Khan's first wife in the movies, “Gangs of Wasseypur” revolutionised not only the landscape of Indian cinema but also her life. She shared a brief flashback video clip of the movie's promotional activities on Instagram.

“Celebrating 10 years since the birth of this modern classic! Not a day goes by when I don’t think about the impact this film has had on the landscape of Indian Cinema, and my life. I am so grateful to have been a part of it. Loads of love to the team. The film did give a LOT of talent to the film industry…,” her caption read.

From writers to actors, Gangs of Wasseypur made a star out of everyone who was part of the film, said The Broken News star Jaideep Ahlawat.

“It is an iconic film that gave a new form to Indian cinema. The director was already a big star then but this film made stars out of writers, actors, everyone. All of them went on to do some great work ahead. That film proved to be very lucky for all of us. The name of ‘Gangs of Wasseypur’ will be remembered till the time people talk about Indian cinema,” the actor, who played the original patriarch Shahid Khan and father of Sardar Khan, told PTI.

Co-written by Kashyap and Zeishan Quadri, the first part of Gangs of Wasseypur was released on June 22, 2012, and the second part hit the theatres on August 8, 2012. The soundtrack was composed by Sneha Khanwalkar and Piyush Mishra with lyrics penned by Mishra and Varun Grover.

Mishra, who also starred in the film as Nasir Ahmed and narrated the films, expressed his excitement on instagram for the 10th anniversary of the movie.

“10 years to Gangs of Wasseypur. Cheers to the entire team,” he wrote as he shared a series of photos.

Anurag Kashyap and Manoj Bajpayee both shared several fan posts about the film on their Instagram stories.

The film was screened in its entirety at the 2012 Cannes Directors' Fortnight, becoming one of the only Hindi-language films to achieve this feat and received overwhelming response at various film festivals across the globe.

Jai Mehta, who along with Neeraj Ghaywan and Vicky Kaushal, served as an assistant director on Gangs of Wassepur, said he owes his career to the film's director.

“Can't believe it's been 12-13 years since we began working on this! I owe everything I am to @anuragkashyap72 Sir. So many of us are where we are today, because of him. Sir, it's time we had a GOW get together!” he wrote on Twitter.

Can’t believe it’s been 12-13 years since we began working on this!
I owe everything I am to @anuragkashyap72 Sir. So many of us are where we are today, because of him ❤️
Sir, it’s time we had a GOW get together! https://t.co/L8WaLM1Ske

“Ten years to the world premiere of a film that opened gates to this industry for many of us. GANGS OF WASSEYPUR will always be the most special film of my career. The trust @anuragkashyap10 put in his team of mostly newcomers was so liberating that I still keep looking for that kind of good faith based collaboration in everything I do,” Grover had written in an Instagram post.

The Maharani actress, who made her debut with Gangs of Wasseypur, had also thanked Kashyap on Instagram for giving her a break.

“My first film, the first time I saw myself on the big screen and my first time at Cannes. It was a crazy special day indeed... Thank u @anuragkashyap72 for giving me this film AND a film career... and believing in me when no one did. Today so many people who have been part of that film are doing so well... can't believe how we made this film and had so much fun doing it.” read her caption.