Advertisement
Home / Entertainment / Do Revenge, The Banshees of Inisherin, Love in the Villa: New trailers and teasers

Do Revenge, The Banshees of Inisherin, Love in the Villa: New trailers and teasers 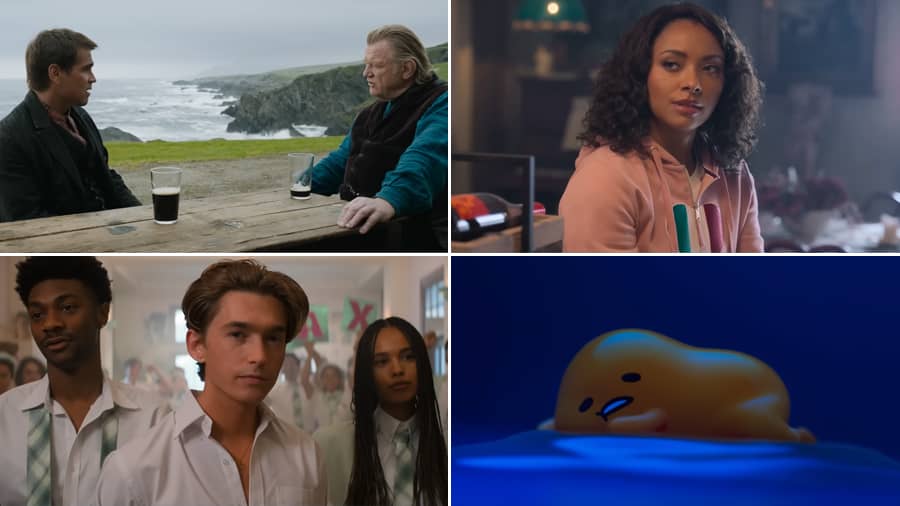 The Banshees of Inisherin

Searchlight Pictures has dropped the much-awaited trailer for Academy Award-winning filmmaker Martin McDonagh’s upcoming feature film The Banshees of Inisherin. The film stars Colin Farrell, Brendan Gleeson, Kerry Condon, Barry Keoghan and Kerry Condon. Farrell, Gleeson and McDonagh are reuniting after 14 years for this film. They were last seen together in 2008’s In Bruges.

The Banshees of Inisherin follows lifelong friends Padraic (Colin Farrell) and Colm (Brendan Gleeson), who find themselves at an impasse when Colm unexpectedly puts an end to their friendship. A stunned Padraic, aided by his sister Siobhan (Kerry Condon) and troubled young islander Dominic (Barry Keoghan), endeavours to repair the relationship, refusing to take no for an answer. But Pádraic’s repeated efforts only strengthen his former friend’s resolve and when Colm delivers a desperate ultimatum, events swiftly escalate, with shocking consequences.

The Banshees of Inisherin has already been selected for the Venice Film Festival and Toronto International Film Festival. It will arrive in theatres on October 21.

Love in the Villa

Netflix has revealed the trailer of their upcoming romantic comedy film Love in the Villa starring Kat Graham of The Vampire Diaries and The Umbrella Academy star Tom Hopper. The film is set in the small Italian medieval town of Verona.

The story of Love in the Villa revolves around a young woman who makes a trip to Verona after a breakup, only to find that the villa she reserved was also booked by a cynical British man with whom she’ll have to share her vacation with.

Love in the Villa will premiere on Netflix on September 1.

Directed by Jennifer Kaytin Robinson, who has served as a writer for Thor: Love and Thunder, Do Revenge revolves around two teenage girls, Eleanor (Hawke) and Drea (Mendes), who join forces to get back at those who did them wrong. Drea wants to take revenge on a boy who broke her trust and leaked their sex tape, whereas Eleanor wants to take revenge on a girl who had started a damaging rumour about her.

Netflix is yet to announce the release date of the film.

Netflix has released the official teaser of their upcoming hybrid live-action and CG animation series, Gudetama: An Eggcellent Adventure. The series is based on Gudetama, an unenergetic Japanese cartoon character based on an egg.

The official synopsis reads, “A lethargic, empathetic road movie about finding one’s parents — for everyone who just wants to laze about! Having resigned itself to the fact that it will just end up on someone’s plate, Gudetama just wants to be lazy all the time. But, swept up by the go-getting, overbearing chick Shakipiyo, it leaves the refrigerator and heads out into the world. Together, these polar opposites go on an adventure to find their mother!”

Gudetama: An Eggcellent Adventure will release in 2022, but the streaming service hasn’t confirmed the date yet.