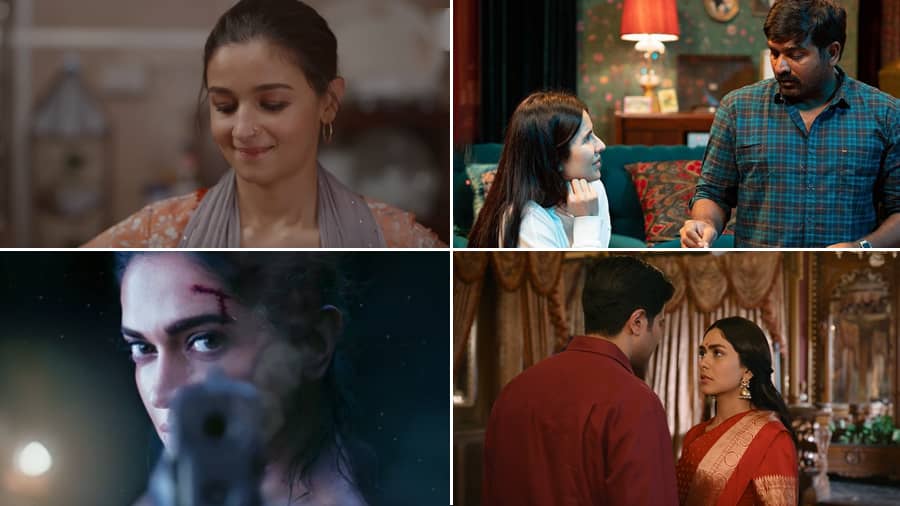 Shah Rukh Khan shared the first look of Deepika Padukone’s character in their upcoming film Pathaan. The Gehraiyaan actress is seen firing a bullet with a fierce look in her eyes.

The 56-year-old actor shared a motion poster that revealed Deepika’s first look in Pathaan and captioned it, “She doesn’t need a bullet to kill you! Presenting @deepikapadukone in #Pathaan. Celebrate #Pathaan with #YRF50 only at a big screen near you on 25th January, 2023. Releasing in Hindi, Tamil and Telugu.”

The much-anticipated action film is helmed by War director Siddharth Anand and is produced by Yash Raj Films. Shah Rukh will return to the big screen with Pathaan after a hiatus of more than five years. The film is billed as an all-out actioner and Shah Rukh is rumoured to play a spy in it.

Netflix India has released the trailer of their upcoming dark comedy Darlings, which marks the debut of actress Alia Bhatt as a producer. The streaming service previously shared a short teaser of the film which featured a quirky frog vs scorpion analogy.

Directed by Jasmeet K Reen, Darlings is touted as a dark comedy-drama which explores the struggles of a mother and daughter trying to find their place in Mumbai.

The trailer opens with the mother-daughter duo visiting a police station to file a missing person police complaint for the daughter’s husband, Hamza (Vijay Varma). The two mastermind Hamza's kidnapping and even take help from Roshan Mathew's Zulfi. Later in the trailer, it is revealed why they decided to kidnap and torture Hamza in their own house and why it may be absolutely justified.

The film Features Alia and Shefali Shah as a clever mother-daughter duo alongside Vijay Varma and Roshan Mathew. Produced by Gauri Khan, Alia Bhatt and Gaurav Verma, it also marks Alia’s debut as a producer.

Darlings will release on Netflix on August 5.

Katrina Kaif took to Instagram on Monday to share photos with director Sriram Raghavan and co-star Vijay Sethupathi from the rehearsals of their upcoming film Merry Christmas.

Merry Christmas is being produced by Ramesh Taurani’s Tips Industries in association with Matchbox Pictures Pvt. Ltd. The film is expected to release on December 23, 2022.

Earlier, the New York actress had announced the project soon after her marriage to Vicky Kaushal. The 39-year-old actress captioned the post, “New Beginnings 💛. BACK ON SET with director #sriramraghavan for Merry Christmas!  I’ve always wanted to work with Sriram Sir, He is a master when it comes to narratives that showcase thrillers and it’s an honor to be directed by him. . Super excited to be teaming up with @actorvijaysethupathi for this one produced by @rameshtaurani & @sanjayroutraymatchbox.”

Rajshri Productions on Monday announced that their upcoming film Unnchai will release on November 11 this year.

The production house took to Instagram to share the title and captioned the post, “The BIGGEST announcement of our diamond jubilee year! Uunchai will be in a theatre near you on 11.11.22. A film by Sooraj R. Barjatya brings a never seen before ensemble on screen. Starring the diamonds of Indian Cinema, Amitabh Bachchan, Anupam Kher, Boman Irani, Neena Gupta, Sarika with Parineeti Chopra, Nafisa Ali Sodhi and Danny Denzongpa, Uunchai is produced by Rajshri Productions in association with Mahaveer Jain of Mahaveer Jain Films and Natasha Malpani Oswal of Boundless Media.”

The trailer provides us a glimpse of the life of Lieutenant Ram (Dulquer Salmaan), and what unfolds after he gets a letter from a girl named Sita. After spending a lovely time together, the couple have to face distance as the army officer heads for his posting in Kashmir. He writes a letter to his ladylove, but it fails to reach her.

After almost two decades, Rashmika Mandanna (Afreen) is given the responsibility of finally delivering that letter to Sita. But she is unable to find her and hence they choose to find Ram. However, it turns out to be more difficult than finding Sita. The biggest hurdle of all is Ram’s superior, Brigadier Vishnu Sharma (Sumanth).

Sita Ramam is set to arrive in theatres on August 5.