From Sara and Ibrahim Ali Khan to Jahnvi and Khushi Kapoor, these siblings show their love on social media 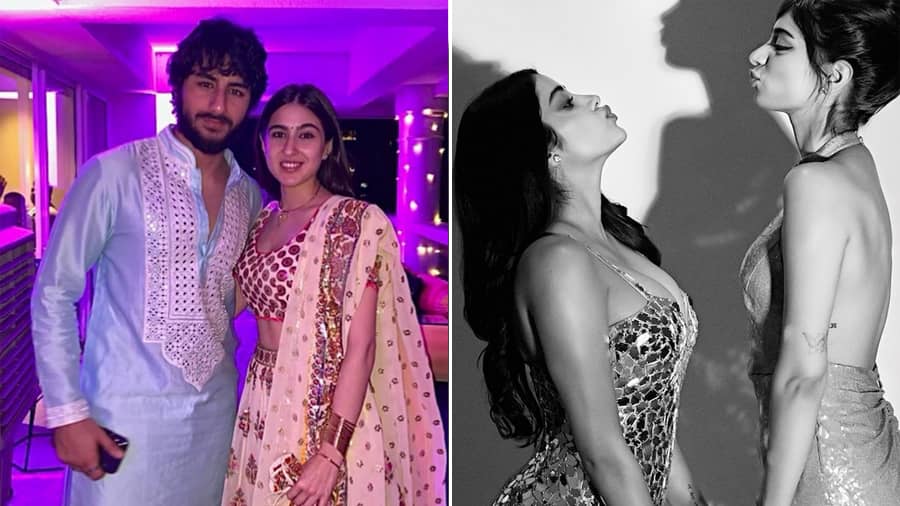 Bollywood’s coolest sibling jodis grab our attention with the love and attention they shower on each other on social media and at public events. From being protective of each other to being collab partners, these brother-sister duos come in many avatars, but there’s one thing in common — they always have each other’s back. Here are five adorable sibling duos of Bollywood who share a strong bond.

Saif Ali Khan and Amrita Singh’s two kids have an uncanny resemblance to them. While Sara is a spitting image of her mother, Ibrahim looks exactly like a younger version of his father. While Sara’s film career is going strong, younger brother Ibrahim has started his career in Bollywood by assisting Karan Johar for his upcoming film, Rocky Aur Rani Ki Prem Kahani. Sara and Ibrahim often hang out together and go on adventurous trails. The duo never fail to share their fun-filled moments on social media.

Huma Qureshi and Saqib Saleem are among the sweetest siblings in Bollywood. Huma started her acting journey in Anurag Kashyap’s iconic film Gangs of Wasseypur in 2012. Saqib made his Bollywood debut as the lead in Mujhse Fraaandship Karoge in 2011. He often posts pictures with Huma and their mother Asmina Qureshi on social media. Their bond is reflected in the hilarious captions and witty comments they leave on each other’s posts.

The Kapoor sisters are a force to reckon with on social media. They always stand up for one another and share their moments of joy and sorrow. While Khushi is often seen congratulating her elder sister for her accomplishments, Janhvi gives sound advice to her younger sister. While Janhvi is gearing up for her next release Mili, Khushi will make her screen debut in Zoya Akhtar’s The Archies on Netflix.

Born to Shah Rukh and Gauri Khan, Aryan and Suhana have always been at the centre of media attention. The siblings share a special bond and are often spotted together at parties and IPL matches. Earlier this year, Aryan and Suhana attended the IPL auctions in the absence of their father. Aryan had his tryst with acting in 2011 blockbuster Kabhi Khushi Kabhie Gham where he played a young Shah Rukh. Suhana will soon be making her Bollywood debut in Zoya Akhtar’s The Archies.

Sonam Kapoor Ahuja and her brother Harsh Varrdhan Kapoor have set the bar high for fashionistas on Instagram. While Sonam receives praise for her unique sartorial choices, Harsh’s IG feed mostly comprises pictures of shoes. Anil Kapoor’s son has made a niche for himself with commendable performances in films like Bhavesh Joshi Superstar and Thar. In the sixth season of Koffee With Karan, Sonam revealed that she and her sister Rhea are protective of their introverted brother.