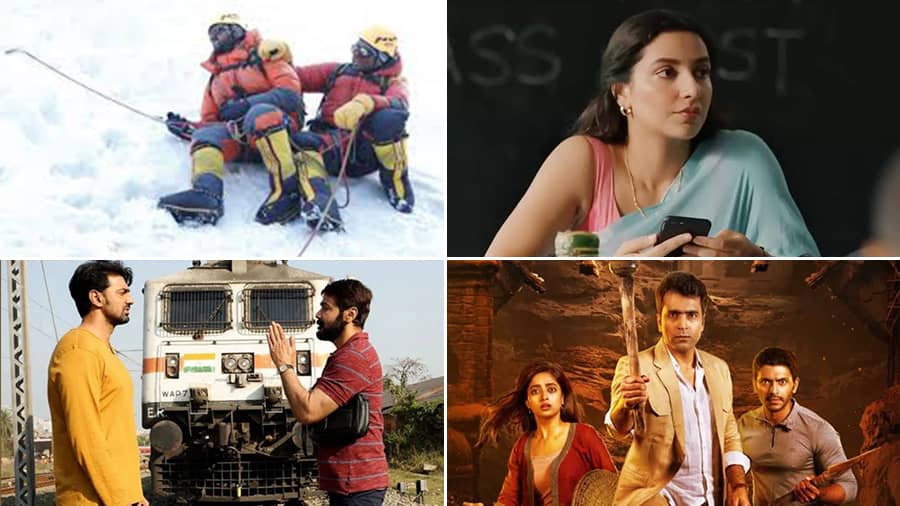 Between Ponniyin Selvan: Part 1 and Vikram Vedha, there are quite a few Bengali films that have released today and are worth a trip to the cinemas. Here’s a ready reckoner of the Tollywood films that can make it to your Durga Puja watch list.

What to expect: History professor Subarna Sen aka Sonada (Abir Chatterjee) is back with his third adventure. Accompanied by Abir (Arjun Chakrabarty) and Jhinuk (Ishaa Saha), his destination this time is the lost kingdom of King Sashanka — Karnasubarna. Sonada’s mission in life is to find the forgotten historical treasures of Bengal. This time our very own Indiana Jones will meet his nemesis in Bhujanga Hazra (played by Sourav Das).

What to expect: The two big stars of Bengali cinema — Prosenjit Chatterjee and Dev — have joined hands to tell a moving tale of relationships under the banner of Dev Entertainment Ventures. The story revolves around Kuntol (Dev), who is at his lowest when he comes across Sudarshan (Prosenjit), an insurance agent. The latter comes up with an insidious plan that can solve the problems in both their lives.

The film’s music is already among the chartbusters. Pranjal Biswas of Superstar Singer 2 fame has sung a folk number, and Mukti Dao, sung by Sonu Nigam, has crossed one million views on YouTube.

What to expect: This social drama produced by Roadshow Films marks Parambrata Chattopadhyay’s next directorial venture after Abhijan, a biopic on Soumitra Chatterjee which was highly appreciated by critics and audiences alike. Boudi Canteen follows the story of Poulami (Subhashree), a teacher who aspires to become a cook. Her in-laws feel cooking is too mundane a job, and the film is about how Poulami convinces her family and where her passion for cooking takes her.

What to expect: In 2016, a team of four mountaineers from West Bengal went on an expedition to climb Mount Everest. Three of them could not survive the rough terrains. Sunita Hazra, the lone survivor, scripted history. This film produced by Camelia Production tracks Sunita’s uphill task and the hurdles she faced to fulfill her mission. Chandreyee Ghosh plays the mountaineer.

IN CASE YOU MISSED IT:

What to expect: Amir Hussain (Ujaan Ganguly), Shibnath Dutta (Purab Seal Acharya) and Gayatri Chatterjee (Ritwika Pal) are three young doctors who are stranded in a small village in rural Bengal. They encounter a mad rush among people to visit a supposed incarnation of goddess Lakshmi in a Dalit household in the village. The baby girl, born with four hands, is actually a case of Parasitic Twin. The three young doctors take it upon themselves to save the girl from the superstitions and the political ambitions of the local zamindar’s son Rajat (Indrasish Roy).

What to expect: Based on Bibhutibhushan Bandyopadhyay’s novel Aparajito, Avijatrik won the National Award for Best Bengali film in 2021. Starring Arjun Chakrabarty as Apu, the film takes off where Satyajit Ray concluded his Apu Trilogy. Director Subhrajit Mitra has depicted Apu’s loneliness and quest for rejuvenation in an artistic manner on the big screen. He has also introduced an important character, Leela (Arpita Chatterjee), whom Ray had omitted in his films. Apu’s dynamics with Leela are a treat to watch.