Amitabh Bachchan on Pt Shiv Kumar Sharma: He played santoor in its brilliance

Calling Santoor maestro 'talent of a genius', Big B writes a note remembering the legend 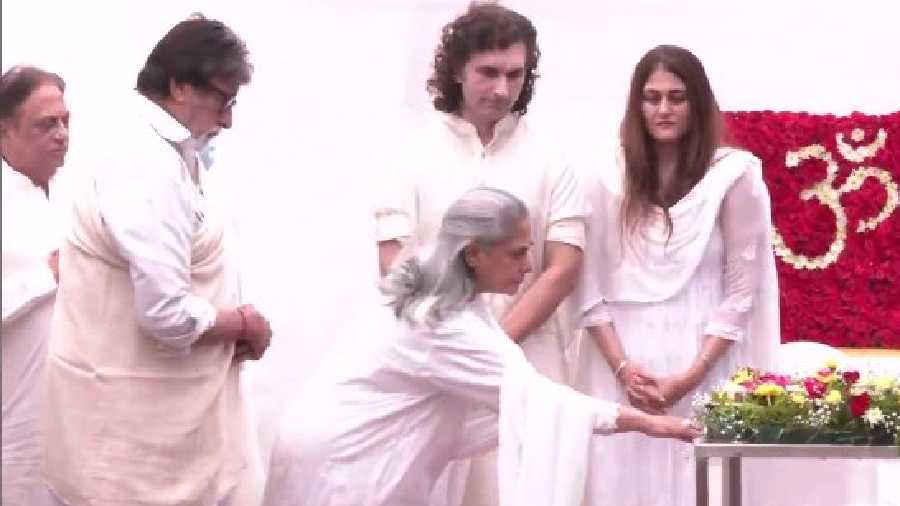 Megastar Amitabh Bachchan on Wednesday paid tribute to Pt Shiv Kumar Sharma and said he was pained by the demise of the santoor virtuoso who was "humble despite his incredible presence".

One of India's most well known classical musicians, the 83-year-old musician passed away on Tuesday morning following a heart attack at his Pali Hill house here.

Sharma was also one half of the famous 'Shiv-Hari' composer duo along with flautist Pt Hari Prasad Chaurasia. The duo had composed the chartbuster music for Bachchan's 1981 romantic drama Silsila, directed by Yash Chopra.

Calling Sharma the "talent of a genius", the cinema veteran penned a note remembering the legend.

"There is the passing away of the Maestro ShivKumar Sharma, who played the santoor, a special instrument, from the valleys of Kashmir .. who designed so many film musics for me and many others .. continued success after success, numbs you from the pain of pain .. as also the reverse ..

"Shivkumar ji , who played the santoor' in its brilliance .. who put his heart and soul into whatever he took up .. humble despite his incredible presence .. and the talent of a genius (sic)," the 79-year-old wrote.

Born and raised in Jammu, Sharma began his journey in music as a tabla player when he was only five but soon found his calling in santoor, a stringed folk instrument from Jammu and Kashmir, and gave it global identity and classical pride.

As Shiv-Hari, the pair began their partnership with Silsila in 1981 and went on to compose several melodious songs for films such as Chandni and Lamhe, Silsila was the start of their Hindi film music career, which ended with Shah Rukh Khan-starrer Darr.

Bachchan said Sharma and Chaurasia were formidable partners in music.

"A sad ending to the master of the string instrument .. he and Hari Prasad Chaurasia ji , the renowned flutist were a 'dua' (blessing) for film music .. they came as strong as they could .. played recorded and left ..While the walk down the Marine Drive a thought shared with all .. but all sublime in its content .. and then the coming together for this illness ..

"Many came to see the celebrity .. many more for the genius film making .. he shall be remembered for good..." he added.

After a guard of honour in Juhu, where his mortal remains were kept for people to pay their respects, Sharma's funeral was held at Vile Parle's Pawan Hans Crematorium.

The musician's family, including wife Manorama and sons Rahul and Rohit, his friends from the fraternity, including long-time collaborator Chaurasia and tabla maestro Zakir Hussain, were present.

Sharma's last rites were performed by his sons, followed by a gun salute.

Talking to reporters, Akhtar said Sharma's name will always be synonymous with santoor.

"There are a few phrases which are said whenever a big personality passes away, 'There will be no like him. There is now a void which can never be filled'. But in Shiv ji's case, they are not cliches but absolute truth. When a musician learns to play an instrument like no one else, he becomes a maestro. But when Shiv ji picked up the santoor, the instrument got respect across the world.

Sharma received the Sangeet Natak Akademi Award in 1986, followed by the Padma Shri in 1991, and the Padma Vibhushan in 2001.