Advertisement
Home / Entertainment / ‘All or Nothing: Arsenal’ first look trailer out on Prime Video: here’s a decoding

‘All or Nothing: Arsenal’ first look trailer out on Prime Video: here’s a decoding

The first three episodes of the docu-series will release on August 4; watch the trailer here 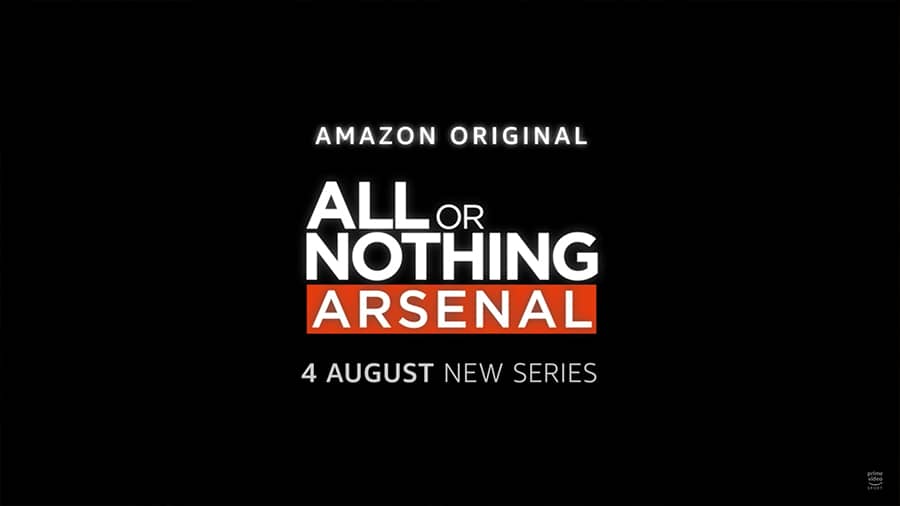 The streaming platform shared the release date and tweeted: “First look! All Or Nothing: Arsenal. Coming 4 August. #AONArsenal.”

First look! All Or Nothing: Arsenal.

The first three episodes of All or Nothing: Arsenal will drop on August 4. On August 5, Arsenal will kick off their Premier League campaign with a trip to Crystal Palace in London.

The north London-based club is the third Premier League club to have a behind-the-scenes documentary produced by Amazon, following in the footsteps of All or Nothing: Manchester City and All or Nothing: Tottenham Hotspur.

What the trailer has

The less-than-a-minute-long trailer gives us a glimpse of the theatrics of last season as the Gunners fell short of the Champions League spot. It starts with the horrible start to the campaign which wreaked havoc on the club as well as its fanbase.

The trailer shows goalkeeper Aaron Ramsdale throwing his water bottle to the ground inside the dressing room and coach Mikel Arteta giving a passionate speech to encourage his young squad. Arsenal star boy Bukayo Saka features heavily in the trailer.

Former Arsenal captain and striker Pierre-Emerick Aubameyang also features in the trailer before his dramatic falling out with Mikel Arteta and eventual exit to Barcelona in the January transfer window.

All or Nothing: Arsenal will take viewers behind the curtains during the 2021/22 campaign, offering coverage of coach Arteta and his team as well as a never-seen-before insight into life at Emirates Stadium and London Colney.

With narration from Academy Award-and-BAFTA-Award-winning actor and lifelong Arsenal fan Daniel Kaluuya, and a chance to go behind the scenes of the historic club, the series is sure to be a hit with Arsenal fans across the world.

Earlier, the studio had revealed the Get Out star as the narrator of the docuseries on Twitter. “Introducing the voice of #AONArsenal... @Arsenal Daniel Kaluuya,” the Tweet read.

Bukayo Saka in the ‘All or Nothing: Arsenal’ trailer.
Youtube screen grab

What can Arsenal fans expect

In the 2021/22 season, Arsenal endured an uphill season, and fans went from moments of elation to the brink of despair. From a dismal start to the campaign to injuries to multiple changes in captaincy, the youngest squad in the league went through a campaign filled with dramatic outcomes.

The rise of the young academy graduates from the team’s Hale End Academy has undoubtedly been the season’s high point. Bukayo Saka, Emile Smith Rowe and Eddie Nketiah, for example, have solidified their positions in the team with their consistent performances.

All or Nothing: Arsenal promises to cover it all – the rise, the fall and everything in between. The Gunners’ faithful will be eager to know what went wrong between Aubameyang and Arteta followed by the disastrous January transfer window that virtually ended Arsenal’s chances to qualify for the Champions League.

Viewers will receive exclusive access to the adventure of this significant season as the historic club undergoes an exciting phase of a rebuild. All or Nothing: Arsenal will provide supporters with the chance to discover more about what makes Arsenal such a unique club, as well as its illustrious past and aspirations for the future.