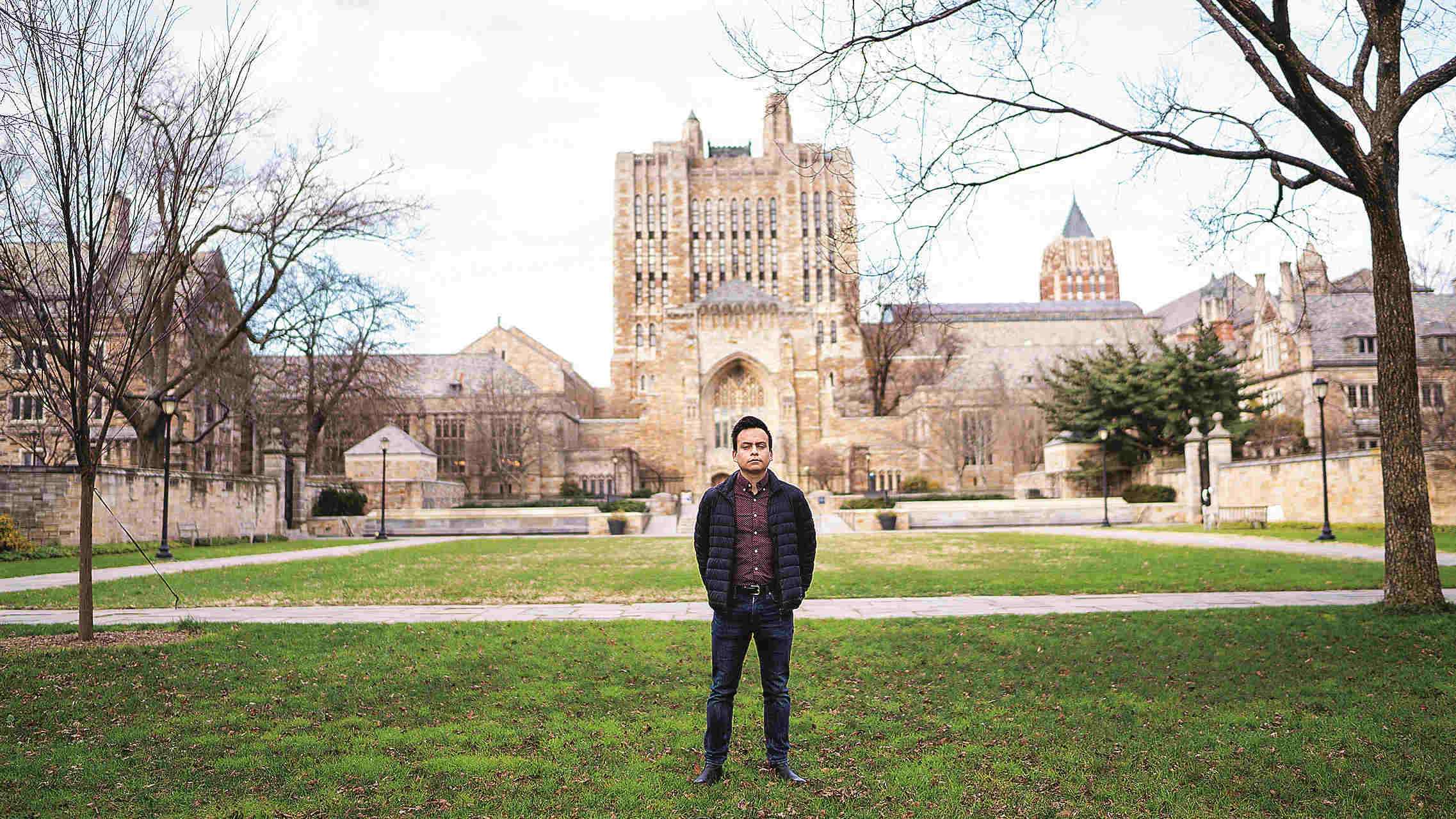 Business class: David Arteaga-Caicedo is an MBA student at the Yale School of Management. His courses are no longer taught.
NYTNS
Paul Sullivan   |   Published 19.01.21, 02:04 AM

Getting a master’s degree in business administration is about a lot more than book learning. It is about the conversations in class and the chance meetings before and after the lecture. It’s about joining clubs that promote a professional or personal interest. Above all, it’s about networking with fellow students as well as with corporate recruiters and successful alumni who come to campus — all in the hope of getting a career boost.

It’s not about sitting alone in your apartment and staring at a Zoom screen for classes, networking and socialising.

And all this comes with a substantial tab. Many of the top business schools calculate the annual cost — tuition, room and board — at more than $1,00,000 (Rs 73 lakh), with some closer to $1,20,000 (Rs 87.8 lakh). That doesn’t include the cost of not working for two years. And the schools have not reduced their tuition fees in the pandemic.

Students in the MBA class of 2021 have been hit particularly hard. They began their programme in the fall of 2019 and all went as usual until midway through the spring semester, when classes went virtual and the long-planned international trips that typically populate the semester were cancelled. The lucky ones kept their summer internships, albeit remotely. For others, internships were cancelled. And this school year has been more of the same.

As to their job prospects, students who want to work with large companies in traditional fields such as consulting, finance and technology have generally fared the best. Those who had hoped to join a start-up are still waiting, and those who had planned to go into fields that were disrupted by the pandemic — real estate, hospitality, even healthcare — are facing an uncertain spring.

“Is it worth $2,00,000 (Rs 146 lakh) plus what I could have been making,” asked Terence Mullin, who worked in investment banking in Chicago, US, before enrolling at the Haas School of Business at the University of California, Berkeley, US, where all the classes are online. “No.”

Mullin is one of those students who had hoped to change careers — to online gaming, in his case — and he has yet to receive an offer.

The cost of business schools has long been high. Haas, as part of a public university, is on the less expensive end, with tuition under $70,000 (Rs 51 lakh) a year. The total cost of Columbia University’s graduate programme at its business school over two years is estimated at $2,35,000 (Rs 172 lakh).
Academics, which students in the past would often say was the least of their reasons for going to business school, is the area where the schools have had the most control in translating in-person learning to virtual or hybrid models. Students said the effectiveness depended as much on the course as how it was delivered. Mullin said his negotiations class at Haas was probably better online, since it involved just two students in a Zoom breakout room. But larger core classes have been tough.

“Keeping your concentration for three hours on Zoom, particularly if you have other classes, is difficult,” said Vishesh Garg, a second-year student at Columbia who moved from India to attend the programme. He has opted to attend class in person whenever it was offered, he said.

Yale University’s School of Management adopted a hybrid model, where students could attend class on alternate days or just go virtual. David Arteaga-Caicedo, also in his second year of the programme, opted to attend virtually. “Part of the beauty of going to class was the serendipitous encounters,” he said. “Here, you’d go to class and then have to leave immediately.” Those spontaneous encounters are something that even the top-tier institutions cannot recreate virtually.

“The pandemic has taken the bulk of it away,” said Kerwin Charles, dean of Yale’s business school. “I’ve said to second years that we will do all we can in a remote context or a remote mechanism to carry on those activities. But they’re not chance encounters.”

As for travelling to class or with classmates — which many students cite as crucial to their selection of a school, that is not happening. Nor are the interactions with international students,  many of whom went home in the spring and have struggled to return.

Megan Reichert  had chosen Haas for two classes: international business development and extreme leadership, which ends with a hiking trek in the Andes. Neither has happened.

However, she said, she gained some unexpected skills as one of the leaders of the spring project for her international business development class, in which the students advised a Chinese corporation.

“I just reshaped the project around what people needed. It was a unique opportunity to lead through what was very disappointing, frustrating news,” Reichert said.

Students who went to business school to change careers are, in some cases, finding that the pandemic has put up new challenges. Students who took offers from larger companies last fall for their summer internships may end up in a better position than those who waited until the spring, when smaller companies and start-ups usually come calling.

Arteaga-Caicedo had been trading metal derivatives in New York before going to Yale. He wanted to go into consulting and secured an internship before the pandemic hit. He did an internship at a consulting firm virtually and has already accepted a job offer for next year.“I feel very fortunate,” he said.

Networking is a big part of the MBA experience. It’s the component that could pay the most dividends far after graduation. But in a virtual or socially distanced world, it has been stunted.

“The social component has been disappointing,” said Emma Finkelstein, a second-year student at the University of Virginia’s Darden School of Business. “If I’m a floating head on Zoom, I’m going to have a different relationship with my professors and classmates than if we were in social situations.”

Garg, who describes himself as introverted, said he had pushed himself to get out. “It’s a lot about being proactive,” he said. “I’ve been grabbing coffee with people. It takes a lot of effort. There are some days you don’t want to do it. But then you realise you’ve been home for three days and haven’t seen anyone.”

And it is not only the less outgoing students who have been feeling excluded. International students who haven’t been able to return to the US and students from underrepresented minority groups have also been affected.

“Certainly, I would say the consequences of the pandemic for the types of informal networking that occurs on our campus could be more impactful for students who felt, for whatever reason, less included among their MBA peers,” said Jonah Rockoff, senior vice-dean of curriculum and programmes at Columbia Business School. “These lost opportunities for networking and connections will have a significant impact on them.”