The SC had earlier refused to entertain the petition and had directed the petitioner, a lawyer, to move the high court 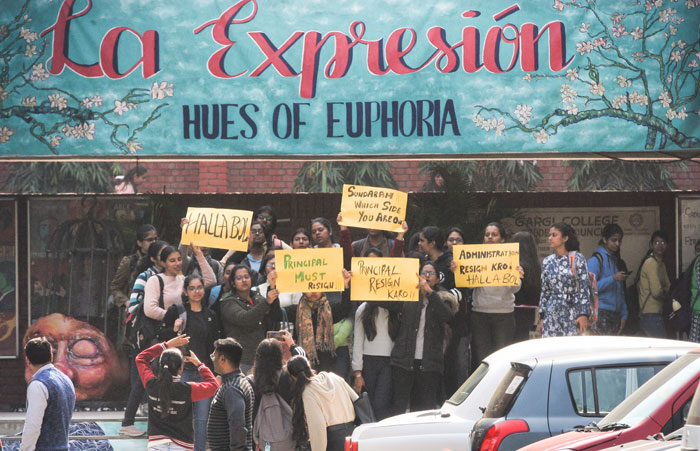 Students hold placards during a protest, against the alleged molestation of students by a group of men who had gatecrashed a cultural festival, at Gargi College, in New Delhi, Monday
PTI
PTI   |   New Delhi   |   Published 13.02.20, 12:26 PM

A plea was moved in the Delhi High Court on Thursday seeking a court-monitored CBI probe into the alleged molestation of students during a cultural festival at the all-women Gargi College here last week.

The Supreme Court, earlier in the day, had refused to entertain the petition and had directed the petitioner, a lawyer, to move the high court.

Mass molestation #GargiCollege in the heart of Delhi..Shameful!
The pattern of crime under Modi 2.0 regime hits you on your face and the slogans of Jai Shri Ram seem to be the saviour of these goons.
NO fear of Law . pic.twitter.com/hI6zyqQdCj

Hours after the apex court's decision, the lawyer filed the petition in the high court.

The petition, by advocate M L Sharma, has sought preservation of all video recordings and CCTV camera footage of the college campus.

It has also sought arrest of the people behind the “planned criminal conspiracy”.

Ten people, between the ages of 18 and 25 years, were arrested by police on Wednesday in connection with the incident.

On February 6, a group of men broke into the Gargi College during the 'Reverie' fest and allegedly groped, harassed and molested the attendees, who claimed that security officials stood watching when the incident took place.

The incident came to light after some students took to Instagram to narrate their ordeal and alleged that security personnel did nothing to control the unruly groups.

Sharma, in his plea, has alleged that it was a planned political and criminal conspiracy hatched in the backdrop of the Delhi elections and no action was taken after the incident.

My question on the sexual molestation in Gargi College. Unfortunately the BJP Minister's reply is hardly reassuring for the students. His attutude is that of "sab chalta hai". #GargiCollege pic.twitter.com/UrEULCcOcs

”It is a clear criminal conspiracy hatched by the political party to deploy accused persons to provoke the Delhi public for effecting voting in their favour. Despite presence of Delhi Police ... on February 6, neither principal nor other state authorities tried to stop and arrest the accused persons,” the PIL claimed.

The petition further claimed that “deliberate chants of Jai Shri Ram discloses that it is a political, planned conspiracy” and blamed the chief minister of Delhi for not taking any action against the accused.

Besides the security arranged by the college, the area had Delhi Police and paramilitary personnel who were stationed there for the Assembly polls.

According to the police, a case was registered under IPC sections 452 (house-trespass after preparation for hurt, assault or wrongful restraint), 354 (assault or criminal force to woman with intent to outrage her modesty), 509 (word, gesture or act intended to insult the modesty of a woman) and 34 (acts done by several persons in furtherance of common intention).