Shreya Ghoshal set the stage on fire at Beyond Barriers Chapter XVIII, with the Telegraph 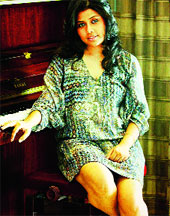 “People from all walks of life attended the mega event. We are grateful to the melody queen for mesmerising the audience at Beyond Barriers,” said Sanjib Koner, honorary secretary of SXCCAA.

“We had a lot of expectations from Shreya. A live show is always better than a recorded one! Loved how she interacted with the audience,” said Terence Ireland, principal of St. James’ School.

“Shreya Ghoshal is one of the most prominent voices of our generation and she mesmerised the audience at St. Xavier’s College. Everyone was glued to their seats for hours. What a magical evening!” said Dharmen Trivedi, adviser to Beyond Barriers Chapter XVIII.

“This time we had given special emphasis on the technical aspect of the concert because Shreya Ghoshal is known as the melody queen. Shreya wanted to continue the concert beyond 10pm but we had to cut it short,” said Vikas Khosla, convener of Beyond Barriers Chapter XVIII.