Chef Khulood Atiq is on a mission to popularise Emirati cuisine

'Emirati food is originally served family-style, but to appeal to a global audience I started creating fusion dishes after carefully studying each country’s unique food culture ' 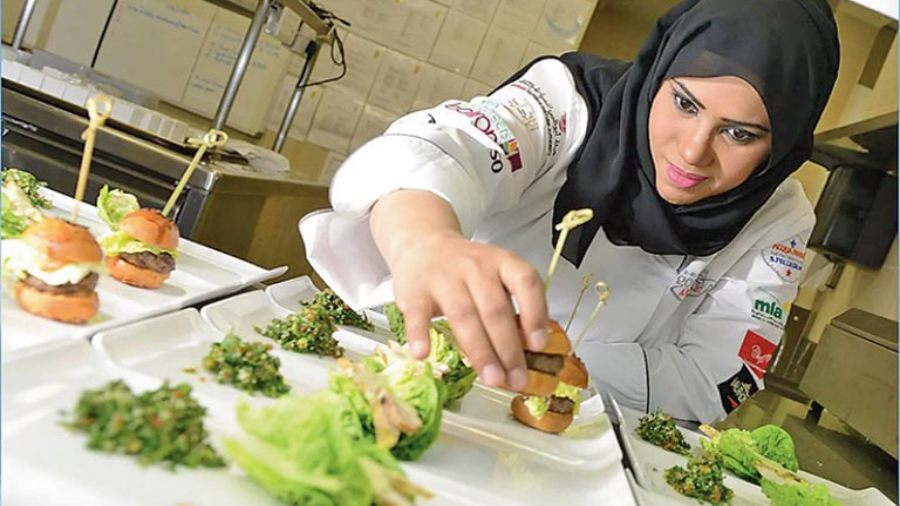 Mention the name Khulood Atiq to anyone in the United Arab Emirates and you will invariably find them beaming from ear to ear, a smile of pride more than anything else. And with good reason. Khulood Atiq is the country’s first female national chef, having stormed into the male-dominated bastion close to a decade-and-a-half ago, and switching her abaya for a chef’s apron. Since then, she has consistently broken the glass ceiling, with her effort to bring on a modern take on traditional favourites, helping travellers and locals alike embrace local cuisine in Abu Dhabi.

But Khulood, as she is popularly known to young and old alike, wears the mantle easily, as The Telegraph discovered when we met the chef on a trip to Abu Dhabi. “Cooking has always been a big part of my life. I have been inspired by the strong women in my family — my mother, grandmother and aunts — having grown up watching them expertly create beautiful meals in the kitchen. Just from observing, I learnt so many skills and techniques that I am still applying now,” Khulood told The Telegraph as we savoured a meal together at Mezlai, the upscale Middle-Eastern restaurant at the luxurious The Emirates Palace in the heart of Abu Dhabi.

“Emirati cuisine comprises rich spices and ingredients and the focus is on flavour and aroma,” says Khulood who has worked extensively through the years, along with many of her contemporaries and colleagues, to preserve the legacy of their rich cuisine, where meat, fish and rice are often staples.

“Even till the mid-2000s, almost no Emirati food was available in the tourism industry. One would only see Emirati food being cooked at homes. My passion for cooking received a fillip when I realised that I wanted tourists to discover authentic Emirati cuisine for themselves,” says Khulood as we dug into a hot and cold mezze platter, and chatted between bites.

Emirati cuisine has a long and varied history, being handed down through generations. While the bedouins in the desert sourced their ingredients through barter and came up with their own version of the cuisine, those living in the mountains settled for relatively simpler meals comprising simple ingredients sourced from their surroundings.

“In the beginning, Emirati cuisine relied less on spices and more on sauces. But once trade opened up, especially with south Asia, more and more spices made their way to Emirati food,” Khulood said as we retraced our steps to the history of her cuisine. Barter of ingredients formed the bedrock of Emirati cuisine, slowly developing into a form which is closer to what we eat in India than to the other cuisines of the Middle East. “There is no similarity between, say, Syrian cuisine and Emirati cuisine,” she smiles. But she also insists that an Emirati biryani, for example, will be different from the biryani as we know it in India. “The unique spices we use — our Emirati spice mix — differs, with each family having its own recipe, many of them comprising secret ingredients which are not shared with others.”

Chef Khulood has been instrumental in working with the government and tourism board to raise awareness of UAE cuisine, making Emirati food more accessible to all who visit Abu Dhabi.

Even till the mid-2000s, almost no Emirati food was available in the tourism industry. One would only see Emirati food being cooked at homes. My passion for cooking received a fillip when I realised that I wanted tourists to discover authentic Emirati cuisine for themselves — CHEF KHULOOD ATIQ

When Khulood first donned the chef’s cap, she felt the need to temper Emirati cuisine in such a way that it would appeal to the global palate. “Emirati food is originally served family-style, but to appeal to a global audience I had to present it in a more appealing and practical way. When I started serving Emirati food at international events, I focused on delivering the traditional taste but in a modern set-up. I started creating fusion dishes after carefully studying each country’s unique food culture,” said Khulood,

Perfectly encapsulating her remarkable journey with Emirati cuisine is Sarareed, an extensive cookbook put together painstakingly by Khulood. “The book has more than just recipes.... it also highlights Emirati culture and talks about the Emirati traditions of hospitality because receiving and honouring a guest with enormous generosity is considered a crucial part of Emirati heritage,” she says. Sarareed, available in both English and Arabic, is a foodie as well as a food historian’s delight, packed as it is with both simple and complex Emirati recipes. As a sign off, we asked the chef to pick her favourite Emirati dishes. “Balaleet (a traditional sweet and savoury dish, popular for breakfast) Machboos (a mixed rice dish), Muhalla (Emirati date crepes) and Thereed (a slow-cooked, heavily spiced stew served on top of a traditional thin Emirati flatbread called rigag),” she laughed, without batting an eyelid.