First Person: Anita Nair holds her breath when she writes

At an event, Nair talked about the birth of detective Gowda and the narrator of her latest work 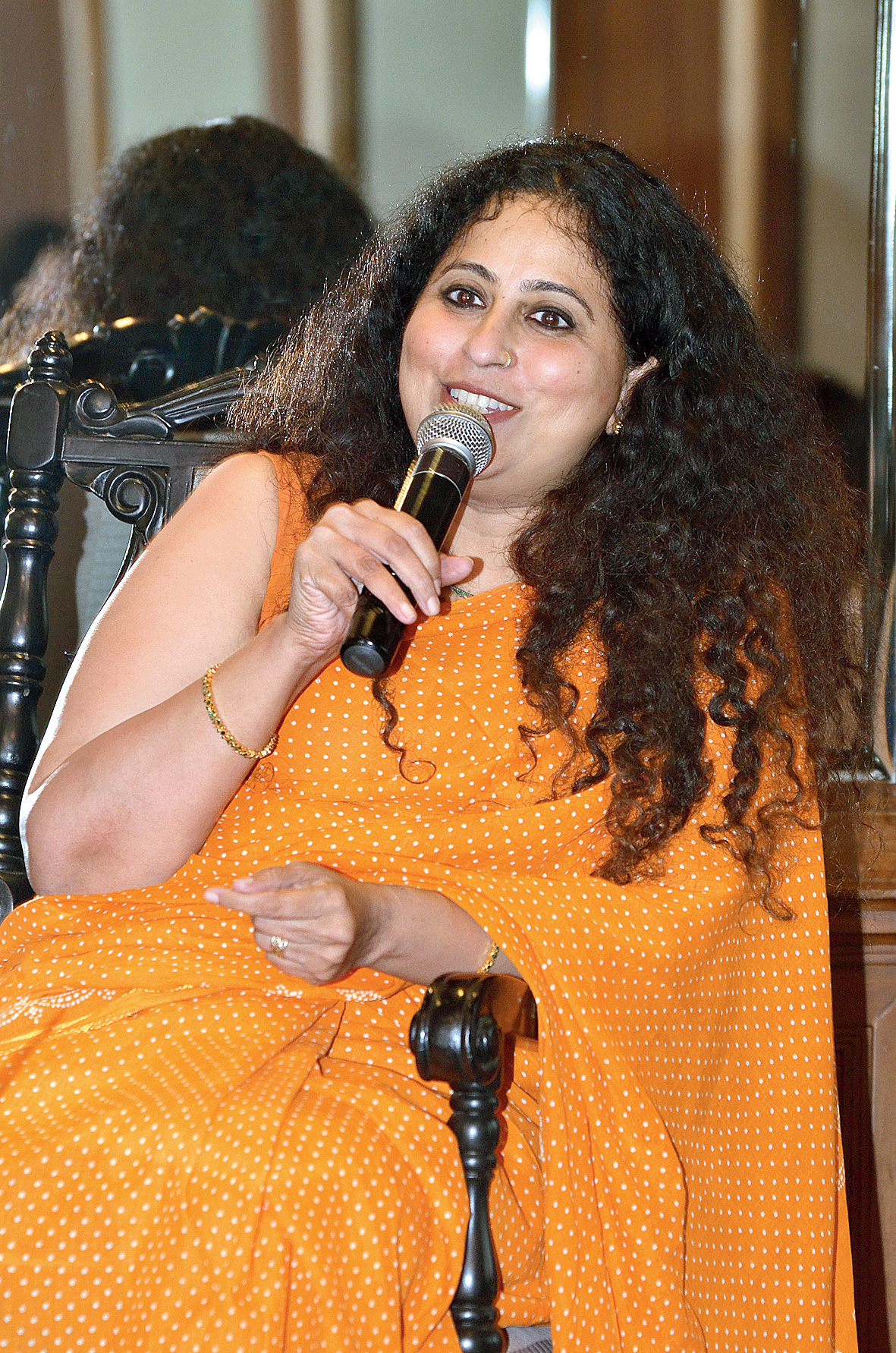 Before I actually start writing, I need to research extensively, and pretty much all my books have been grounded in a lot of research. The research part of it takes a lot of time. Once I have the research in place to some extent, I can start putting pen to paper. I’m a bit of a dinosaur in that sense that I still write long-hand (laughs) and so, when I say pen to paper, I say it both literally and figuratively. Whether I’m writing about Kathakali or child trafficking, or 17th century India, whatever it is, I somehow cannot start off without a metaphor. This metaphor determines the research that I do.

When I write, I actually hold my breath and I don’t know why I do it. Then at some point, I realise that I have this huge weight in my chest and that I have not been breathing. So I think that kind of lends itself to how I write.

I had finished writing this book called Lessons in Forgetting and it was published quite extensively in Europe. During this book tour in Europe, journalists were asking me the same question, and it would all come down to the status of the Indian woman. I was getting a little tired about the status of the Indian woman and I said I really want to write a book where it’s not about Indian women and their issues. My son was travelling with me at that time and he said, “Why don’t you write a novel that’s very testosterone-driven?!” and I said, “Ya, maybe.”

I remember coming back to Bangalore and I was jet-lagged, and I just decided before going to sleep that I would try to write a bit, and I started Gowda just like that. It was just an image that came to my mind of this police inspector on a Bullet and a certain kind of man. And then, the next morning I called up my editor and said, “Listen, I need to tell you something” and I heard a gasp at the other end! I don’t know what she thought I was going to confess.

And then I said, “You know what, I’ve started this crime novel” and she laughed and then I said, “Look, I don’t know how this is going to go, but let me send you the first chapter and you can tell me if this is worth it and if I should pursue what I want to do.” So, I sent it to her and she told me, “Just don’t stop writing, keep writing!” So the first book came out and everybody was curious as to who this Inspector Borei Gowda was. Many of them thought that I actually knew somebody like him… and I really wish there was a real cop like that.

I looked around and asked myself, what do I call him? I needed a first name for him and I didn’t want a standard one. In Karnataka, there are some standard first names like Nagraj and Manjunath and I didn’t want any of that. I remember reading a newspaper article and there was a mention of a constable, Borei Gowda, and I was like, “Yes!”

Before I started writing Chain of Custody, I said that I need to understand more about child trafficking. There is this organisation called Bosco, and they run rescue shelters for children. They have wings in railway stations and bus stands. They stay there and monitor the platforms, and if they see an unaccompanied child or something suspicious about a person accompanying the child, they do go and ask them for papers.

I started off by going there and when I would go there, they would usually wait for these trains to come from Odisha because that is one of those areas where children are trafficked for bonded labour, and Bengal and Bangladesh for sex trafficking. I would go there in the mornings and walk with the volunteers through the platforms and be there till about 3pm.

Then I would come back home and for the rest of the day, I wouldn’t speak a word because of what the children would tell me. I would help them fill in the forms which required them to write down their age, where they came from and if there was an address and other details. These kids do not give you details, they tell you stories and then, you have to fill the blanks. It wasn’t like one or two children.

On a daily basis in those five hours, they would have rescued around 10 children from one railway station. There were four such railway stations in Bangalore and there were bus stations. So you keep wondering where are these children coming from, and what is going to happen to them, and we keep hearing stories of children running away from home and being taken in. I had spoken to the police commissioner and I had access to go to any place that I wanted.

Then the next stage was when I started talking to various social workers, and each one of them would have these vast number of stories on children, case studies and files. It crippled me, because the extent of depravity that you see is frightening. So, you document it as a writer but there is this other part of you as a human being that makes you wonder, that why is it that we let this go past us every day and don’t even seem to react to it.

As someone who’s always been interested in mythology, I like how natural phenomena are turned around and given a kind of mythological twist. I remember somebody, I think a Czech scientist, had left a book in my house called The Dictionary of Mythology. It covered all the mythologies of the world, from Sumerian and Oceania to African myths.

I started work on a book when I was still in college and I started writing these down as stories. I’d look at stories that appealed to me and which I didn’t know of. I didn’t want to write anything that was familiar to me. I stated writing this in a notebook. Once my first two novels came out and I had built this association with my publisher, I said, “look, I have this children’s book. Would you like to take a look at it?” and it was written on one of those cool notebooks because I had written it when I was still about 18 or 19. They asked, “can we start off by doing Indian mythology?” and this book was being illustrated at the same time, so the Indian mythology and the world mythology happened at the same time.

Seventeen years ago, Ladies Coupe appeared and since then, it’s still been one of those books that have been perennially sold, discussed and talked about. The book was pretty much about women seeking their identity, and now perhaps it’s time for me to write about how women preserve their identity because so much has changed in the world from the time I wrote it.

One of the most important changes has been technology and how it has impacted our lives. The challenges that women face in this time and age are very different from the challenges they faced about 17 years ago. I like using the storytelling format a lot, whether it is the One Thousand and One Nights kind of format or the Vikram and Betal kind of format.

Eating Wasps is pretty much about various people, but specifically a group of women in a resort by a river. One day, there’s a child who suddenly goes missing and they discover her inside an old cupboard. When they open the cupboard and the child comes out, she’s got something in her hand and nobody knows what it is.

It is actually a piece of bone hidden in that cupboard. It is the bone of a lady who was a writer 50 years ago; she had killed herself at the age of 35. After her death, at the cremation ground, her lover comes and takes the bone of her index finger and hides it in the cupboard. Somehow, that cupboard lands up in the resort. So, she becomes both the narrator and anchor of the book and it ends with her story of why she killed herself. This is based on a real-life writer; not the story but the circumstances.

In 1965, there was this writer, Rajyalakshmi, who was from Kerala and was the youngest recipient of the Kerala Sahithya Academy Award. She was a lecturer of physics, had a very solid literary reputation, was financially independent and was single. One day, she just killed herself. She didn’t even leave a suicide note and nobody knew why she did it. To this day, there is a lot of speculation as to why she took her life. That was what I wanted to explore.

One of the reasons why I drown in so many genres is perhaps because I am interested in many things. I don’t think that literary fiction alone, which is what I began with, will be able to hold and contain all the subjects I want to write about.

When I chose to become a full-time writer, I was working in advertising. There was constant stimulation. I realised that if I was to become a full-time writer, I would, firstly, become jaded in the way I wrote and how I wrote. Secondly, I would become bored. I think in some ways, the reason that I write in different forms and genres is that I need to be excited about my own writing. That’s where it really begins.

Once I have arrived at a subject that I want to write about, I look at it and I ask myself, “Where would this belong best? Would this belong in the realm of literary fiction, historical fiction, or in the world of crime fiction?” And then, I just choose to use that form and write.