Shares would initially be traded on Riyadh's stock exchange, and later on a foreign exchange 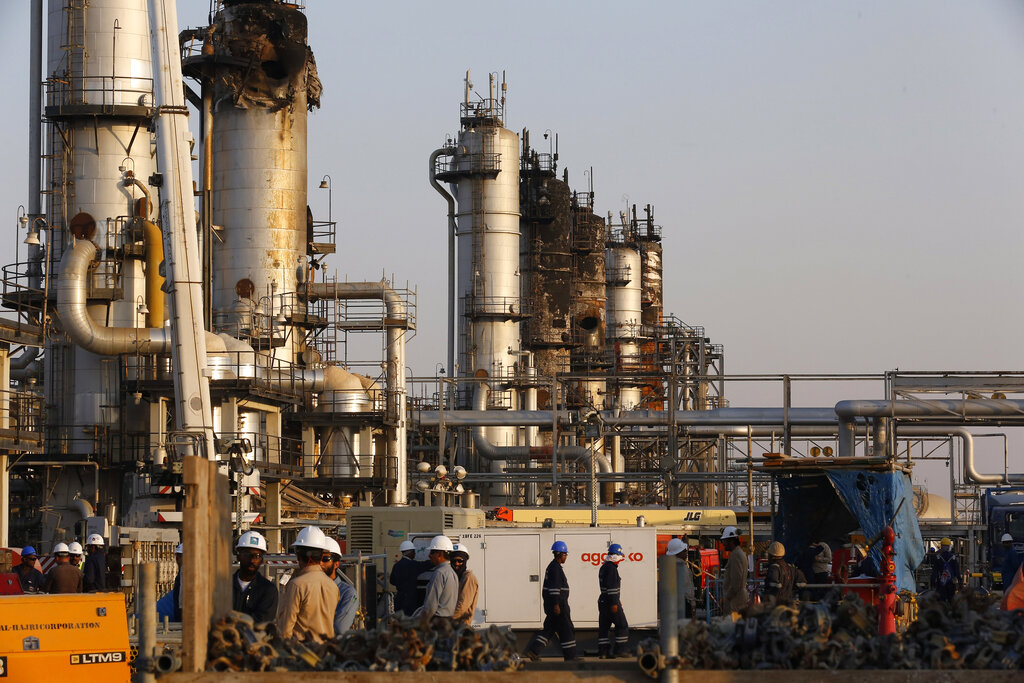 In this Sept. 20, 2019, file photo, taken during a trip organized by the Saudi information ministry, workers fix the damage to Aramco's oil separator at a processing facility after the Sept. 14 attack in Abqaiq, near Dammam, in the Kingdom's Eastern Province
AP Photo
AP   |   Dubai   |   Published 03.11.19, 07:11 AM

Saudi Arabia formally started its long-anticipated initial public offering of its state-run oil giant Saudi Aramco on Sunday, which will see a sliver of the firm offered on a local stock exchange in hopes of raising billions of dollars for the kingdom.

An announcement from the kingdom's Capital Market Authority serves as a starting gun for an IPO promised by Crown Prince Mohammed bin Salman since 2016.

Initial plans call for the firm's shares to be traded on Riyadh's Tadawul stock exchange, then to later put other shares on a foreign exchange.

Prince Mohammed hopes for a very-optimistic $2 trillion valuation for Aramco, which produces 10 million barrels of crude oil a day and provides some 10% of global demand. That would raise the $100 billion he needs for his ambitious redevelopment plans for a Saudi Arabia hoping for new jobs, as unemployment stands at over 10%.

However, economic worries, the trade war between China and the U.S. and increased crude oil production by the U.S. has depressed energy prices. A Sept. 14 attack on the heart of Aramco already spooked some investors, with one ratings company already downgrading the oil giant.

The announcement by the Capital Market Authority offered no timeline for the IPO.

'The Capital Market Authority board has issued its resolution approving the Saudi Arabian Oil Co. application for the registration and offering of part of its shares,' the authority said in its statement. 'The company's prospectus will be published prior to the start of the subscription period.'

The Saudi-owned satellite channel Al-Arabiya reported last week, citing anonymous sources, that pricing for the stock will begin Nov. 17. A final price for the stock will be set Dec. 4, with shares then beginning to be traded on the Tadawul on Dec. 11, the channel reported. The channel is believed to have close links to the kingdom's Al Saud royal family.

The kingdom has in the past used the company as a piggy bank for development companies, back when it was still an American company. Since buying a 100% interest in the firm by 1980, the royal family as its sole 'shareholder' largely hasn't interfered in the company's long-term business decisions as its revenue provides around 60% of all government revenue.

But recently, there have been decisions seemingly forced onto Aramco, including the nearly $70 billion purchase in March of the petrochemical firm Saudi Basic Industries Corp. just before SABIC announced a plunge in its quarterly profits.

In Aramco's first-ever half-year results, it reported income of $46.8 billion. Yet analysts say a $2 trillion valuation — Apple and Microsoft separately for instance are $1 trillion — may be a stretch. By announcing the start of the IPO on Sunday, Prince Mohammed may have been convinced to take a lower valuation in order to get the IPO moving. The kingdom likely is pinning its hopes on tremendous local interest to push up the company's valuation before potentially taking some of the stock abroad.

Analysts believe Aramco will list as much as 3% of the firm on the Tadawul, with another 2% put abroad.

Saudi Aramco has sought to assure investors, given the questions over its valuation and the potential hazards of future attacks or geopolitical risk. A presentation posted to Aramco's website last month announced the intent to offer a $75 billion dividend for investors in 2020. That's the payment per share that a corporation distributes to its stockholders as their return on the money they have invested in its stock.

It also pledged that some 2020 through 2024, any year with a dividend under $75 billion would see 'non-government shareholders' prioritized to get paid.

But beyond the stocks, worries persist that Saudi Arabia could be hit by another attack like the one Sept. 14, which the U.S. blames on Iran. Iran denies it launched the cruise missiles and drones used in the attack. Yemen's Houthi rebels claimed responsibility, but analysts say the weapons used wouldn't have the range to reach their targets.