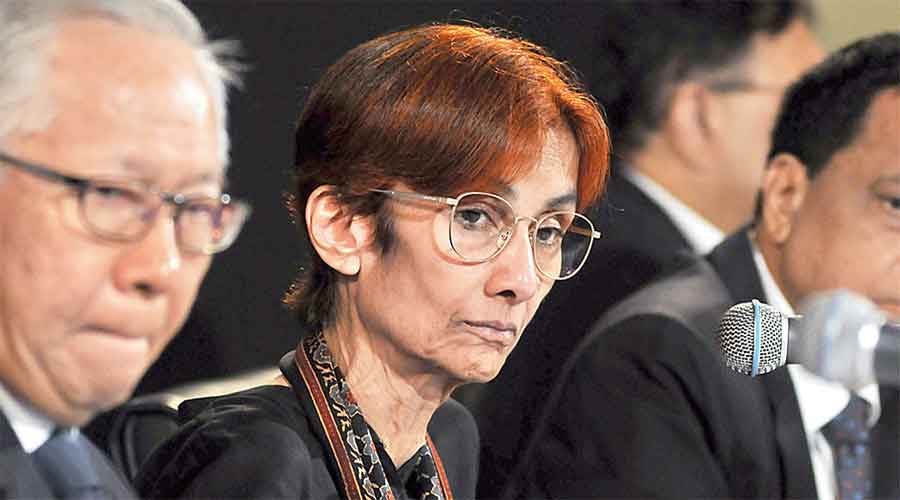 Manjushree Khaitan with other board members of Kesoram Industries.
File picture
Our Special Correspondent   |   Calcutta   |   Published 26.11.20, 01:30 AM

Kesoram Industries has received in-principle approval from its consortium of lenders to its debt recast proposal.

The plan envisages retiring the loans of  the Indian lenders by taking on fresh loans from an overseas investor. The company says the swapping of debt would infuse much needed liquidity for its operations, apart from marginally reducing debt burden.

The board of Kesoram will meet on Monday (November 30) to approve the fundraising plan from the overseas investor, which could be in the form of non-convertible debentures, among others. A communication to the bourse mentioned a combination of options, including zero coupon optionally convertible redeemable preference shares or equity shares.

Kesoram, which has 7.25 million-tonne cement capacities in south India, is likely to raise around Rs 1,800-1,900 crore from the investor.

While the identity of the overseas lender is still under wraps, the name of US-based financial powerhouse Goldman Sachs has been doing the rounds, among others.

The debt swap will provide Kesoram breathing space by enhancing its working capital to operate the cement plants at a higher capacity, and make the most of the good tidings in the cement sector in India.

While the Kesoram board will approve the fundraising plan, the Indian lenders will ratify the package before their  boards. The company is hoping to conclude the transaction by the end of the year when the holiday season kicks in the West.

The resolution plan has been prepared under the RBI (Prudential Framework for Resolution of Stressed Assets) Directions, 2019 issued by a circular on June 7, 2019.

The company management has earlier guided that the medium term target would be to bring down debt to Rs 1,600 crore and then to Rs 1,300 crore. While the generation of internal accrual will be channelised for future debt repayment, there is a possibility that the promoters of the company will also pump in fresh equity in the future.