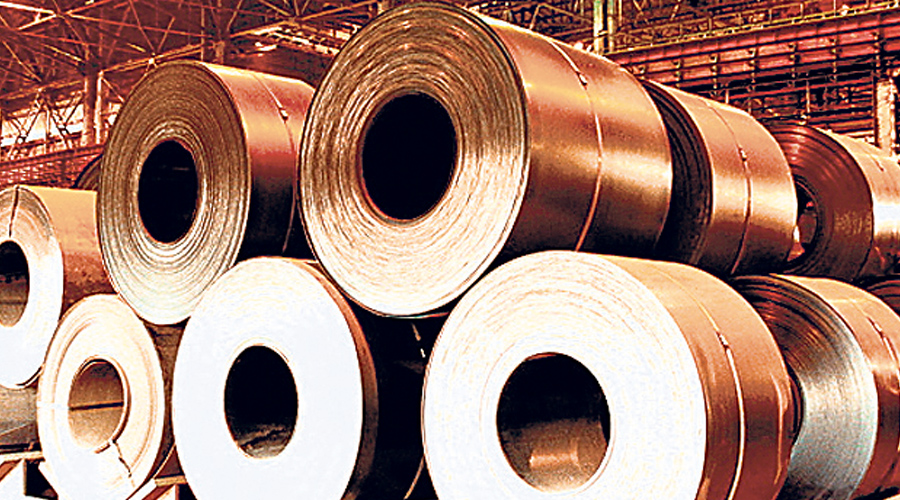 India’s steel and cement companies are witnessing a revival after getting eviscerated by the pandemic, a sign the infrastructure sector is returning to normality.

A report by CARE Ratings said the margins of steel companies were expected to grow further in the last quarter of the fiscal following a sharp drop in the first quarter and a gradual improvement in the next two quarters.

Cement companies too have retained their vigour and the industry is expected to report a volume drop of 2 per cent this fiscal after a 31 per cent contraction in the first quarter, according to Crisil.

The rating agency said the industry was  set to hit a decade-high volume growth of 13 per cent in the next fiscal, helped by an expected revival in demand from the infrastructure and urban housing sectors.
In steel, the output this fiscal is set at around 102 million (mt) a decline of 7 per cent, CARE said.

“Similarly, fall in steel consumption is estimated to be around 8 per cent to about 92 million tonnes considering that January-March is a seasonally heavy quarter for the industry.”

Meanwhile, JSW Steel has reported  a marginal decline of 1 per cent in its crude steel output at 13.06 lakh tonnes (lt) in February.

The company, which is among the top six steel producers in the country, had produced 13.20lt of steel in the same month last year.

In cement, rising power and fuel costs will impact the industry. “While volume growth will rebound, higher cost of sales would weigh on cement profitability next fiscal,” Crisil said.

Rising prices of raw materials such as diesel, pet coke or coal, and polypropylene bags may push up costs by Rs 150-200 per tonne, it said adding that freight, power and fuel constitute almost 55 per cent of the total cost of sales of cement.

“Increasing share of infrastructure and urban housing means a higher proportion of sales will be from the cost-conscious non-trade channels. That would translate to marginally lower net realisation for cement companies,” the agency said.

Crisil Ratings director Nitesh Jain said demand from the hinterland, which was a saviour for the cement industry in the pandemic impacted 2020-21, should sustain on the back of higher rural incomes.

“Higher spends on infrastructure development would be in line with the 26 per cent increase in budgetary allocation for infrastructure in the Union Budget 2021-22. That, coupled with pent-up demand in urban housing, will drive volume growth,” he said.

The steel industry, however, benefited from softer coking coal costs as well as from improved demand and realisations.

Margins in the fourth quarter will be driven by healthy export orders and higher realisations, CARE said.