Centre ready to do everything to revive pandemic-affected economy, says Sitharaman 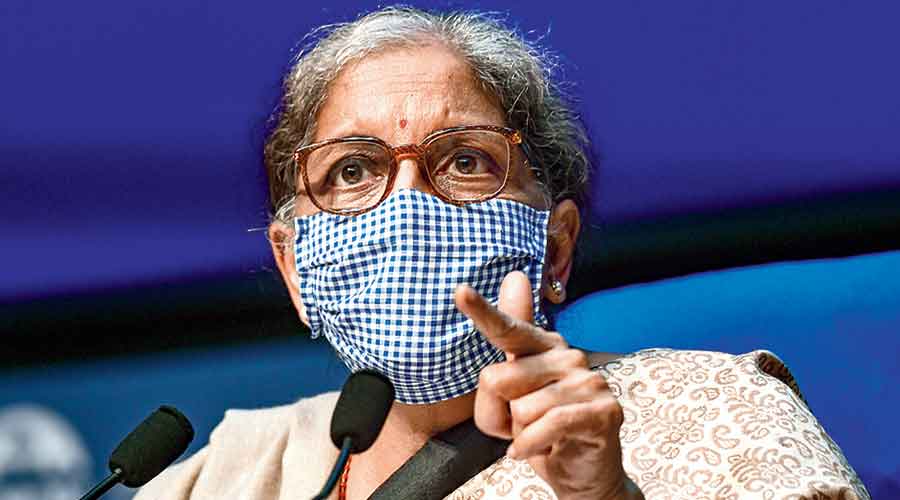 Expressing the government's commitment to continue with reforms, Finance Minister Nirmala Sitharaman on Thursday assured India Inc that it is ready to do everything required to revive and support economic growth hit by the Covid-19 pandemic.

Stressing that there is a need to promote growth as it helps bring down poverty, she however said it would not be at the cost of inflation.

RBI has been mandated to keep inflation at 4 per cent, with tolerance level of 2 per cent on either side.

Both the government and the Reserve Bank of India (RBI) are working in tandem to achieve the objective, she said while addressing the CII Annual Meeting 2021.

"You would have observed that in Modi 2.0 particularly and even earlier, the relationship with the RBI has been one of those in which we are working like partners to address the issues of the economy, even now, even during pandemic," the finance minister said.

Both are working in tandem -- monetary side is keeping the momentum in the right direction while fiscal side is being taken care of by the finance ministry and coordination continues, she said.

"Growth will be given its importance. Growth will be pushed both by the Reserve Bank and by us. We also want to assure the industry that inflation in the last 7 years has not crossed 6 per cent except seasonal variation. Inflation has been well within that band which is before us," she said.

Pointing out that she is not looking at growth versus inflation, Sitharaman said "we should attend to inflation, keep it contained, take all the necessary steps, but never forget that growth is what is going to make the difference to the economy's revival and growth is what is eventually going to remove poverty and bring in a certain level playing field for all the Indian citizens."

She further said the government is looking at being an active participant in the economic recovery.

"First thing is government is committed in doing everything that it requires to be done for the economy to be revived...,"she said.

To a question if RBI would go for monetary tightening in line with developed economies, she said, "I don't think we have reached that level. And I am glad that the RBI has been voicing that understanding..."

The central bank has not given any indication about wanting to suck out the liquidity which is available in the system, she added.

Observing that some high frequency indicators are pointing towards economic revival after unlock measures announced by many states with decline in COVID-19 cases, she said foreign direct investment (FDI) has been flowing into India non-stop despite the pandemic because there was confidence about the macroeconomic fundamentals.

"As a result, we probably were in the third or the fourth place in 2020, in getting FDI. And even this year, in the first five months of this year, we have had about 37 per cent more FDI coming into this country compared to the last year itself," she said.

Foreign exchange reserves are at USD 620 billion as of July 2021, she said, adding exports are growing as far as core industry is concerned.

Household savings are not only going to banks but also to stock markets, she said.

Importantly, due to the significant buoyancy seen in both indirect and direct taxes so far, supplemented by the likelihood of impressive disinvestment receipts this year, the government will honour GST compensation payments to the states this year, she said.

On the commitment to reforms, she said the government is dedicated to the objective and it was reflected during the pandemic when it announced long-awaited farm and labour reforms.

She also assured the industry that the government's commitment to disinvestment and privatisation announced in the Budget 2021-22 will be met.

"Yes, all that will happen. And we will push for them to happen this year. Necessary rigorous work is going on. And we therefore commit ourselves to the disinvestment which was announced in the Budget. Aside from disinvestment and privatisation, we are also looking at asset monetisation," she said.

The Centre has budgeted Rs 1.75 lakh crore from stake sale in public sector companies and financial institutions, including 2 PSU banks and one insurance company, in the current fiscal year.