Bengal makes a mark in oil and gas 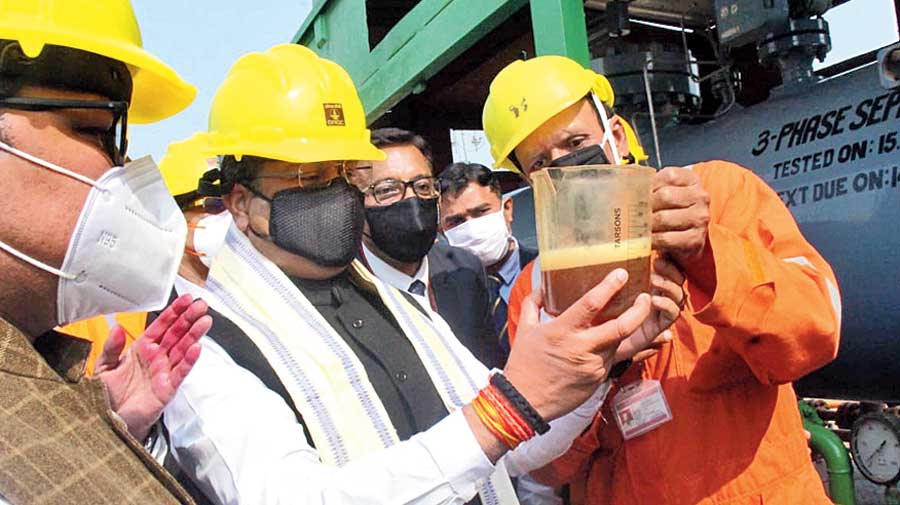 State-owned explorer Oil and Natural Gas Corporation (ONGC) took advantage of a newly prescribed policy of the Centre to position Bengal on the oil and gas map of India following its discovery at the Ashoknagar block, even as the long-term commercial viability of the hydrocarbon asset remains to be ascertained.

Around 375 barrels of crude oil, whose quality is said to be even better than India’s most prolific oil asset Bombay High, have been extracted from a well on the outskirts of this North 24 Paraganas town since September, making it the most potent hydrocarbon discovery ever made in the state.

Bengal’s Gangetic plain has always been touted as a promising place for oil and gas, but a commercially viable discovery has so far eluded ONGC which has been exploring the state for the last six decades, pouring in Rs 3,358 crore in the process.

“ONGC has finally brought success to Bengal after decades of effort. It is a momentous day in the history of the state and the country,” Dharmendra Pradhan, Union petroleum minister, said after formally switching on a sucker rod pumping unit, which lifts oil from the well, at the site.

Asked how much recoverable reserves the Ashoknagar block holds and what could be the production level and if the same would be commercially viable, the minister appeared cautious. “It is a very good beginning. Let us keep it at that for today.”

Three more wells will be drilled by January 2022 to ascertain recoverable reserves from the field and if it could be brought to a sustained commercial production thereafter.

Senior ONGC officials, including chairman and managing director Shashi Shanker, who spent the early years of his career looking for elusive oil and gas in Bengal, sounded optimistic of the prospect.

A year to go before he demits office, Shanker is convinced that Ashoknagar holds the brightest prospect to put the state in the oil and gas map that can spur economic development in the region. “From the look of it, this has all the potential to become viable,” he told The Telegraph.

Early signs buoyed ONGC to acquire three more blocks adjacent to Ashoknagar, which will be explored simultaneously over the next three years and 13 more wells will be drilled. The total capex will be around Rs 425 crore.

ONGC officials said the field appears to have more natural gas reserves than oil. The upper layer, around 2,268 metres beneath the surface, holds oil while the gas sits another 100 metres below.

A second well will soon be drilled to test the gas but it would not be sold commercially as the gas price remains low. An ONGC official said the block may be viable if the crude oil price remains at $50-55 a barrel. Benchmark Brent crude is now ruling at $52 a barrel.

“Commercial viability would depend on how big the installation would be. It is going to be a factor of cost incurred and recoverable reserve,” an official said.

ONGC drilled the solitary well at the site in September 2018 and found hydrocarbons. Around 800 barrels of oil were extracted then. After the new DGH policy came into force, it swung into action again and 375 more barrels were produced. It sent 172 barrels to IOC in September and another 200 barrels by tankers in November.

With the state election round the corner, an early development plan for Ashoknagar 1 was approved by the DGH and the petroleum mining lease was granted on October 21 for 5.88 square kilometre area.

However, a challenge before ONGC would be to acquire enough land to start large scale commercial production. If the volume is high, a pipeline must be built to evacuate gas/oil. Pradhan sought the co-operation of the local people and assured they would be looked after first.

ONGC has initially asked for 12 acres from the state government but more would be needed later. Even though the area identified initially is vested with the state, the occupiers are demanding jobs at the site. The company has given temporary jobs to 14-15 local youth so far.

The PSU declared Ashoknagar a producing field based on two years of exploration, taking advantage of the policy of early monetisation of hydrocarbon discovery declared by the directorate of general hydrocarbon (DGH) on June 25, 2020.

Under this programme, a discovery need not go through the time tested process of appraisal, declaration of commerciality and submission of field development plan before selling oil or gas in the market. ONGC sold crude oil extracted from Ashoknagar block to Indian Oil Corporation and found the product to be of superior quality.

Given that ONGC started to commercialise the small quantity produced during the exploration stage from Ashoknagar, located about 55 kilometre north-east of Calcutta, and shared part of the proceeds with the government as per contract, Bengal basin has been elevated as the 8th producing basin of India.

Bengal basin — Ashoknagar only a small part of it — is spread over 1.22 lakh square kilometre, two-third of which is offshore.

Had it not been for the new policy, which is aimed at fast tracking energy security of the country, ONGC would have to assess the recoverable reserve, make a field development plan, ascertain commercial viability and sign a petroleum mining lease, encompassing three to four years, before starting producing commercially.