The state government has promised Rs 894 crore in relief after Chhath to farmers in 19 districts whose crops were damaged in the floods. 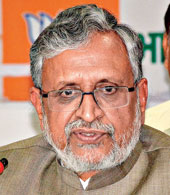 Patna: The state government has promised Rs 894 crore in relief after Chhath to farmers in 19 districts whose crops were damaged in the floods.

Deputy chief minister Sushil Kumar Modi made the announcement a day after the state government promised to repair roads damaged by the floods earlier this year.

Sushil said the damage to crops in 6,52,000 hectares because of floods was estimated at Rs 894 crore. The maximum loss was reported from East Champaran, West Champaran, Darbhanga and Purnea districts. Farmers will be compensated at the rate of Rs 6,800 per hectareof non-irrigated land and Rs 13,500 per hectare of irrigated, agriculture land. In case of sugarcane growers, the amount will be Rs 18,000 per hectare.

Immediately after the floods, Sushil said, the state government had distributed Rs 2,300 crore among 38 lakh flood-hit families (Rs 6,000 to each family). The amount was transferred to their accounts through real time gross settlement.

He also said that 32 lakh families were given food packets including rice, pulse, potato, soyabean, salt and other materials during the floods.

Around 1,71,00,000 people in 19 districts were hit by floods this year that claimed 514 lives apart from devastating infrastructure in the state. "Joint effort by the central government and state governments ensured there was no delay in flood relief," Sushil claimed.

On Tuesday, principal secretary of the road construction department Amrit Lal Meena had directed executive engineers posted in flood-hit districts to initiate repair of roads damaged in floods. He said a meeting on October 12 had laid the guidelines for repair of damaged roads.