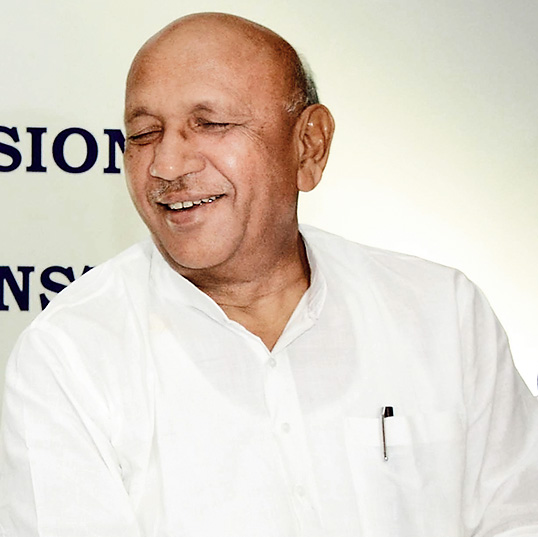 Jharkhand minister Saryu Roy has written to Bihar chief minister Nitish Kumar calling for a probe into the role of the water resources department in giving a clean chit to a blacklisted private company bidding for tenders worth Rs 1,000 crore to construct 11 power grid substations in the neighbouring state.

The clean chit, that too with retrospective effect, was given to Flowmore Limited by Bihar’s then principal secretary, water resources, Arun Kumar Singh, in March 2018. Singh is at present the state’s development commissioner, the topmost officer after the chief secretary in Bihar’s bureaucratic pecking order.

Contacted by The Telegraph, Singh said he had rescinded his order repealing the blacklist two days after issuing it. Flowmore, he said, has appealed against the order in Patna High Court and the case is now sub judice.

In his letter, a copy of which is with The Telegraph, Saryu says that Flowmore Limited was trying to get tenders of Jharkhand Urja Vikas Nigam Limited (JUVNL) advertised in December 2017 and January 2018 for 132/33 KV 2x15 megawatt grid substations.

While expressing its interest to bag the contracts, Saryu’s letter says, Flowmore Limited submitted a mandatory affidavit regarding its eligibility, but did not disclose that it had been blacklisted by the Bihar water resources department’s engineer-in-chief on July 1, 2016, for 10 years.

Saryu has alleged that the company did so with the motive of obtaining the contract which is not given to companies that are blacklisted or debarred by central or state governments.

“A technical committee constituted by JUVNL came to know about Flowmore Limited being blacklisted by the Bihar government for 10 years, and it refused to open the financial bid made by the company, following which it (Flowmore) appealed before the then Bihar WRD principal secretary to repeal the order,” Saryu has written in the letter.

An affidavit submitted to JUVNL by one Raihan Ahmad, claiming to be the authorised representative of Flowmore Limited, says the firm “has not been blacklisted or banned or debarred by any state government in India or central government or any undertaking thereof for submission of tenders”. The affidavit has been prepared before the notary in Ahmedabad in Gujarat, and gives the company’s Ahmedabad address. The affidavit is dated January 17, 2018.

Calls from this newspaper to a telephone number mentioned in Flowmore Limited’s seal on the affidavit did not elicit any response.

The Jharkhand minister states that the water resources principal secretary repealed the order blacklisting the firm through a letter issued on March 13, 2018. After this, Saryu says, the Bihar principal secretary passed a supplementary order on April 24, in which the blacklisting of Flowmore Limited was repealed with retrospective effect from July 1, 2016 (the day the company was blacklisted).

Saryu has also pointed out that the principal secretary issued yet another order on May 4, 2018, to restore the registration of the company with the department with retrospective effect. Singh was appointed development commissioner on August 22.

“I request an inquiry into the orders issued by the WRD principal secretary in haste and decisions in this regard as per the law,” Saryu has written in the letter to Nitish. The Jharkhand minister has attached relevant supporting documents with his letter for Nitish’s perusal.

Reached for a comment, Bihar development commissioner Singh told The Telegraph: “The order to remove the company from the blacklist was rescinded by me two days after it was passed. Flowmore Limited has appealed against the recall order in Patna High Court. The matter is sub judice and the high court has remanded the case back to the department to hear it again.”

Flowmore was blacklisted by water resources engineer-in-chief Ram Pukar Ranjan after vital pipelines installed at the Daha river irrigation project (in Saran) cracked in 2015, bringing irrigation facilities to a halt. A flying squad team of the department was sent there to probe the mishap, which found that the company had not installed vital expansion joints in the pipelines, which expanded during summer months due to heat and cracked. Other parts of the project also got damaged in this.

“The company had not installed even a single expansion joint through the 6km length of the steel pipeline. Expansion joints in steel pipelines are as basic as gaps left between railway lines. It was a gross negligence by the company to save on cost, labour and time, hence it was blacklisted,” a senior water resources official associated with the Daha irrigation project told The Telegraph on the condition of anonymity.

Water resources engineer-in-chief (headquarters) Arun Kumar said Flowmore had appealed in the court of the principal secretary. It also installed expansion joints in the pipeline and made it functional.

“The principal secretary was satisfied with the arguments of the company and its blacklisting was removed and the registration was also restored. These could be done with retrospective affect,” Arun Kumar said.