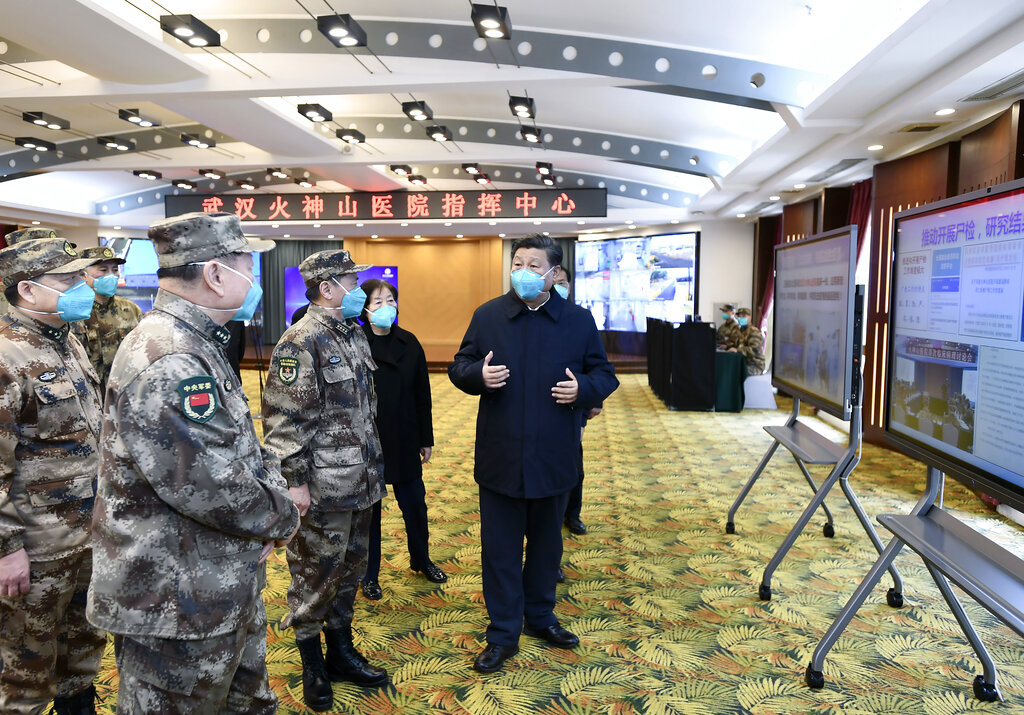 Chinese President Xi Jinping on Tuesday made his first visit to Wuhan since a coronavirus outbreak forced an unprecedented lockdown of the central city of 11 million people, in a sign that authorities’ efforts to control the virus are working.

Xi’s arrival came on the same day that Wuhan shut the last of 14 makeshift hospitals opened to manage a surge in coronavirus patients that had overwhelmed the city’s health care system, news website The Paper reported.

Earlier on Tuesday, China announced that it had just 19 new coronavirus infections on Monday, down from 40 a day earlier. That also marked the third straight day of no new domestically transmitted cases in mainland China outside of Hubei province, where Wuhan is located, even as the disease spreads rapidly in other countries, including Italy and the US.

News of Xi’s Wuhan visit gave a lift to Chinese stocks, with the blue-chip index ending the day 2.1 per cent higher after falling into negative territory in morning trade.

“It is obvious that Xi could not have visited Wuhan earlier because the risk of him contracting the virus there was initially too high,” Zhang Ming, a professor at Renmin University in Beijing, told Reuters. “He is there now to reap the harvest. His being there means the CCP (Chinese Communist Party) may declare victory against the virus soon,” Zhang said.

China came in for criticism at home and globally over its early response to the outbreak, suppressing information and downplaying its risks, but its draconian efforts at control, including the lock-down of Wuhan and Hubei province, have been effective at curbing the spread.

Also on Tuesday, Hubei said it would implement a “health code” system to allow people in areas at medium or low risk to start travelling.

Qianjiang, another city in Hubei, said that all traffic checkpoints will be removed, public transportation will restart and firms will resume work in the near future, according to a report on an official website.

During his trip to Wuhan, Xi will “visit and express regards to medical workers, military officers and soldiers, community workers, police officers, officials and volunteers who have been fighting the epidemic on the front line, as well as patients and residents during the inspection”, state news agency Xinhua said.

Separately, Taiwan’s government said a second round of evacuations of its citizens stranded in Wuhan had begun, after weeks of arguments between the Chinese-claimed island and Beijing over the arrangements.

Of the new coronavirus cases announced by China on Tuesday, 17 were in Wuhan. Two others — in Beijing and Guangdong province — involved people who had arrived from Britain and Spain, respectively.

That brings the total number of confirmed cases in mainland China so far to 80,754.

Chinese authorities have ramped up warnings about the risks from foreigners and Chinese nationals travelling to China from viral hot spots abroad such as Iran and Italy. As of Monday, there were 69 imported cases.

Globally, more than 114,300 people have been infected by the coronavirus and over 4,000 have died, according to a Reuters tally of government announcements.

Since the outbreak, 59,897 patients have been discharged from hospitals in China. Recently discharged patients need to go into quarantine for 14 days.

Xi, who was mostly absent from Chinese state media coverage of the crisis in its early days, has become far more visible in recent weeks.