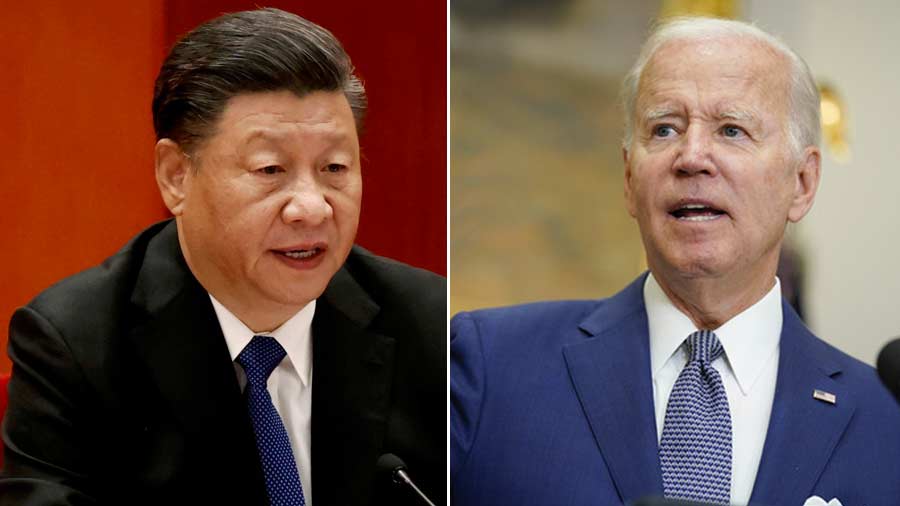 Chinese President Xi Jinping and his US counterpart Joe Biden plan to hold their first in-person meeting at the G20 summit in November, American officials said on Friday, amid Beijing's high-voltage rhetoric over the US House Speaker Nancy Pelosi's planned visit to Taiwan.

Pelosi's plans to visit Taiwan, which will be the first by a high-powered US leader to the breakaway province has riled up China, so much so that Xi, in his over two hour-talk over the phone with Biden on Thursday said China firmly opposes separatist moves towards Taiwan independence and those who play with fire will perish by it .

China claims the self-governing Taiwan as part of the mainland and has repeatedly vowed to reunify it, even by force.

The two leaders did agree to begin arrangements for a face-to-face summit, their first, as Xi resists travel amid the COVID-19 pandemic, CNN quoted US officials as saying after the meeting.

The Chinese Foreign Ministry declined to comment on whether Xi and Biden planned to meet during the G20 summit in Bali to be held on November 15-16.

Indonesian President Joko Widodo during his visit to Beijing on Tuesday formally invited Xi to the G20 summit, but it is not clear whether the Chinese leader would attend in person.

Xi, 68, has not travelled out of China since the end of 2019 after COVID-19 surfaced in Wuhan and later spiralled into a pandemic.

He visited Hong Kong on July 1 to participate in the 25th-anniversary celebrations of handing over of Hong Kong to China from British rule.

Observers say he could attend the Bali summit as by that time he would have been endorsed by the ruling Communist Party of China (CPC) for a rare five-year third term, which will reinforce his authority as top leader of the world's second largest economy. All of Xi's predecessors, except CPC founder Mao Zedong had retired after two-five years terms.

The one-in-a-five-year-Congress of the CPC, which is planned to be held in the coming months, expected to endorse Xi's third term as he is equated with Mao and may continue to remain in power for life.

While Xi and Biden in their much-publicised phone call discussed certain areas of cooperation, including climate change, the Taiwan issue proved among the most contentious.

Pelosi's threat to visit Taiwan has emerged as a serious point of conflict, as US officials fear a more imminent Chinese move on self-governing could lead to the situation spiralling out of control.

Chinese observers say that if Pelosi goes ahead with the visit it could seriously dent Xi's popularity and authority at home.

Xi told Biden in their fifth virtual meeting on Thursday that the position of the Chinese government and people on the Taiwan question is consistent, and resolutely safeguarding China's national sovereignty and territorial integrity is the firm will of the more than 1.4 billion Chinese people.

The public opinion cannot be defied. Those who play with fire will perish by it. It is hoped that the US will be clear-eyed about this. The US should honour the one-China principle and implement the three joint communiqu s both in word and in deed , an official statement issued by the Chinese Foreign Ministry after the late Thursday night talks quoted him as saying.

A While House official who briefed the media about the meeting on Friday however played down Xi's fiery rhetoric on Taiwan.

I will note that President Xi used similar language in the conversation that the two leaders had back in November. But, you know, I'm not going to get into parsing the various metaphors that the PRC regularly tends to use on these issues , the official said according to the official White House transcript.

The official said, the conversation between the two about Taiwan: It was direct and it was honest. And the two leaders, you know, basically discussed the fact that the United States and China have differences when it comes to Taiwan but that they have managed those for over 40 years, and that keeping an open line of communication on this issue is essential to continuing to do so.

And for us, you know, direct communication between the leaders is the most essential aspect of that, he said.

The Chinese official media for its part has ratcheted up rhetoric saying Pelosi could go ahead with her visit challenging Beijing's redlines.

In my opinion, there will be a military crisis if Pelosi insists on visiting Taiwan , Hu Xijin, the former editor of the state-run Global Times known for his caustic commentaries, said.

I believe the Chinese mainland will take every measure to undermine her visit. The mainland will launch a no-fly zone over Taiwan , he said in his video analysis posted in the Global Times online edition.

Or even the PLA aircraft will fly to the island along with her visit. Everything is possible, if Washington doesn't stop Pelosi from visiting Taiwan, he said.

It (the US) has to prepare for a military conflict with China. The mainland public is impatient with the provocation of Taiwan's independence. Pelosi's visit might accelerate military showdown, he said.

The Chinese military has already said it would take countermeasures if Pelosi went ahead with the visit, and the US military is reportedly planning to increase its own forces and military assets in the Indo-Pacific region.

Military watchers say the superpowers' respective approaches could easily lead to a risk of conflict.

According to a CNN report, the US administration officials have been working quietly over the past week to convince Pelosi of the inherent risks in visiting Taiwan.

Defence Secretary Lloyd Austin on Wednesday said that he had spoken to Pelosi to provide his "assessment of the security situation."

Pelosi has not made any announcements about her plans for a trip, which hasn't been finalised.

"I never talk about my travels. It's a danger to me," she said on Wednesday. Chinese experts noted that the issue of tariffs, which the US imposed on Chinese goods during Trump's Presidency was not mentioned in the Chinese press release although it was mentioned many times by the US media as a possible bargaining chip.

Jin Canrong, associate dean of the School of International Studies at the Renmin University of China, told the Global Times that due to Pelosi's planned visit to Taiwan and the Chips and Science Act passed by the US Senate, China-US ties are getting more and more intense.

But even under this situation, the two leaders can still have a conversation, so this is at least good for the two countries to stabilise and manage the tension, he said.

L Xiang, an expert on US studies at the Chinese Academy of Social Sciences, told the daily that when recession and inflation come at the same time, it would become a "double-edged sword", as it would be difficult for Washington to find a perfect solution that can effectively deal with the two issues.

Under such a scenario, the US needs to settle relations with other major powers, create a better external environment for it to focus on fixing its own economic problems, Lu said.

Due to the toxic political atmosphere in the US, officials and politicians in Washington seem to prefer to secure their own positions by worsening ties with other major powers, L added.