Evacuees, some elderly, sat around plastic tables in a sports centre in the nearby town of Ronda, as volunteers brought in bottled water, chairs and supplies 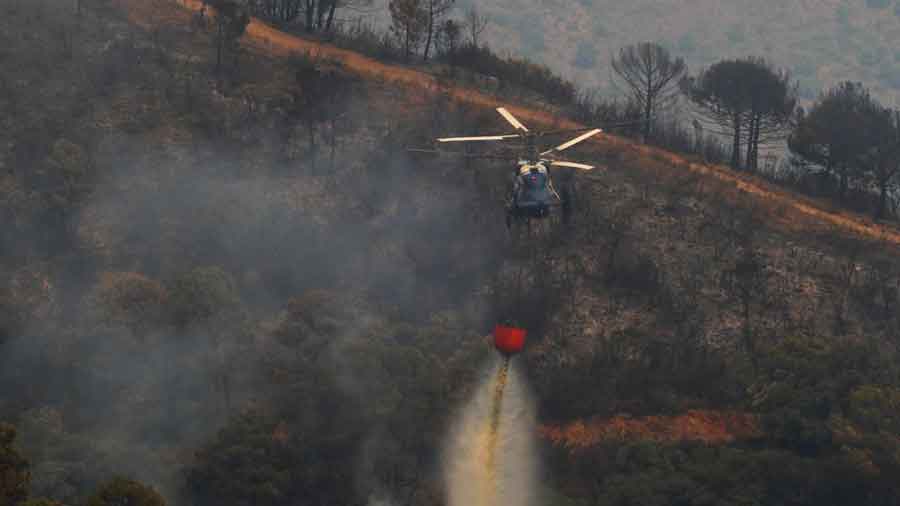 People fled their homes in six more Andalusian towns and villages on Sunday as Spain sent in a military unit to help tackle blazes raging close to a Costa del Sol resort.

A wildfire fanned by strong winds has now driven out close to 2,000 people and killed one emergency worker since it erupted on Wednesday in the mountainous Sierra Bermeja above Estepona, a popular spot with British tourists and retirees.

Evacuees, some elderly, sat around plastic tables in a sports centre in the nearby town of Ronda, as volunteers brought in bottled water, chairs and supplies.

“It’s all been very fast and efficient to tell you the truth, but we’re a bit nervous because we don’t know what is going to happen,” said computer scientist Abraham Lopez, who was evacuated from his home in Genalguacil.

Emergency crews also cleared people from the towns and villages of Jubrique, Farajan, Pujerra, Alpandeire and Juzcar on Sunday in the hills where the fire is burning amid high late-summer temperatures.

Five other communities were evacuated on Friday.

The fire had an “unusual power and strength” and was advancing in several directions, Alejandro Garcia from the forest fire agency’s operational centre told reporters.

Prime Minister Pedro Sanchez announced the deployment of a Military Emergency Unit to help tackle the blaze. “We will work in coordination and without rest in the face of the fire that is devastating the province of Malaga,” he said on Twitter.