In Paris, DW's Kevin Tschierse was looking to buy a suit to wear to his best friend's wedding and ended up in the shop owned by the tailor to the newly reelected French president 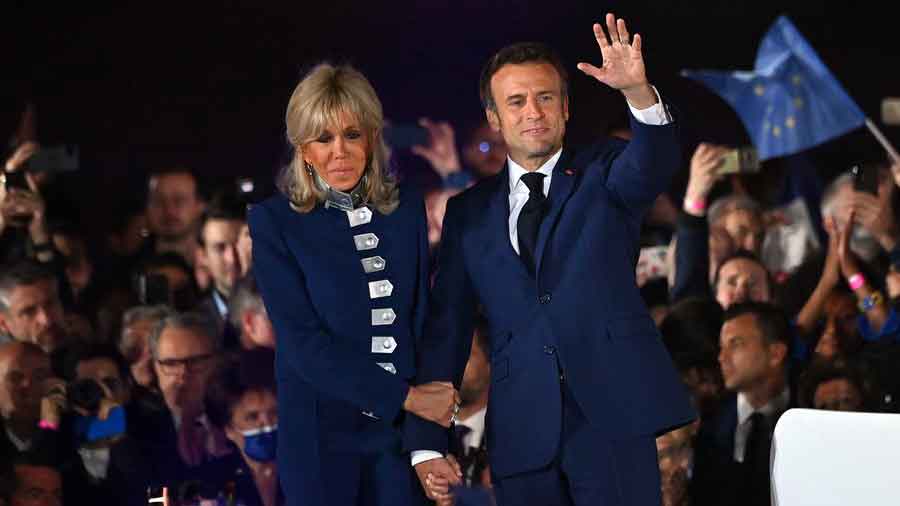 What do you wear to a wedding in Paris?

With nothing more fancy than a pair of patent leather shoes in my bag, that question was on my mind when I arrived in Paris in March for one of my best friends' big days. a decidedly well-dressed acquaintance suggested that I go to the tailor to Emmanuel Macron. Jonas & Cie offers affordable suits for festive occasions, he said.

I took his advice and set off for the traditional textile district of Paris. The Sentier district, nicknamed Silicon Sentier for the many Internet companies and startups that have settled in the area, is not far from the Louvre. The streets are full of smartly-dressed people. For Jonas & Cie, the location couldn't be better for attracting customers.

The shop is on a quiet street behind an inconspicuous door: no showroom, no display windows visible from the street. Did I have the wrong address? It wasn't until I had walked past the front door a few times that I heard a flurry of activity from the open windows on the second floor. Then I noticed the sign that read, Jonas & Cie. I had found him: the French president's tailor.

Laurent Touboul, the owner of Jonas & Cie, was already waiting for me; we had an appointment. After a friendly greeting, we were on first-name basis right away. A busy man, he immediately disappeared in the dressing room with a customer, however. I sipped an espresso while waiting in the entrance area, which is lined with trophy photos of famous personalities in chic tailored suits.

Macron has been a regular customer since 2016. "Many of our customers are ministers," Laurent said, adding that he also caters to actors, singers, presenters and other public figures. The company has been offering suits at comparatively low prices since 1984.

Clothes make the man, suits make presidents
Macron first approached Laurent when he was economy minister under President Francois Hollande. "One of his employees, a long-time customer of mine, contacted me back then and asked if I could dress his boss," Laurent says. "With pleasure. I told him."

The fact that Macron turned to a tailor the French would regard as moderately priced was also a political move. The media paid close attention to politicians' lifestyles ahead of the 2017 presidential election.Macron's strongest opponent, Francois Fillon, who for months was considered a favorite for the office, stumbled into a corruption scandal that also involved his expensive suits.

"Journalists widely reported on Fillon's suits during the 2017 election campaign, comparing them to Macron's suits," said Touboul, who remembers that, even then, Macron bought suits at his store for less than €400. "Fillon's suits were many times more expensive," he said, which paid off for Macron.

Former presidents including Francois Mitterrand, Jacques Chirac and Giscard d'Estaing spent a lot of money on suits. Today, however, it would be fatal for a politician to buy overpriced suits, Laurent said. Many French people have trouble paying their bills at the end of the month, he said, arguing that when people "see a president or a minister spend €5,000 or €10,000 on a suit, they say, 'That's impossible! That's not reasonable. That's not decent.'" People nowadays condemn such behavior, he said.

Laurent Touboul took over the store from his father, who founded it in 1984
Deutsche Welle

According to the men's magazine GQ, business suits can be had for as little as €100 ($105), but customers will have to compromise on the quality of the stitches, material and so on. For a tailored suit, men in Europe shell out anywhere between €200-€500 ($211-$527) for independent suitmakers and designer labels increasingly looking to sell quality products at lower prices. As far as prices for tailored suits from established designers are concerned, the sky is the limit.

Political fashion codes
Macron is very sociable during fittings, Laurent said. He has few extra wishes and is open to suggestions. But Laurent usually has to give in on one question of style, and that is the choice of color. "The president very often wears navy blue suits, with a navy blue tie and black shoes. That's a bit of the code of politicians and young people entering the workforce, in banks, in finance, in auditing."

Navy blue is a trendy color, Laurent said. "Seven out of 10 suits we sell are navy blue." Macron also wore a navy blue suit on the evening of the presidential election. The tailor hopes the reelected president "can continue his work with boldly and successfully."

I, for one, am happy with my Paris souvenir, which cost me about the same amount that Macron spends on his suits. At the wedding reception, the anecdote that I was wearing an outfit from the president's tailor went over well. It turned out that the groom, too, was wearing a Jonas & Cie suit for the wedding ceremony, at a Paris synagogue.