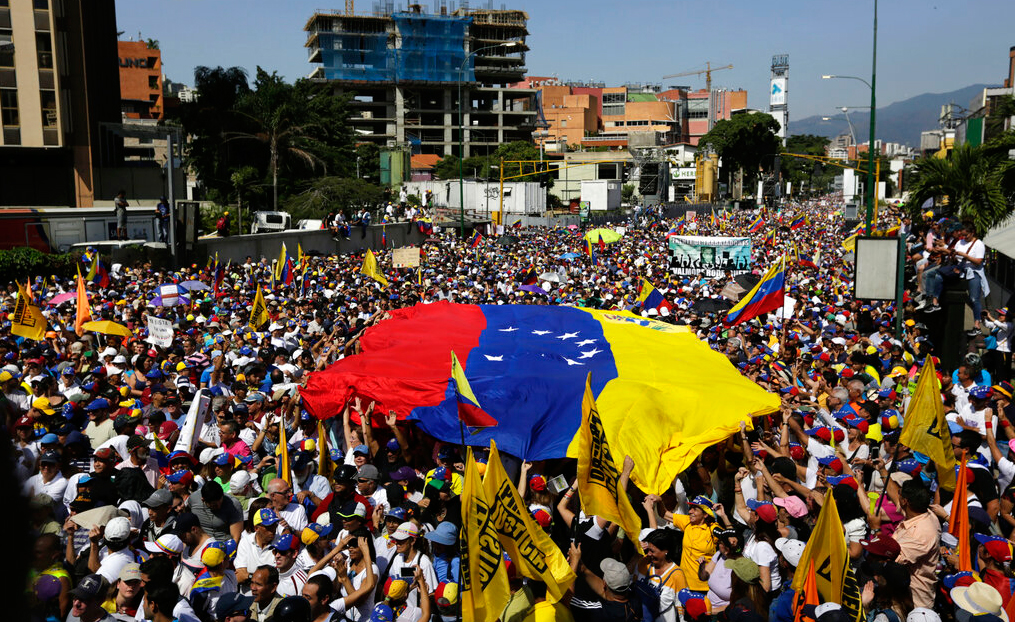 A Venezuelan air force general defected from the administration of President Nicolas Maduro on Saturday and called on his compatriots to participate in protests against the socialist leader's rule.

In a YouTube video, Yanez said: 'The transition to democracy is imminent.' He described Maduro as a dictator and referred to Guaido as his president, but refused to say whether he is still in Venezuela or has left the country.

In a brief phone conversation with The Associated Press the officer confirmed, from a Colombian number, the veracity of his declaration and said he would not provide further statements until given authorization by 'the commander-in-chief of the legal armed force which is President Juan Guaido.'

In the video, Yanez claimed that '90 percent' of the country's armed forces are against Maduro.

The military controls some of Venezuela's key assets including the state run oil company, and until now, its top brass has helped Maduro to survive rounds of mass protests in 2014 and 2017 by jailing activists and repressing protesters.

But it is unclear how much concrete military backing there is for Guaido.

Shortly after protests broke out against Maduro last week, Venezuela's most important regional military commanders and its defense minister issued a statement in support of Maduro, describing Guaido as a coup monger backed by the United States.

On Saturday, Venezuela's aerospace command of the armed forces shared a picture of Yanez on its Twitter account with the words 'traitor' above it.

'We reject the declarations made by General Yanez who betrayed his oath of loyalty to our nation and chose to follow foreign plans,' the command wrote.

Meanwhile, streams of marchers walked from middle-class and poor neighborhoods to gather at points across the capital of Caracas for a demonstration to demand Maduro's resignation and a transitional government that will hold new elections in the South American country.

Xiomara Espinoza, 59, said she felt a change of energy in the crowd, whose hopes for a political transition in Venezuela have previously been dashed.

'We are around the corner from freedom,' Espinoza said, banging on a pot and wearing a Venezuelan flag. Espinoza said 23 of her nieces and nephews have left Venezuela due to the country's spiraling economic crisis, which has caused widespread food shortages and hyperinflation expected to surpass 1 million percent this year.

Maduro has described the protests as part of a US-led coup attempt and called on his supporters to organize their own march on Saturday in defense of his Bolivarian Revolution.

By noon, pro-government marchers could be seen gathering at street corners in the center of the city. They were dressed in red, the color of Venezuela's ruling socialist party.

Zeleyka Muskus, a 53-year-old tax collector from Caracas, blamed the opposition for the country's current economic woes, saying that they have staged years of protests that have gotten people injured and killed.

'Chavez is the love of my life' she said, referring to the late Venezuelan president. 'We want this country's sovereignty to be respected.'

Other public workers attending the pro-government demonstration said they had been forced to go there by their bosses.

One marcher told the AP he was bused in to Caracas last night from the city of Puerto Ayacucho, which is 14 hours away from the capital. He asked not to have his name published over fear of reprisals and said he worried about losing his government job if he did not attend.

This month's protests have received overwhelming support from abroad, with the US, Canada and many others already recognizing Guaido as Venezuela's legitimate leader.

Guaido argues that Maduro's re-election last year was rife with fraud, and he has invoked two articles of Venezuela's constitution which he says give him the right to assume presidential powers.