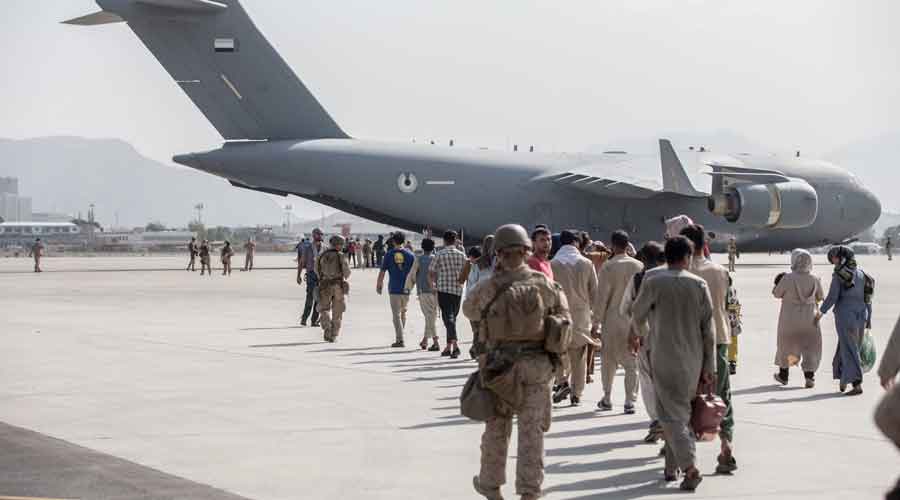 A US airstrike on Sunday targeted a vehicle carrying multiple suicide bombers from Afghanistan's Islamic State affiliate before they could target the ongoing American military evacuation at Kabul's international airport, officials said.

There were few initial details about the incident, as well as a rocket that struck a neighborhood just northwest of the airport, killing a child.

The two strikes initially appeared to be separate incidents, though information on both remained scarce.

The strike came as the United States winds down a historic airlift that saw tens of thousands evacuated from Kabul's international airport, the scene of much of the chaos that engulfed the Afghan capital since the Taliban took over two weeks ago.

After an Islamic State affiliate's suicide attack that killed over 180 people, the Taliban increased its security around the airfield as Britain ended its evacuation flights Saturday.

US military cargo planes continued their runs into the airport Sunday, ahead of a Tuesday deadline earlier set by President Joe Biden to withdraw all troops from America's longest war. However, Afghans remaining behind in the country worry about the Taliban reverting to their earlier oppressive rule something fueled by the recent shooting death of a folk singer in the country by the insurgents.

Taliban spokesman Zabihullah Mujahid earlier said in a message to journalists that the US strike targeted a suicide bomber as he drove a vehicle loaded with explosives. Mujahid offered few other details.

Two American military officials, who spoke on condition of anonymity to discuss military operations, called the airstrike successful. They said the strike caused significant secondary explosions indicating the presence of a substantial amount of explosive material in the vehicle.

The strike was the second by America since the airport suicide bombing. On Saturday, a strike in Nangarhar province killed an Islamic State member believed to be involved in planning attacks against the United States in Kabul. The strike killed one person, spokesman Navy Capt William Urban said.

The rocket attack meanwhile struck Kabul's Khuwja Bughra neighborhood, said Rashid, the Kabul police chief who goes by one name. Video obtained by The Associated Press in the aftermath of the attack showed smoke rising from building at the site around a kilometer (half a mile) from the airport.

No group immediately claimed the attack, however militants have fired rockets in the past.

Meanwhile, the family of a folk singer north of Kabul say the Taliban killed him.

The shooting of Fawad Andarabi came in the Andarabi Valley for which he was named, an area of Baghlan province some 100 kilometres (60 miles) north of Kabul. The valley had seen upheaval since the Taliban takeover, with some districts in the area coming under the control of militia fighters opposed to the Taliban rule. The Taliban say they have since retaken those areas, though neighboring Panjshir in the Hindu Kush mountains remains the only one of Afghanistan's 34 provinces not under its control.

The Taliban previously came out to Andarabi's home and searched it, even drinking tea with the musician, his son Jawad Andarabi told the AP. But something changed Friday.

He was innocent, a singer who only was entertaining people, his son said. They shot him in the head on the farm.

His son said he wanted justice and that a local Taliban council promised to punish his father's killer.

Mujahid, the Taliban spokesman, told the AP that the insurgents would investigate the incident, but had no other details on the killing.

Andarabi played the ghichak, a bowed lute, and sang traditional songs about his birthplace, his people and Afghanistan as a whole. A video online showed him at one performance, sitting on a rug with the mountains of home surrounding him as he sang.

There is no country in the world like my homeland, a proud nation, he sang. Our beautiful valley, our great-grandparents' homeland."

Karima Bennoune, the United Nations special rapporteur on cultural rights, wrote on Twitter that she had grave concern over Andarabi's killing.

We call on governments to demand the Taliban respect the #humanrights of #artists, she wrote.

There is mounting evidence that the Taliban of 2021 is the same as the intolerant, violent, repressive Taliban of 2001," she wrote on Twitter. 20 years later. Nothing has changed on that front.

Meanwhile on Sunday, private banks across Afghanistan resumed their operations. However, they limited withdrawals to no more than the equivalent of 200 a day.

While some complained of still being unable to access their money, government employees say they haven't been paid over the last four months. The Afghani traded around 90.5 to 1, continuing its depreciation as billions of dollars in the country's reserves remain frozen overseas.