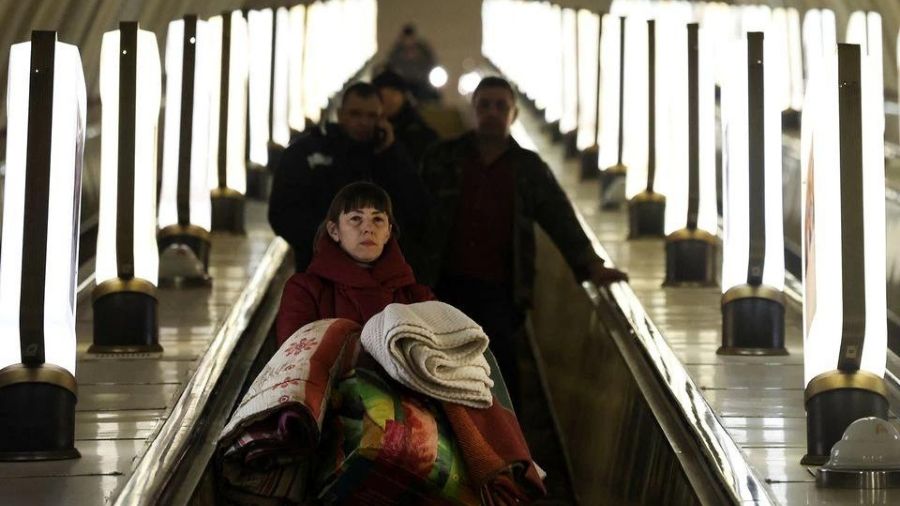 A local resident arrives at a shelter inside of an underground metro station as Russia's invasion of Ukraine continues, in Kyiv.
Reuters
Yoshita Singh   |   United Nations   |   Published 03.03.22, 07:02 AM

The 193-member UN General Assembly condemned Russia's invasion of Ukraine and demanded that Moscow completely and unconditionally withdraw all of its military forces from the territory of Ukraine, adopting a resolution on which India abstained.

The resolution titled Aggression against Ukraine' was co-sponsored by 96 UN Member States and received 141 votes in favour, 34 abstentions and five nations voting against.

The adoption of the General Assembly resolution is symbolic of the opinion of the larger UN membership on Russia's actions against Ukraine.

The resolution condemns the February 24 declaration by Russia of a special military operation in Ukraine and reaffirms that no territorial acquisition resulting from the threat or use of force shall be recognized as legal.

It also condemned Moscow's decision to increase the readiness of its nuclear forces.

The resolution reaffirms the commitment of the General Assembly to the sovereignty, independence, unity and territorial integrity of Ukraine within its internationally recognised borders, extending to its territorial waters.

The UNGA resolution also demands that the Russian Federation immediately, completely and unconditionally withdraw all of its military forces from the territory of Ukraine within its internationally recognised borders.

It demands all parties to allow safe and unfettered passage to destinations outside of Ukraine and to facilitate the rapid, safe and unhindered access to humanitarian assistance for those in need in Ukraine, to protect civilians, including humanitarian personnel and persons in vulnerable situations, including women, older persons, persons with disabilities, indigenous peoples, migrants and children, and to respect human rights.

UN Secretary General Antonio Guterres said that the General Assembly has spoken and as the UN Chief it's "my duty to stand by this resolution and be guided by its call.

The message of the General Assembly is loud and clear: End hostilities in Ukraine now. Silence the guns now. Open the door to dialogue and diplomacy now. The territorial integrity and sovereignty of Ukraine must be respected in line with the UN Charter. We don't have a moment to lose. The brutal effects of the conflict are plain to see.

After the adoption of the resolution, US Ambassador to the UN Linda Thomas-Greenfield said the world has spoken with a clear, united voice. Together, the vast majority of the world has condemned Russia's unprovoked, unjustified, unconscionable war.

"We have deplored Belarus for allowing its territory to be used to facilitate this aggression. We have affirmed Ukraine's sovereignty and territorial integrity. We have demonstrated that Russia is isolated and alone and that the costs will keep rising until Russia relents. We have affirmed the UN Charter, pledged to address the horrific human rights and humanitarian crisis in Ukraine, and stood together in the battle for the soul of the world," she said.

The resolution urges the immediate peaceful resolution of the conflict between Russia and Ukraine through political dialogue, negotiations, mediation and other peaceful means.

It also deplores the February 21 decision by Russia related to the status of certain areas of the Donetsk and Luhansk regions of Ukraine as a violation of the territorial integrity and sovereignty of Ukraine and inconsistent with the principles of the Charter.

It demanded that Russia immediately and unconditionally reverse the decision related to the status of certain areas of the Donetsk and Luhansk regions of Ukraine.