The governing Conservative Party was all but wiped out 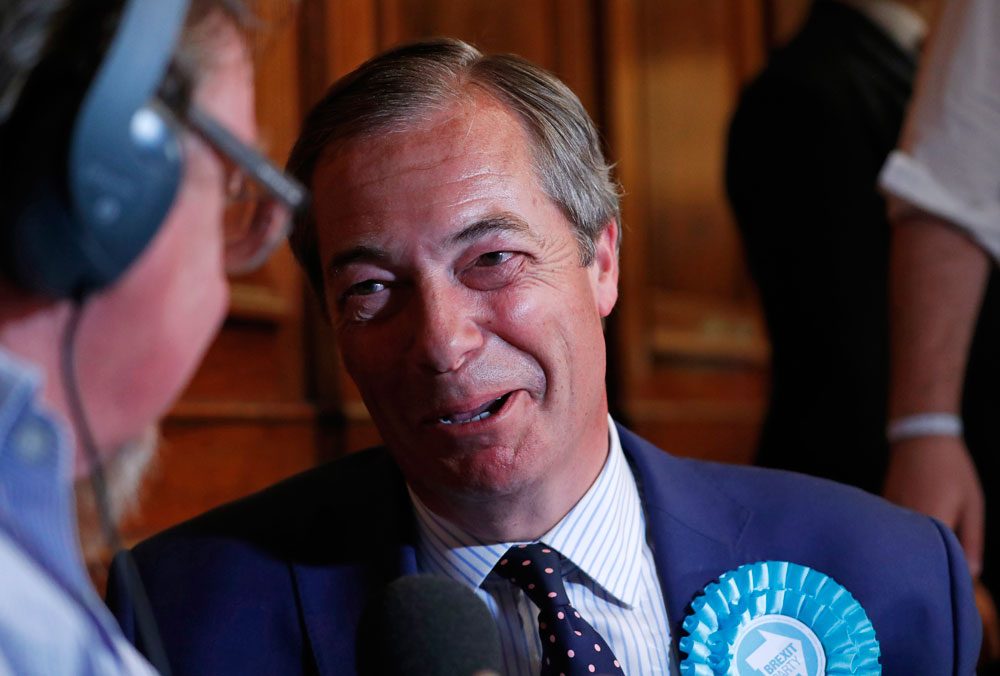 Veteran Euroskeptic Nigel Farage said Britain should get set to leave the European Union without a divorce deal after an election across the bloc saw his Brexit Party and pro-EU forces carve up the votes at the expense of the long-dominant larger parties.

The UK’s governing Conservative Party was all but wiped out in voting for the European Parliament, as pro-Brexit and pro-EU voters both punished it for leading the country into a political impasse and failing to lead it out of the EU.

With results announced on Monday for all of England and Wales, the Brexit Party had won 28 of the 73 British EU seats up for grabs and almost a third of the votes. The pro-EU Liberal Democrats took about 20% of the vote and 15 seats — up from only one at the last EU election in 2014.

Labour came third with 10 seats, followed by the pro-European, environmentalist Greens with seven. The ruling Conservatives — apparently blamed by voters for failing to deliver Brexit in March as planned — were in fifth place with just three EU seats and under 10% of the vote.

The election leaves Britain's EU exit ever more uncertain, with both Brexiteers and pro-EU “remainers” able to claim strong support. Labour and the Conservatives, who in different ways each sought a compromise Brexit, were hammered.

The result raises the likelihood of a chaotic “no deal” exit from the EU — but also of a new referendum that could reverse the decision to leave.

“This is the vote that says: put no-deal Brexit back on the table,” Farage said.

A triumphant Farage said his party would “stun everybody” in the next British general election if the country didn’t leave the EU on the currently scheduled date of October 31.

The election is likely to harden the rhetoric of candidates to succeed Prime Minister Theresa May, who is stepping down as Conservative leader next month after failing to deliver Brexit.

Most businesses and economists think leaving the EU with no agreement on departure terms and future relations would cause economic turmoil and plunge Britain into recession. But many Conservatives think embracing a no-deal Brexit may be the only way to win back voters from Farage’s party.

Boris Johnson, the current favourite to replace May as Britain's next prime minister, tweeted: “The message from last night's results is clear. It is time for us to deliver Brexit and set out our positive plans for the country.”

Another leadership contender, former Brexit secretary Dominic Raab, said: 'Voters have sent us a very clear message: unless we get on and actually leave the EU they will rightly kick us out at the next election.”

Farage’s Brexit Party was one of several nationalist and populist parties making gains across the continent in an election that saw an erosion of support for the traditionally dominant political parties.

The results reflect an electorate deeply divided over Britain's 2016 decision to leave the EU, but united in anger at the two long-dominant parties, the Conservatives and Labour, who have brought the Brexit process to deadlock.

Labour paid for a fence-sitting Brexit policy that saw the party dither over whether to support a new referendum that could halt Brexit.

Some senior Labour figures said after the party's weak performance that it must now take a strong stance in favour of a second referendum on Brexit.

“There should be a (new Brexit) referendum and we should campaign to remain,” said Labour foreign affairs spokeswoman Emily Thornberry.

But party leader Jeremy Corbyn declined to make his position clear. He still said the country needed either a general election or a referendum on Brexit.

“With the Conservatives disintegrating and unable to govern, and parliament deadlocked, this issue will have to go back to the people, whether through a general election or a public vote,” he said.

British politics has been in crisis since electors voted 52%-48% in June 2016 to leave the EU. But its departure, scheduled for March 29, has been delayed because lawmakers have rejected the divorce terms struck between the government and the bloc.

After three defeats for her Brexit deal in Parliament, May threw in the towel on Friday, announcing that she will step down as party leader on June 7.

Britain participated in the EU election because it is still a member of the bloc, but the lawmakers it elects will only sit in the European Parliament until the country leaves the EU.