Lawmakers are due to vote on the agreement on Tuesday, and all signs suggest they will reject it 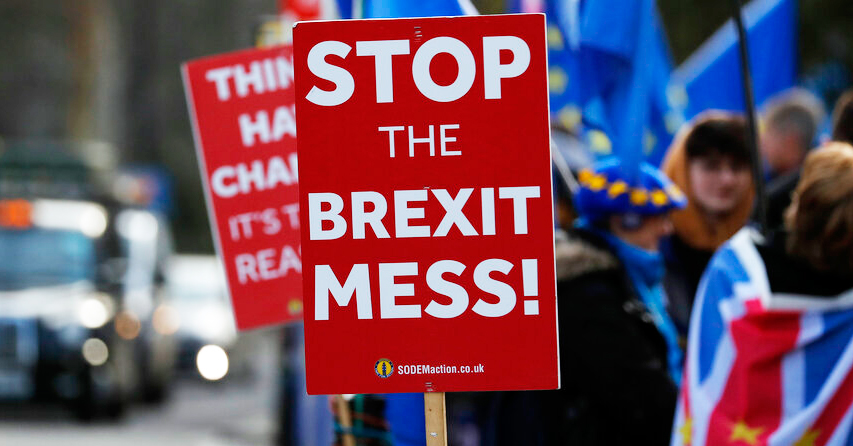 British Prime Minister Theresa May warned Sunday that lawmakers risk undermining the public's faith in democracy if they reject her divorce deal with the European Union in a vote set for Tuesday.

May said some members of Parliament were playing political games with the Brexit debate. Lawmakers, she said, should respect the results of the 2016 referendum in which 52 percent of voters backed leaving the EU.

Failing to do so 'would be a catastrophic and unforgivable breach of trust in our democracy,' she wrote in a commentary published by the Sunday Express. 'So my message to Parliament this weekend is simple: it is time to forget the games and do what is right for our country.'

The government also tried to pressure resistant lawmakers by saying their refusal to fall in line could result in Britain remaining a member of the EU. Brexit Secretary Steve Barclay warned Sunday of the growing risk that Parliament could block Brexit altogether.

The prime minister's office also said it was 'extremely concerned' about reports that some members of Parliament would try to seize control of Brexit negotiations if the agreement May's government reached with the EU is defeated.

The Sunday Times newspaper reported that senior lawmakers intend to try to change the rules of the House of Commons so they can wrest control of the legislative agenda from the government.

The prime minister faces widespread opposition to the existing agreement, primarily because of language designed to prevent the reintroduction of physical border controls between Northern Ireland, which is part of the U.K., and the Republic of Ireland, a member of the EU.

Lawmakers on all sides of the Brexit debate fear the so-called Northern Ireland backstop could leave Britain tied to the EU indefinitely.

May postponed a vote on the deal in mid-December when a resounding defeat was clear. She now is urging Parliament to support it so Britain doesn't leave the EU on March 29 without a deal, which would threaten trade, jobs and economic growth.

While a majority of the 650-seat House of Commons appears to oppose leaving the EU with no deal, there is no agreement on what alternative to pursue.

Straw polls show more than 200 lawmakers back May's deal, while about 100 support a no-deal Brexit and other factions advocate a 'soft Brexit' that keeps Britain close to the EU or a second referendum.

The BBC estimates that May's deal is likely to be supported by about 240 lawmakers, far short of the number needed for passage.

As evidence for the claim that lawmakers might block Brexit, Barclay cited a parliamentary vote last week that will push the government to come up with a Plan B within three working days if May's deal fails. That's much sooner than would have otherwise been the case.

'Uncertainty in terms of what will happen in the House has increased,' Barclay told the BBC. 'So those on the Brexiteer side seeking ideological purity with a deal are risking Brexit, because there is a growing risk that events could unfold in ways that (mean) they are leaving the door ajar to ways that increase the risk to Brexit.'

At the very least, there is a growing chance Parliament may seek to postpone Britain's departure date while politicians work on a new plan.

Michael Roth, a German deputy foreign minister, was quoted Sunday as telling the Frankfurter Allgemeine Sonntagszeitung newspaper that if the British government asked for an extension to Britain's withdrawal date, 'we will treat it very responsibly.'

But he added that it would pose 'quite complicated questions, such as Britain's participation in the European election.'

British opposition leader Jeremy Corbyn said Sunday the Labour Party will seek to force a general election if Parliament rejects May's deal. He suggested that he might force a vote of no-confidence 'soon.' If that effort were successful, Labour would likely also request a delay in the Brexit process.

'Clearly, if a general election takes place and a Labour Party government comes in...there would have to be time for those negotiations,' Corbyn said.