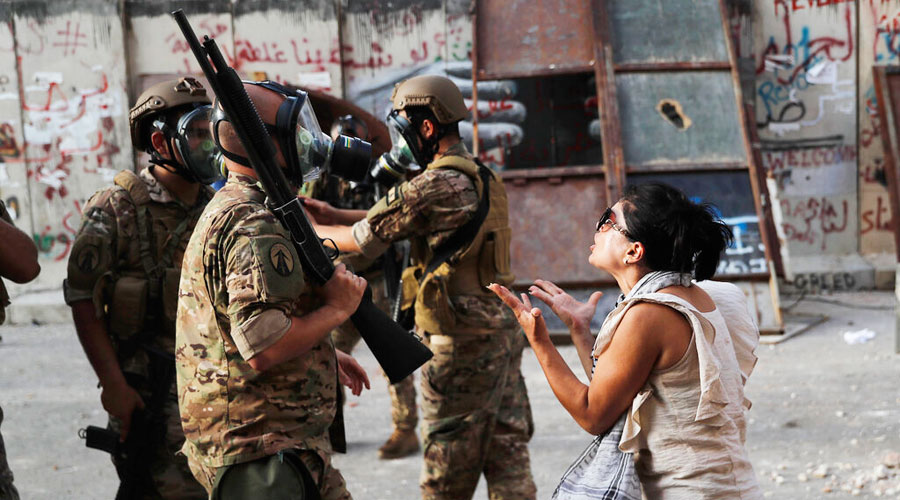 An anti-government protester, reacts in front of Lebanese soldiers during a protest against the political elites and the government, in Beirut, Lebanon, Saturday, August 8, 2020.
AP
Reuters   |   Beirut   |   Published 09.08.20, 01:09 AM

Lebanese protesters stormed government ministries in Beirut and trashed the offices of the Association of Lebanese Banks on Saturday as shots rang out in increasingly angry demonstrations over Tuesday’s devastating explosion.

The protesters said their politicians should resign and be punished for negligence they say led to the blast, the biggest ever to hit Beirut, that killed 158 people and injured more than 6,000, compounding months of political and economic meltdown.

A policeman was killed during the clashes, a spokesman said. A policeman at the scene said the officer died when he fell into an elevator shaft in a nearby building after being chased by protesters.

They chanted “the people want the fall of the regime”, reprising a popular chant from the Arab Spring uprisings of 2011. They held posters saying “Leave, you are all killers”.

The Red Cross said it had treated 117 people for injuries on the scene while another 55 were taken to hospital. Policemen wounded by stones were treated by ambulance workers. A fire broke out in central Martyrs’ Square.

Dozens of protesters broke into the foreign ministry where they burnt a portrait of President Michel Aoun, representative for many of a political class that has ruled Lebanon for decades and that they say is to blame for its current mess.

“We are staying here. We call on the Lebanese people to occupy all the ministries,” a demonstrator said by megaphone.

About 10,000 people gathered in Martyrs’ Square, some throwing stones. Police fired tear gas when some protesters tried to break through the barrier blocking a street leading to parliament.

Police confirmed shots and rubber bullets had been fired. Riot police shot dozens of teargas canisters at protesters, who hit back with firecrackers and stones.

Prime Minister Hassan Diab said the only way out was early parliamentary elections.

The protests were the biggest since October when thousands of people took to the streets in protest against corruption, bad governance and mismanagement.