Former Vice President Amrullah Saleh, one of the leaders of the opposition forces, says his side had not given up 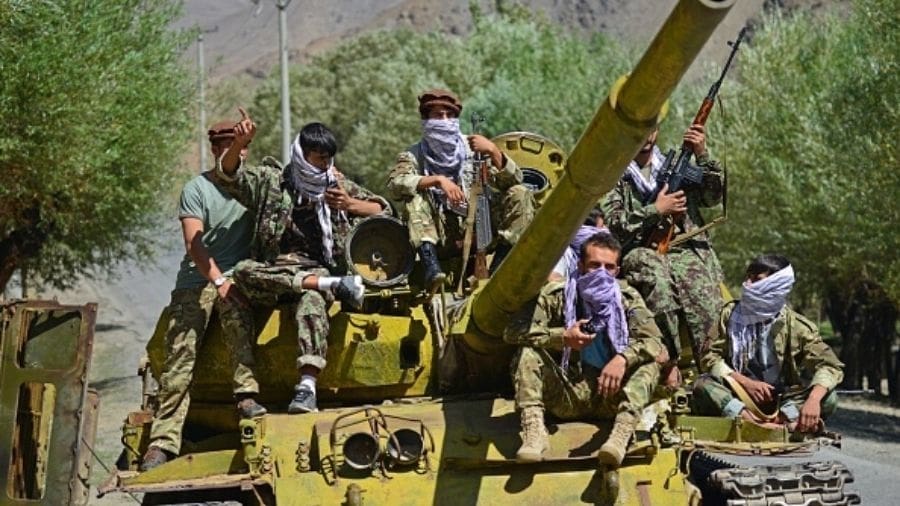 Afghan resistance movement and anti-Taliban uprising forces are pictured on a Soviet-era tank as they are deployed to patrol along a road in the Astana area of Bazarak in Panjshir province
AFP via Getty Images
Reuters   |   Published 04.09.21, 12:16 PM

Three Taliban sources said the Islamist militia had on Friday seized the Panjshir valley north of Kabul, the last province of Afghanistan holding out against it, although a resistance leader denied it had fallen.

"By the grace of Allah Almighty, we are in control of the entire Afghanistan. The troublemakers have been defeated and Panjshir is now under our command," said one Taliban commander.

Deafening volleys of celebratory gunfire resounded all over Kabul and Facebook accounts were full of mentions of the fall of Panjshir.

It was not immediately possible to confirm the reports, which if true would give the Taliban complete control of Afghanistan, something they did not achieve when they first ruled the country between 1996 and 2001.

Former Vice President Amrullah Saleh, one of the leaders of the opposition forces, said his side had not given up.

"There is no doubt we are in a difficult situation. We are under invasion by the Taliban," he said on a video clip posted to Twitter by a BBC World journalist. "We have held the ground, we have resisted."

Several other resistance leaders also dismissed reports of the fall of Panjshir, where thousands of fighters from regional militias and remnants of the old government's forces had massed.

"News of Panjshir conquests is circulating on Pakistani media. This is a lie," said Ahmad Massoud, who is leading the forces.

There had been reports of heavy fighting and casualties in the valley, which is walled off by mountains except for a narrow entrance and had held out against Soviet occupation as well as the previous Taliban government that was ousted in 2001.

Meanwhile, U.S.-trained Afghan pilots who flew 46 military planes out of the country before the Taliban seized Kabul on Aug. 15 questioned when they would be allowed to leave the Uzbekistan camp where they were being held.

"We are kind of like in jail," one pilot told Reuters.

The Taliban seized Kabul on Aug. 15 after rapid advances across Afghanistan.

Its immediate priority may be to avert the collapse of an economy grappling with drought and the ravages of a 20-year conflict that killed around 240,000 Afghans before U.S. forces completed a tumultuous pullout on Aug. 30.

Afghanistan is facing not only humanitarian disaster but also threats to its security from rival jihadist groups, including a local offshoot of Islamic State.

"All the top leaders have arrived in Kabul, where preparations are in final stages to announce the new government," a Taliban official said, speaking on condition of anonymity.

While Taliban officials have spoken of wanting to form a consensus government, a source close to the militants said the interim government would consist solely of Taliban members.

It would comprise 25 ministries, with a consultative council, or shura, of 12 Muslim scholars, the source added.

Also being planned within six to eight months is a loya jirga, or grand assembly, bringing together representatives from across Afghan society to discuss a constitution and the structure of the future government, the source said.

Without the aid that has sustained the country for years, the Taliban will find it hard to avert economic collapse.

Western powers say they are prepared to engage with the Taliban and send humanitarian aid, but that formal recognition of the government and broader economic assistance will depend on action - not just promises - to safeguard human rights.

When they were in power from 1996 to 2001, the Taliban imposed violent punishments and barred women and older girls from school and work.

This time, the group has tried to present a more conciliatory face to the world, promising to protect human rights and avoid vendettas, although it has yet to explain what social rules it will enforce.

The United States, the European Union and others have cast doubt on its assurances.

On Friday, dozens of women protested near the presidential palace, urging the Taliban to respect the rights of women and their significant gains in education and the workforce over the past two decades.

"Our demonstrations are because without the presence of women, no society will prosper," said one protester, Fatema Etemadi.

Footage obtained by Reuters showed most of the women dispersing after an armed Taliban militant intervened.

Afghanistan's 250 female judges are particularly afraid of men they jailed who have now been freed by the Taliban.

"Four or five Taliban members came and asked people in my house: 'Where is this woman judge?' These were people who I had put in jail," a judge who had escaped to Europe said from an undisclosed location, asking not to be identified.