Dullas Alahapperuma is a senior lawmaker and a former journalist 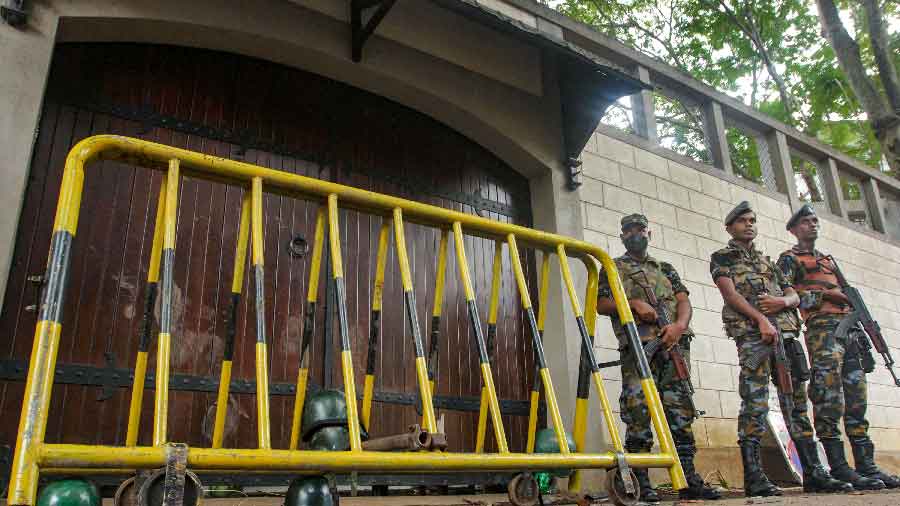 Taking to Twitter, the SLPP leader said, "My gratitude to oppo. Leader @sajithpremadasa for his altruistic act in nominating me, & to @PodujanaParty Chairman Prof. G L Peiris for confirming me as a Presidential candidate. Appreciate all the others for their support & I wish my fellow candidates best for tomorw's election."

Earlier in the day, Samagi Jana Balawegaya (SJB) leader Sajith Premadasa withdrew his candidature for President of the island nation and extended his support to Dullas Alahapperuma for the top post.

Premadasa took to Twitter to say that his party the Samagi Jana Balawegaya and its alliance and opposition partners will support Alahapperuma, an MP of the Sri Lanka Podujana Peramuna (SLPP), who is in the fray for the upcoming presidential elections.

Premadasa said that he is heading with this decision as he seeks the "greater good" for Lankans.

"For the greater good of my country that I love and the people I cherish I hereby withdraw my candidacy for the position of President. Samagi Jana Balawegaya and our alliance and our opposition partners will work hard towards making Dullas Alahapperuma victorious," he said.

Dullas Alahapperuma is a senior lawmaker from the Sri Lanka Podujana Peramuna (SLPP) and a former journalist. He was a Cabinet minister in the previous Rajapaksa government.

Meanwhile, Sri Lanka's main opposition party Samagi Jana Balawegaya (SJB) has said that the party's leader Sajith Premadasa will be appointed as the Prime Minister if SLPP MP Dullas Allahaperuma is elected to the post of President.SJB General-Secretary Ranjith Madduma Bandara said that an agreement had been stuck with SLPP MP Allahaperuma on the same. Bandara claimed that Alahapperuma had sufficient support to be elected as the new President in the 225-member Parliament.

There is a possibility of the formation of a multi-party government if Alahaperuma is elected as the President.SLPP Chairman G L Peiris also extended his support for Premadasa for the PM post. Addressing media at the Parliament complex, Peiris said that it was the wish of the people that the two main parties reach a solution to the current political crisis.

Prime Minister Ranil Wickremesinghe who is now the acting president is among those who are in the race for the post of the President to be held on July 20 in which 225 members of the House are eligible to vote and participate in the secret ballot.SLPP's Allahaperuma and National People's Power (NPP) leader Anura Kumara Dissanayake are the other two.

The parliamentary referendum to elect the President will be held tomorrow, July 20 (Wednesday), thus the Parliament is adjourned till 10.00 am tomorrow.

Sri Lanka's parliament is scheduled to elect a new president on July 20 following the resignation of Gotabaya Rajapaksa, who flew to Singapore via the Maldives, amid a severe economic crisis in the South Asian country.

Former President Gotabaya Rajapaksa had offered his resignation after fleeing the country to Singapore. The president first flew to the Maldives after tens of thousands of protesters stormed his official residence in the capital Colombo.

The economy in Sri Lanka is bracing for a sharp contraction due to the unavailability of basic inputs for production, an 80 per cent depreciation of the currency since March 2022, coupled with a lack of foreign reserves and the country's failure to meet its international debt obligations.

Hundreds of Sri Lankans continue to queue up at petrol pumps across the debt-ridden country every day amid fuel shortage, and a large number of people are ditching their cars and motorcycles for bicycles for their daily commute.

The economic crisis which is the worst in Sri Lanka's history has prompted an acute shortage of essential items like fuel.

Lanka: 3 in fray for President