City in a 'race against time', says health commission official 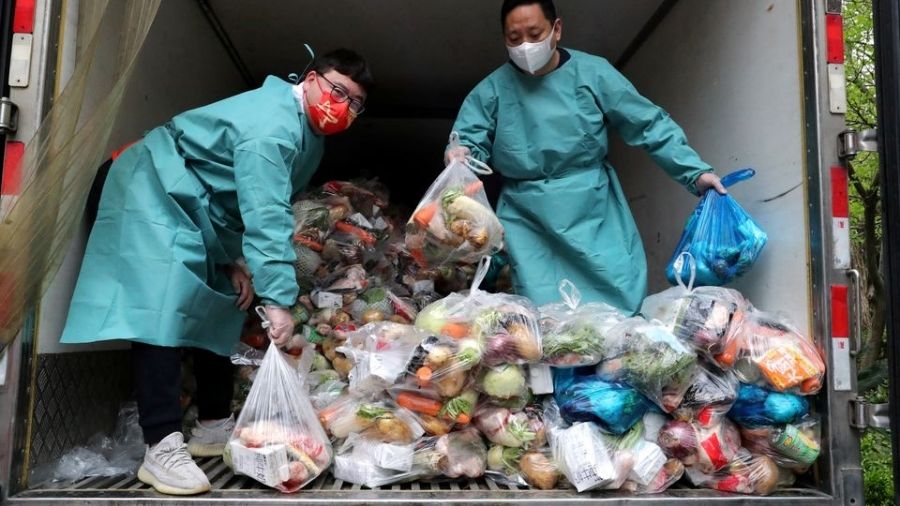 Workers wearing protective gear sort bags of vegetables and groceries on a truck to distribute them to residents at a residential compound, in Shanghai on Tuesday.
Reuters
Reuters   |   Shanghai   |   Published 06.04.22, 10:51 AM

Residents in the major Chinese financial centre of Shanghai, with 26 million under lockdown, scrambled to secure food on Wednesday, with supermarkets shut and deliveries restricted amid another citywide COVID-19 testing programme.

The government of the city, which is in the grips of its biggest-ever COVID-19 outbreak, said on Wednesday it would not consider lifting restrictions until the latest tests were completed and the results evaluated.

Wu Qianyu, an official with the city's health commission, told a briefing on Wednesday that Shanghai was in a "race against time" against the outbreak.

With many compounds already locked down for more than two weeks, residents have grown frustrated with the restrictions, testing requirements and availability of food and other necessities.

Many have called for asymptomatic cases to be allowed to quarantine at home, and policies that separate COVID-positive children from their parents have drawn fire.

Liu Min, vice-head of Shanghai's commerce commission, told reporters at the briefing that authorities were working hard to resolve bottlenecks and take care of the "basic living needs" of the population.

She said efforts would be made to ship food and other necessities to Shanghai from other provinces, and would also build emergency supply stations in and around the city to ensure vegetable supplies. But she said the biggest challenge was getting deliveries to homes.

With official delivery channels either unavailable or severely backlogged, residents have been using whatever method they can - including community WeChat groups - to try for fresh stocks of fruit and vegetables.

Liu said Shanghai would work to "release delivery capacity", saying the 11,000 riders working for major e-commerce platforms in the city could go to work if they submitted daily negative COVID nucleic acid and antigen tests.

Shanghai detected a record 16,766 new asymptomatic coronavirus cases on April 5, up from 13,086 a day earlier. Symptomatic cases also rose to 311 from 268 the day before.

Logistics have been a major challenge for the city government, which had been relatively unscathed by the COVID-19 pandemic.

The government is also expanding quarantine capacity, converting the 150,000-square-metre National Convention and Exhibition Center into a quarantine facility that can hold 40,000 people.

Analysts say the impact of the current restrictions on the economy is mounting, especially for small businesses, with nearly 200 million people across China under some sort of lockdown, according to estimates by Nomura.

Activity in China's services sector shrunk at the steepest pace in two years in March as the local surge in coronavirus cases restricted mobility and weighed on client demand, a private sector survey showed on Wednesday.

The tourism sector is also under pressure. The number of journeys taken over China's three-day Tomb Sweeping Festival holiday tumbled by nearly two-thirds from last year, state media said, and was also lower than 2020, when the country was still recovering from the first outbreak in Wuhan.

Nationwide, there were 1,415 new confirmed coronavirus cases on April 5, up from 1,235 a day earlier, with 1,383 locally transmitted, the National Health Commission said.

The number of new asymptomatic cases, which China counts separately, stood at 19,199 compared with 15,355 a day earlier.