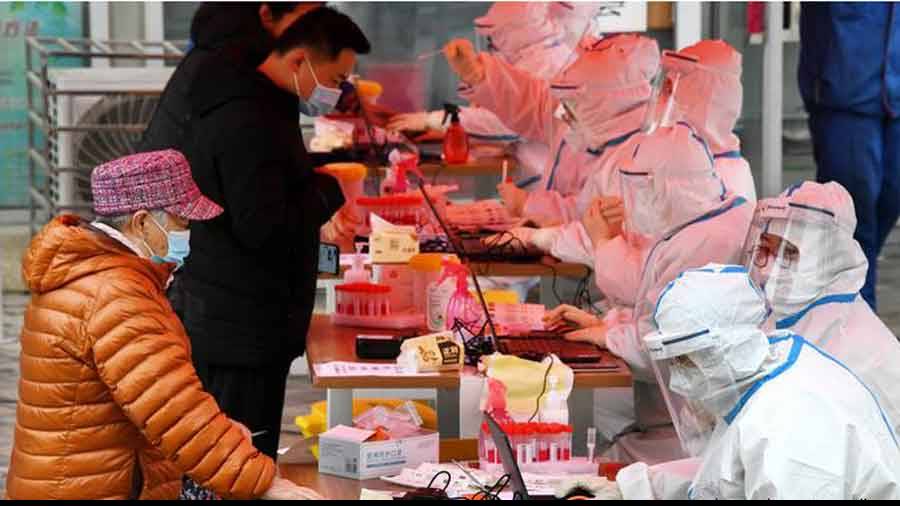 Shanghai has extended the Covid-19 lockdown to April 26, amid reports of growing public resentment as the eastern metropolis of 26 million reported 11 more deaths on Thursday, taking the toll in the current outbreak to 36.

China on Thursday reported 2,119 locally transmitted confirmed Covid-19 cases, of which 1,931 were reported in Shanghai, according to the National Health Commission.

Shanghai has added 17,629 new cases in the previous 24 hours, 4.7 per cent fewer than a day earlier, according to data released on Friday, taking the city's cumulative cases since March 1 to 443,500.

Symptomatic cases fell 26.7 per cent to 1,931, in the biggest one-day decline since the outbreak, Hong Kong-based South China Morning Post reported on Friday.

Also, 30,813 people with confirmed Covid-19 cases were undergoing treatment in hospitals across the country, the commission's report said.

Thursday also saw 11 deaths from Covid-19, all in Shanghai, bringing the mainland's death toll since the coronavirus first emerged in the central Chinese city of Wuhan in December 2019 to 4,674, as per official data.

Meanwhile, Shanghai has extended a standstill order throughout the city till April 26, tightening its stranglehold on a lockdown which is entering its 4th week to track down every Omicron case in one of China's largest centres, the Post report said.

City authorities have extended their static management measures until next Tuesday to plug the loopholes around unguarded compounds, where infections have flared up again after days of remaining dormant.

The standstill order curbs the movements of medical staff, health officials, delivery couriers and community volunteers in those areas, the report said.

The city will start a series of campaigns on Friday to cut off all Covid-19 transmission chains in communities as soon as possible, local authorities said.

Tiered community control measures will be carried out to minimise the movements and gatherings of people, according to the arrangements of the municipal committee of the Communist Party of China and the local government, state-run Xinhua news agency reported.

Other campaigns include carrying out epidemiological investigations, traditional Chinese medicine intervention, as well as cleaning and disinfection, it said.

Additional mass testing will be conducted throughout the city in varying frequencies depending on the risks of infection in each area, as Vice-Premier Sun Chunlan who is currently stationed in the city pushed local authorities to be relentless in tracing, isolating and treating every single case of the virus in China's new Covid-19 epicentre.

Streets and towns where the outbreak remains severe need to be highlighted with strengthened efforts to eradicate the virus there, Sun told local officials on Thursday, the Post reported.

We must accelerate the pace of chasing a societal zero-COVID goal, Sun added.