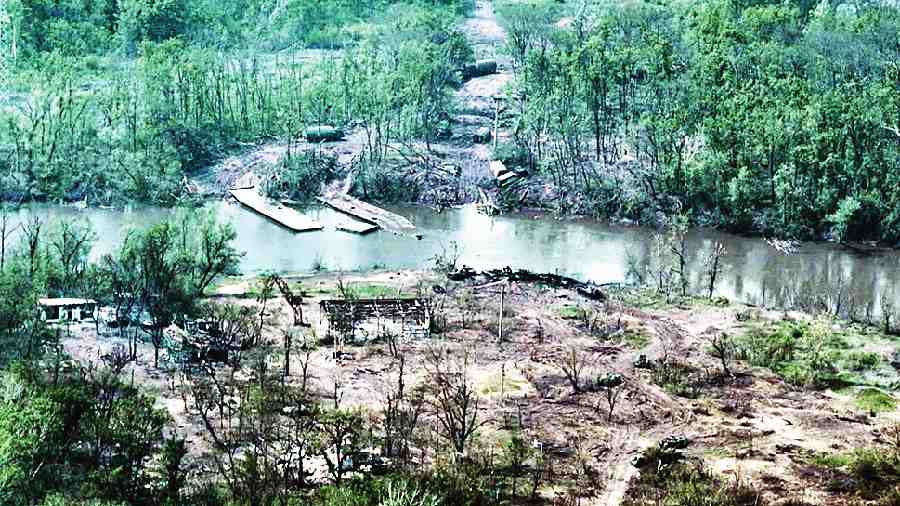 An aerial view of burnt vehicles and the remains of a makeshift bridge across the Siverskyi Donets river, eastern Ukraine.
File picture
Reuters   |   Kyiv   |   Published 21.06.22, 12:42 AM

Russian forces captured territory along a frontline river in eastern Ukraine on Monday.

Moscow’s separatist proxies claimed to have captured Toshkivka, a town on the mostly Ukrainian-held western bank of the Siverskyi Donets river, south of Sievierodonetsk, which has become the main battlefield city in recent weeks.

Ukraine acknowledged that Moscow had success in Toshkivka and said the Russians were trying to gain a foot-hold there to make a breakthrough into the wider, Ukrainian-held pocket of the eastern Donbas region. It also confirmed a Russian claim to have captured Metyolkine on Sievierodonetsk’s eastern outskirts.

Moscow, for its part, threatened to take unspecified action to retaliate against EU member Lithuania for banning transport of basic goods to Kaliningrad, a Russian outpost on the Baltic Sea surrounded by EU territory. The Lithuanian ban, which took effect on Saturday, blocks shipments of coal, metals, construction materials and advanced technology to the outpost.

Lithuania said it was required to enforce the ban under sanctions imposed by the EU.

The Russian-installed leader of Crimea, which Russia annexed from Ukraine in 2014, said Kyiv had struck Black Sea drilling platforms owned by a Crimean oil company.