Vladimir Putin says he won't use nuclear weapons in Ukraine

The Russian President particularly mentioned Liz Truss saying in August that she would be ready to use nuclear weapons if she became UK PM, a remark which he said worried the Kremlin 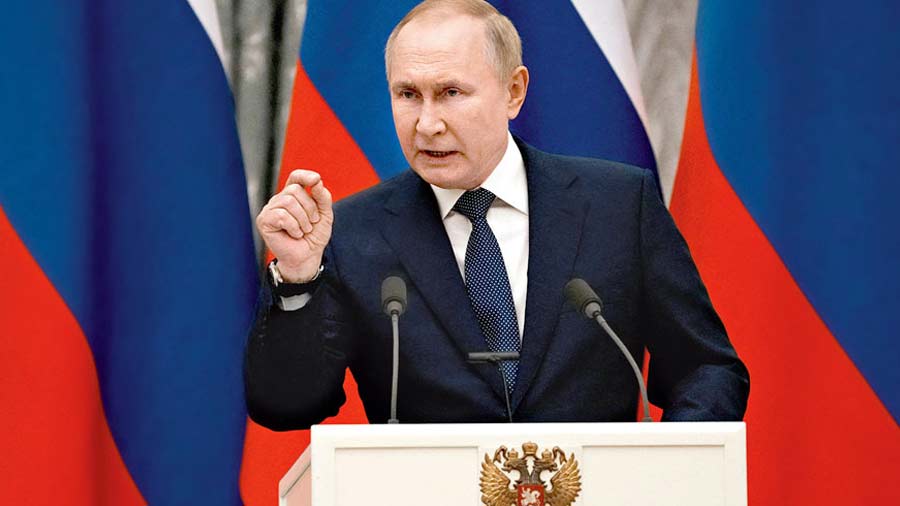 Russian President Vladimir Putin on Thursday denied having any intentions of using nuclear weapons in Ukraine but described the conflict there as part of alleged efforts by the West to secure its global domination, which he insisted are doomed to fail.

Speaking at a conference of international foreign policy experts, Putin said it's pointless for Russia to strike Ukraine with nuclear weapons.

“We see no need for that,” Putin said.

“There is no point in that, neither political, nor military.”

Putin said an earlier warning of his readiness to use “all means available to protect Russia” didn't amount to nuclear sabre-rattling but was merely a response to Western statements about their possible use of nuclear weapons.

He particularly mentioned Liz Truss saying in August that she would be ready to use nuclear weapons if she became Britain's prime minister, a remark which he said worried the Kremlin.

“What were we supposed to think?” Putin said.

“We saw that as a coordinated position, an attempt to blackmail us.”

In a long speech full of diatribes against the United States and its allies, Putin accused them of trying to dictate their terms to other nations in a “dangerous, bloody and dirty” domination game.

Putin, who sent his troops into Ukraine on Feb. 24, has cast Western support for Ukraine as part of broad efforts by Washington and its allies to enforce its will upon others through a rules-based world order.

He argued that the world has reached a turning point, when “the West is no longer able to dictate its will to humankind but still tries to do it, and the majority of nations no longer want to tolerate it.”

The Russian leader claimed that the Western policies will foment more chaos, adding that “he who sows the wind will reap the whirlwind.”

Putin claimed that “humankind now faces a choice: accumulate a load of problems that will inevitably crush us all or try to find solutions that may not be ideal but could work and could make the world more stable and secure.”

Without offering evidence, the Russian leader repeated Moscow's unproven allegation that Ukraine was plotting a false flag attack involving a radioactive dirty bomb it would try to pin on Russia.

Ukraine has strongly rejected the claim, and its Western allies have dismissed it as “transparently false.” Ukraine argued Russia might be making the unfounded allegation to serve as a cover for its own possible plot to detonate a dirty bomb.

U.S. Defence Secretary Lloyd Austin told reporters on Thursday that the U.S. has still not seen anything to indicate that Putin has decided to use a dirty bomb.

Putin said he personally ordered Russian Defense Minister Sergei Shoigu to call his foreign counterparts to tell them about the purported plot.

He maintained that Russia knows the Ukrainian facilities working on the project.

He mocked the allegations by Ukraine and the West that Russia was firing on the territory of the Zaporizhzhia Nuclear Power Plant in southern Ukraine as “ravings.” Russian troops have occupied the plant, Europe's largest, since the early days of the conflict.

Putin also expressed bewilderment about Washington's policy on China, noting that tensions sparked by a recent visit to Taiwan by U.S. House Speaker Nancy Pelosi come amid the U.S.-Russian showdown over Ukraine.

“Why spoil relations with China at the same time?” Putin said.

“It seems to defy logic and common sense. It looks like ravings.”

He hailed Russia's relations with China, but said he hadn't warned Chinese President Xi Jinping about his intention to send troops into Ukraine when he visited Beijing days before that to attend the 2022 Winter Olympics.

Asked about Washinton's threat to re-evaluate its relationship with Saudi Arabia over the Riyadh-led OPEC+ alliance's move to cut oil production, Putin argued that Saudi Crown Prince Mohammed bin Salman was acting in his nation's interests and the need to stabilise global energy markets.

The Russian leader said Russia isn't the enemy of the West but will continue to oppose the purported diktat of Western neo-liberal elites, accusing them of trying to subdue Russia.

“Their goal is to make Russia more vulnerable and turn it into an instrument for fulfilling their geopolitical tasks, they have failed to achieve it and they will never succeed,” Putin said.

Putin reaffirmed his long-held claim that Russians and Ukrainians are part of a single people and again denigrated Ukraine as an “artificial state” that received historic Russian lands from Communist rulers during the Soviet times.In that context, he acknowledged that the fighting in Ukraine effectively amounts to a civil war, although the Kremlin calls its actions in Ukraine a “special military operation.”

Putin said he thinks “all the time” about the casualties that Russia has suffered in Ukraine, but insisted that NATO's refusal to rule out Ukraine's prospective membership and Kyiv's refusal to adhere to a peace deal for its separatist conflict in the country's east has left Moscow no other choice.

He denied underestimating Ukraine's ability to fight back and insisted that his “special military operation” has proceeded as planned.

Putin also acknowledged the challenges posed by Western sanctions, but argued that Russia has proven resilient to foreign pressure and has become more united.

John Kirby, a U.S. National Security Council spokesman, responded to Putin's speech as it was underway.

Russia claim of 'dirty bombs' to be probed