Russia’s economy is reeling and Putin alone is to blame, says US President 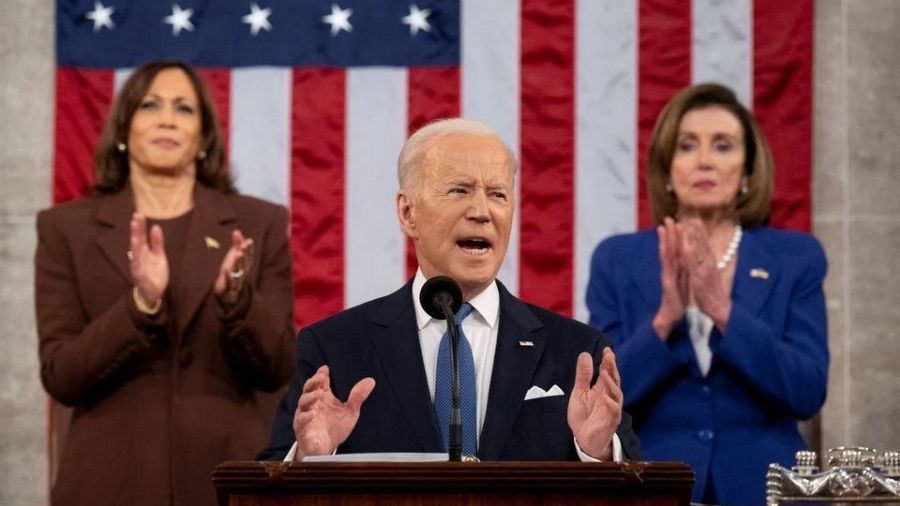 U.S. President Joe Biden led a standing ovation for the embattled Ukrainian people on Tuesday in a State of the Union speech that he rewrote to assail Russian President Vladimir Putin for what he called his "unprovoked and premeditated invasion" of Ukraine.

"Let each of us if you're able to stand, stand and send an unmistakable signal to Ukraine and to the world," Biden said.

Often polarized along partisan lines, Democrats and Republicans rose to applaud their support for Ukraine, many waving Ukrainian flags and cheering in the chamber of the House of Representatives at Biden's first formal State of the Union speech.

"Throughout our history we've learned this lesson when dictators do not pay a price for their aggression, they cause more chaos. They keep moving. And, the costs and threats to America and the world keep rising," Biden said addressing the joint session of the Congress in his first State of the Union.

In a deviation from his prepared remarks, Biden said of Putin: "He has no idea what's coming."

Biden was looking to reset his presidency after a first year in office marked by rapid economic growth and trillions of dollars in new programs, but beset by the highest inflation in 40 years and a lingering coronavirus pandemic.

The annual speech to Congress gave Biden a platform to highlight his agenda, reassure fretful Americans and seek to boost his sluggish poll numbers amid dire warnings his fellow Democrats could face losses in November congressional elections.

For the first time in months, members of Congress were not required to wear masks in the chambers to guard against the pandemic, a sight that could provide helpful optics for the president.

Ahead of Biden's arrival, the Ukrainian flags were passed out in the House chamber, the venue for his speech. Several women members of Congress arrived wearing the flag's colors of yellow and blue.

Biden's challenge was to show Americans he is on top of the West's response to the most tense period in relations with Russia since the Cold War ended 30 years ago.

Russia's invasion of Ukraine has tested Biden's ability to respond rapidly to events without sending American forces into battle.

The United States and its allies have launched withering sanctions against Russia's economy and financial system, Putin himself and his inner circle of oligarchs. More sanctions are being planned.

The crisis forced Biden, whose chaotic withdrawal from Afghanistan last year drew wide criticism, to reshape the speech to focus on uniting Americans around a global effort to punish Moscow and support Kyiv.

He launched heavy criticism of Putin in his remarks, saying the Russian leader had badly miscalculated how events would unfold and that now "Russia’s economy is reeling and Putin alone is to blame."

"He thought he could roll into Ukraine and the world would roll over. Instead he met a wall of strength he never imagined. He met the Ukrainian people," he said. "From President Zelenskiy to every Ukrainian, their fearlessness, their courage, their determination, inspires the world."

"Putin's war was premeditated and unprovoked. He rejected efforts at diplomacy. He thought the West and NATO wouldn't respond. And, he thought he could divide us here at home," Biden will say. "Putin was wrong. We were ready."

Biden announced the United States will join other nations in banning Russian flights from American airspace.

In a show of support for Ukraine, first lady Jill Biden had as her guest at the speech the Ukraine ambassador to the United States, Oksana Markarova, who traveled in the Biden motorcade from the White House to Capitol Hill.

Battling rising inflation exacerbated by the Russian crisis and assailed by Republicans who accused him of allowing it to get out of control, Biden called for companies to make more cars and semiconductors in the United States so Americans would be less reliant on imports.

Biden had some progress to tout: The economy grew faster than it has since 1984 with 6.6 million jobs created, the government distributed hundreds of millions of COVID-19 vaccines, and he has nominated the first Black woman to serve on the Supreme Court, Ketanji Brown Jackson.

Biden and his fellow Democrats face the prospect of losing control of the U.S. House of Representatives and Senate in Nov. 8 midterm elections. An uptick in Biden's approval ratings might help prevent that and strengthen his chances of making good on his agenda.

Public opinion polls have shown Biden out of favor with the majority of Americans for months.

Americans' approval of Biden's response to the Russian invasion rose over the past week, with 43% saying they approve in a Reuters/Ipsos poll completed on Tuesday, up from 34% last week. Some 47% disapproved of Biden response's to the crisis, however, and his overall popularity has held near the low point of his presidency in recent weeks.

Even with the jobless rate at 4%, most voters remain pessimistic about the economy, largely due to skyrocketing consumer prices. A quarter of Democrats think the party has failed to take advantage of its rare control of the White House and both houses of Congress.

Iowa Governor Kim Reynolds, who will deliver the Republican response to Biden's speech, will knock his handling of the Ukraine crisis and the U.S. inflation spike.

"Instead of moving America forward, it feels like President Biden and his party have sent us back in time to the late ‘70s and early ‘80s. When runaway inflation was hammering families, a violent crime wave was crashing on our cities, and the Soviet army was trying to redraw the world map," she will say, according to excerpts.

Republicans say the country has not moved quickly enough to ease coronavirus pandemic restrictions as case counts fall. More than 2,000 Americans are dying daily of COVID-19, the latest 7-day average shows, the most of any country in the world.

Authorities reinstalled fencing around the Capitol ahead of planned trucker protests against pandemic-related restrictions, but it did not appear that the convoys would cause major disruptions.