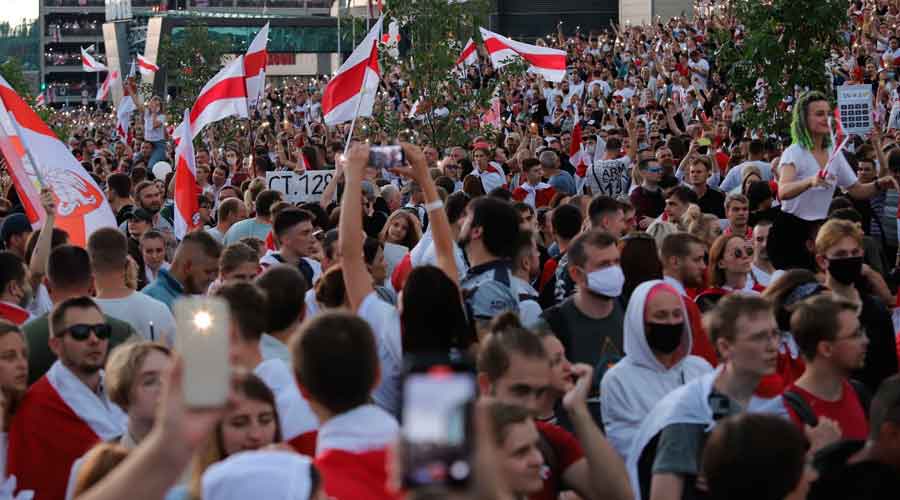 Tens of thousands of Belarusians chanting “Happy Birthday, you rat” and flying red-and-white opposition flags gathered near President Alexander Lukashenko’s residence on Sunday as protesters kept up pressure on the veteran leader to resign.

Lukashenko, who turned 66 on Sunday, is struggling to contain weeks of protests and strikes since winning an August 9 election his opponents say was rigged. He denies electoral fraud.

Russian President Vladimir Putin used a birthday phone call to invite Lukashenko to visit Moscow, a sign of the Kremlin’s willingness to back Lukashenko as he grapples with the unrest and the threat of new western sanctions.

In the biggest sign yet of Russia’s willingness to intervene to prop up Lukashenko, Putin said on Thursday the Kremlin had set up a “reserve police force” at Lukashenko’s request, although it would be deployed only if necessary.

“It was agreed to hold a meeting in Moscow in the coming weeks,” the Kremlin said in a statement after the leaders’ call on Sunday.

Protesters streamed into central Minsk, carrying balloons, flowers and flags, in the afternoon. Belarus had a white-red-white flag for a brief period in the early 1990s and it has become a symbol of its anti-government protests.

Passing cars honked their horns in solidarity. Some women lay down in protest in front of a cordon of helmeted security forces.