Both leaders also exchanged views on contemporary global and regional developments, says Ministry of External Affairs in a statement 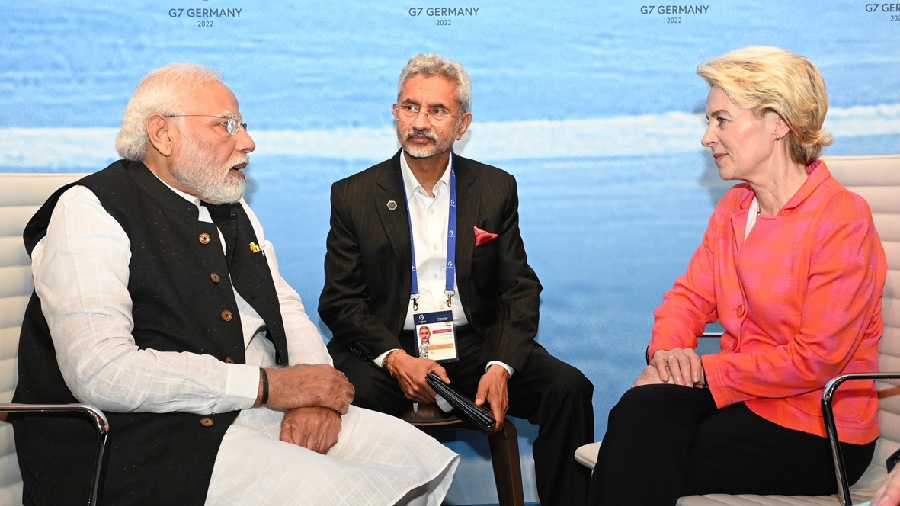 Prime Minister Modi, who is in Germany on a two-day visit from Sunday for the summit of the G7, met von der Leyen on the sidelines of the G7 Summit at Schloss Elmau, the picturesque venue of the summit in southern Germany.

He said that he had an "outstanding meeting" with the European Commission President.

PM @narendramodi and President of @EU_Commission @vonderleyen held talks on the sidelines of the G-7 Summit. Issues such as stronger trade ties, cooperation to mitigate climate change, emerging technologies and cultural linkages were discussed during the meeting, the Prime Minister's Office tweeted.

During their talks, Prime Minister Modi and the EU Commission President welcomed the resumption of negotiations on the trade, investment and geographical indication agreements, Ministry of External Affairs Spokesperson Arindam Bagchi said.

PM @narendramodi meets with the President of @EU_Commission @vonderleyen. The #IndiaEU relationship is shaped by ever-growing bilateral cooperation and partnership, the Official Account of India's Public Diplomacy, Ministry of External Affairs (MEA) said on Twitter.

This was their second meeting in two months after she visited New Delhi in April, her first visit to India as the president of the European Commission.

"The Prime Minister recalled President Leyen's productive visit to Delhi in April 2022 during the Raisina Dialogue. The leaders expressed happiness on the resumption of negotiations on the Trade, Investment and GI Agreements between India and EU. They reviewed India-EU engagements in various sectors, including digital cooperation, climate action and technology & innovation," the Ministry of External Affairs said in a statement.

"Both leaders also exchanged views on contemporary global and regional developments," it added.

In April, Prime Minister Modi and von der Leyen announced the setting up of an India-EU Trade and Technology Council, a high-level strategic mechanism to tackle key trade, economic and technological challenges.

In their talks, both sides also agreed to launch the India-EU Trade and Technology Council (TTC), a strategic coordination mechanism to tackle challenges at the nexus of trade, trusted technology and security.

India and the European Union are eyeing to firm up the comprehensive trade and investment agreements before the commencement of the electoral cycles on both sides in 2024, EU Ambassador to India Ugo Astuto said on April 29.

India is the second country after the US to have such a mechanism with the 27-nation European Union.

In May last year, India and the European Union (EU) announced to resume negotiations for a balanced and comprehensive trade agreement after a gap of over eight years.

The EU said there are 4,500 European companies operating in India, contributing to the creation of over 1.5 million direct and 5 million indirect jobs in the country.

The Investment Facilitation Mechanism was established in 2017 to facilitate the entry for EU companies proposing to invest in India.