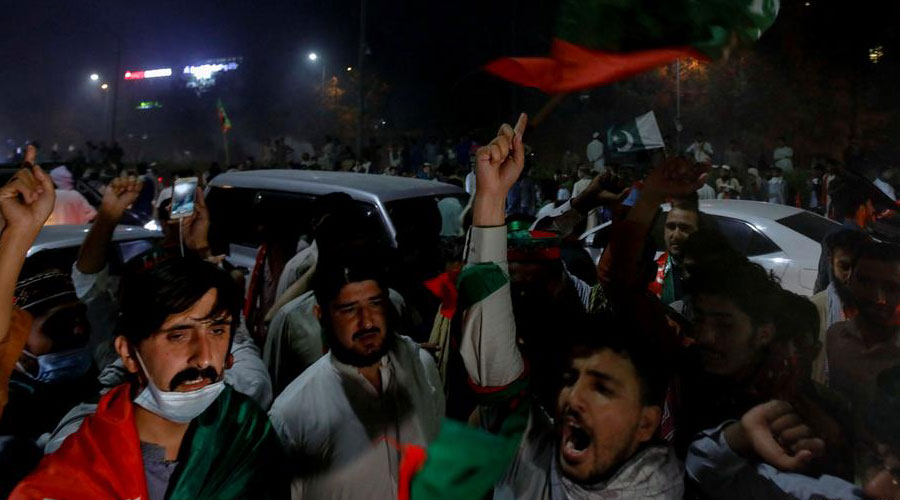 Supporters of Khan's Pakistan Tehreek-e-Insaf (PTI) party were on the streets of Islamabad into the early hours of Thursday morning
Deutsche Welle
Deutsche Welle   |   Published 26.05.22, 09:58 AM

Thousands of supporters of ousted Prime Minister Imran Khan arrived in Islamabad after the Supreme Court allowed a major rally that the government had tried to ban.

Pakistani Interior Minister Rana Sanaullah on Thursday said the government authorized the deployment of army troops in the capital, Islamabad.

It came as thousands of supporters of Pakistan's former Prime Minister Imran Khan arrived in Islamabad, according to local media, for a major rally and were expected to march on parliament.

Sanaullah said troops would protect buildings such as the Supreme Court, the parliament, the prime minister's house and the presidency.

On Wednesday, police fired tear gas and scuffled with stone-throwing protesters who sought to march to the parliament.

Authorities had also blocked all major roads ahead of Wednesday's rallies, while Khan called on his supporters to circumvent any blockades.

The measures were announced following the killing of a policeman on Tuesday during a raid on the home of a key Khan supporter.

The government had attempted to shut down the planned march, but the Supreme Court gave it the green light later on Wednesday.

However, the court only allowed the rally to go ahead at a specifically allocated public grounds. It also ordered that protesters disperse after an address by Khan.

His lawyer was also asked to ensure that the protest remain peaceful.

Khan, who was removed from office after a no-confidence vote in April, had called for the protests. The defiant former prime minister is seeking the toppling of the current government and calling for early elections.

The former cricket star turned Islamist politician had claimed his ouster, and the subsequent installment of his successor, Shahbaz Sharif, was part of a plot organized by Washington. The US denied the allegation.