The arrival of fire season in the American West always brings fear of fatalities, especially among the elderly and infirm, unable to escape the flames 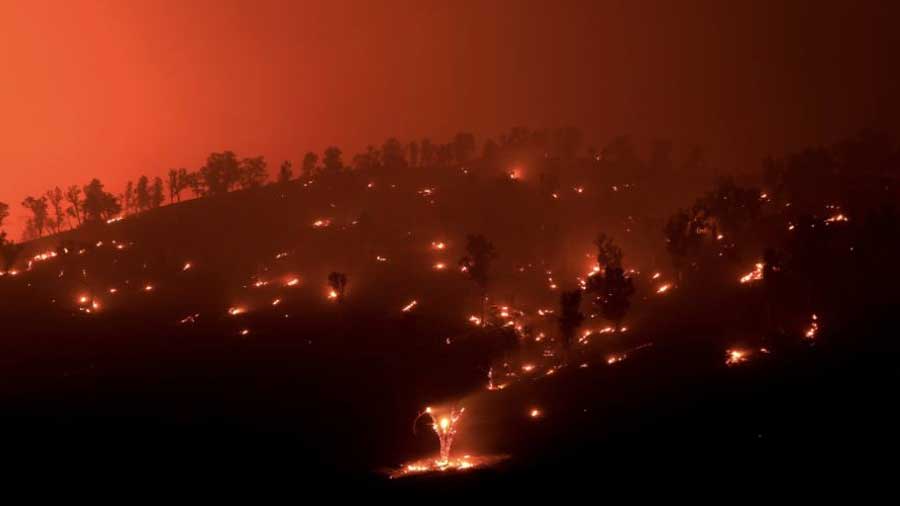 The deaths of Josiah and Wyatt, two athletic teenagers, speak to the speed and the ferocity of the fires that this year have burned a record number of acres, four million in California and Oregon combined.
AP FILE: Representational
Thomas Fuller, Giulia McDonnell Nieto Del Rio   |   San Francisco   |   Published 14.09.20, 01:36 AM

They lived more than 800km from each other — one in the wooded foothills of the Sierra Nevada, northeast of California’s capital Sacramento, the other in a thickly forested canyon east of Oregon’s capital Salem.
Josiah Williams, 16.
Wyatt Tofte, 13.

They were young lives cut short, victims of the great western wildfires of 2020.

The arrival of fire season in the American West always brings fear of fatalities, especially among the elderly and infirm, unable to escape the flames. But the deaths of Josiah and Wyatt, two athletic teenagers, speak to the speed and the ferocity of the fires that this year have burned a record number of acres, four million in California and Oregon combined.

In Scio, Oregon, the logging and farming town in the Willamette Valley where Wyatt Tofte went to middle school, a teacher and school administrator went door to door to Wyatt’s classmates on Friday to check on them. The start of school, which will be held remotely, has been delayed by the fires.

In a community like Scio with a population of around 1,000 people and one blinking traffic signal, children grow up together and know one another well. “The realisation will hit the kids when they have to physically go back to school, and he’s not there anymore,” said Margot Cooper, whose daughter was Wyatt’s classmate.

Wyatt loved football and video games, was exceedingly polite and did a great imitation of the alien dog character, Stitch, from the Disney movie Lilo and Stitch, his friends said. He was surrounded by animals at home and was inseparable from Duke, his giant bull mastiff.

Josiah, nicknamed “Jojo” by family and friends, was described as a caring teenager who was quick to smile. Josiah, who loved living in the mountains — and was fond of riding horses and playing video games — was a “great lovable sweet” son, his mother Jessica Williams said.

The fires that claimed Josiah and Wyatt both flared suddenly and unexpectedly.

The Bear Fire, which had been burning northeast of Sacramento at a moderate pace for days, exploded. Propelled by winds as strong as 70km an hour, it burned 230,000 acres in the span of a night. Most Berry Creek residents evacuated the town in a panic, a narrow country road the only route to safety. Josiah was missing.

On social media, his mother, Jessica, pleaded for the public to help authorities find him. “Please everyone my son is missing and not to be found so please dear God help my family and find my son,” Jessica wrote on Facebook.

Josiah’s father and brother had left the area, but he seemed to have stayed behind and was last seen on Bean Creek Road near the town, his mother wrote. Josiah’s father had driven away from the home to check on family, and Josiah and his older brother had planned to leave the house in their separate cars.

Josiah’s father said that he soon realised that his sons hadn’t made the evacuation, so he tried to return to the house only to find the roads were blocked. Josiah’s brother, Jason, was soon found. But Josiah was not. On Thursday, the sheriff told the family that they had found Josiah’s remains. “I’m so sorry son I wasn’t there to protect you,” Josiah’s mother said in a Facebook post. “I love you so much and miss you.”

In the evergreen forests southeast of Salem, the situation was equally chaotic.

On Monday evening, Kevin Cameron, a Marion county commissioner, awoke to the sounds of sirens in his neighbourhood. The Beachie Creek Fire, which had been burning nearby since mid-August, swept down the canyon that runs along the Santiam river.

The Tofte family lived in a home in the canyon, three generations on the same property. According to a devastating account in The Salem Statesman Journal, Wyatt’s mother fled the fire on foot, her clothes burned off. She is now in a Portland hospital with severe burns.

Wyatt’s father led a desperate search for his son, a mission that would end with the discovery of Wyatt’s remains on the family property in the driver’s seat of a car.

The remains of his grandmother, Peggy Mosso, 71, were also found in the vehicle, as were those of Duke, according to the Marion county sheriff. Mosso had recently fallen and broken her leg; Wyatt, it appears, was trying to drive her to safety.

“All the moms we’ve been talking,” said Cooper. “All of these kids are our kids,” she said, her voice trembling. “It’s hard.”