North Korea fires 2 projectiles after offering talks with US 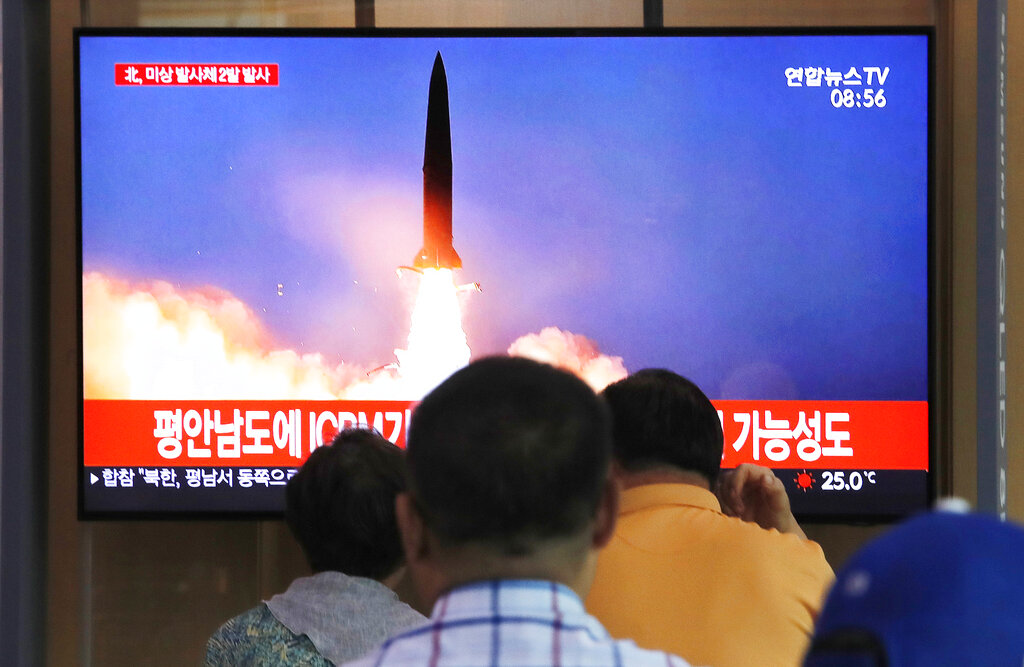 North Korea launched two projectiles towards the sea on Tuesday, South Korea's military said, hours after the North offered to resume nuclear diplomacy with the United States but warned its dealings with Washington may end without new U.S. proposals.

The launches and demand for new proposals were apparently aimed at pressuring the United States to make concessions when the North Korea-U.S. talks restart. North Korea is widely believed to want the United States to provide security guarantees and extensive relief from U.S.-led sanctions in return for limited denuclearisation steps.

The North Korean projectiles fired from its South Phyongan province, which surrounds its capital city of Pyongyang, flew about 330 kilometers across the country and in the direction of the waters off its east coast, according to South Korea's joint chiefs of staff and defense ministry.

Tuesday's launches were the eighth round of launches since late July and the first since August 24. The previous seven launches have revealed short-range missile and rocket artillery systems that experts say would potentially expand its capabilities to strike targets throughout South Korea, including U.S. military bases.

On Monday night, the North's first vice foreign minister, Choe Son Hui, said North Korea is willing to resume nuclear diplomacy in late September but that Washington must come to the negotiating table with acceptable new proposals. She said if the proposals don't satisfy North Korea, dealings between the two countries may end.

'We'll see what happens,' Trump said. 'In the meantime, we have our hostages back, we're getting the remains of our great heroes back and we've had no nuclear testing for a long time.'

The White House said it was aware of the new reports of projectiles being launched from North Korea and was continuing to monitor the situation and consulting with its allies in the region.

Japan's defense ministry said the projectiles did not land in Japan's territorial waters or its exclusive economic zone and there was no indication the launches posed a direct threat to Japan's security.

'We believe North Korea is upgrading its (missile) technology by repeatedly firing missiles,' said Japanese defense minister Takeshi Iwaya. 'We consider this a serious problem and will continue to monitor the development, while ensuring the functioning of warning and surveillance activity.'

In the late-night statement carried by the state media, Choe said North Korea is willing to sit down with the United States 'for comprehensive discussions in late September of the issues we have so far taken up, at a time and place to be agreed.'

Choe said she hopes the United States will bring 'a proposal geared to the interests of the DPRK and the U.S. and based on decision methods acceptable to us.' DPRK stands for the Democratic People's Republic of Korea, the North's official name.

She warned that 'if the U.S. side fingers again the worn-out scenario which has nothing to do with new decision methods at the DPRK-U.S. working negotiation to be held with so much effort, the DPRK-U.S. dealings may come to an end.'

Kim Dong-yub, an analyst at Seoul's Institute for Far Eastern Studies, said the North likely tested one of the new weapons systems it demonstrated in July and August. They include a mobile short-range ballistic missile system that experts say resembled an enlarged version of the U.S. Army Tactical Missile System and a 'super-large' multiple rocket system the North tested on August 24.

The analyst said the North was apparently trying to increase its bargaining power by pairing its dialogue offer with short-range launches, sending a message to Trump that it could potentially test bigger weapons if the United States refuses to make major concessions.

It was a huge embarrassment for the young North Korean leader, who made a day-long train trip to the Vietnamese capital to obtain the sanctions relief he needs to revitalize his country's troubled economy.

In April, Kim said he was open to another summit with Trump but set the end of the year as a deadline for the U.S. to offer improved terms for an agreement to revive the nuclear diplomacy.

Kim and Trump met again at the Korean border in late June and agreed to restart diplomacy, but there have no public meetings between the sides since then.