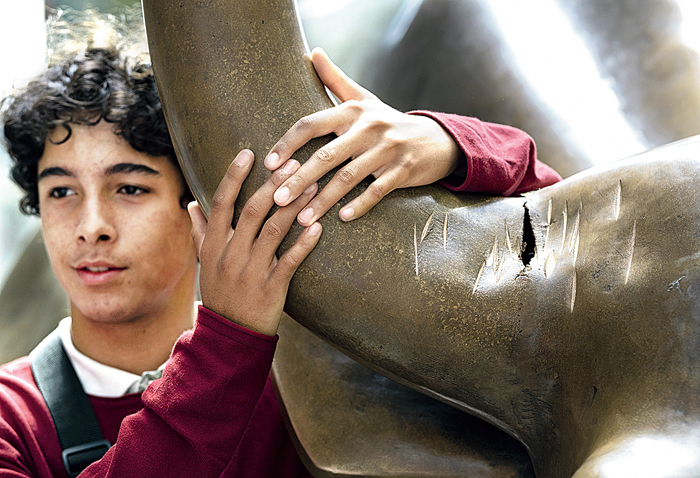 The piercing noise of metal striking metal echoed through Wall Street just after noon on Saturday: A man was battering the bronze, 7,000-pound Charging Bull statue with a makeshift metal banjo.

“He just started wilding out, hitting the bull over the head,” a witness, Luis Cruz, 53, said on Sunday. “And every time he would bang it, he would say the same thing over and over.” Cruz said the man was cursing President Trump as he swung the banjo. The police said he was screaming and ranting about God.

The attack left a gash on the bull’s right horn that was about six inches long and 3/4 of an inch wide — and quickly became a mini tourist attraction.

As visitors gathered around the bull on Sunday morning, a guide from a passing double-decker tour bus directed attention to the sculpture. “That’s the gash,” he said. “See, that’s the gash.”

Police arrested a Dallas man soon after the vandalism. Tevon Varlack, 42, was charged with criminal mischief and disorderly conduct and released. He had no comment when reached by phone.

The incident startled visitors to the Lower Manhattan landmark that has stood on Broadway near Bowling Green since December 1989, when the sculptor Arturo Di Modica installed the bull in lower Manhattan as a work of guerrilla art. At the time Modica declared the sculpture a Yuletide symbol of the “strength and power of the American people”.

Modica, who paid for the original sculpture, could not be reached for comment on Sunday. Fernando Luis Alvarez, who manages a gallery that works with Di Modica, said he planned to drive to New York City to inspect the damage. He estimated it could cost between $75,000 and $150,000 to repair the sculpture. “I’m a little shaken by this,” he said.

Cruz said he saw a man, who was dressed in a baseball cap, T-shirt and jeans, hanging around near the sculpture for about 10 minutes before moving toward it.

The weapon was made of metal with sharp edges and resembled a makeshift banjo, according to the police. It left behind about a dozen deep scratches in addition to the gash. Witnesses said the bull was struck dozens of times, and the sound of the battering was deafening.

Some people scattered. Others seemed to think it was a performance.

“While he was hitting the bull, they were trying to take pictures,” Cruz said. “I said, ‘What are you doing? What if this guy turns on you, hits you over the head, kills you?’ They didn’t pay no mind.”