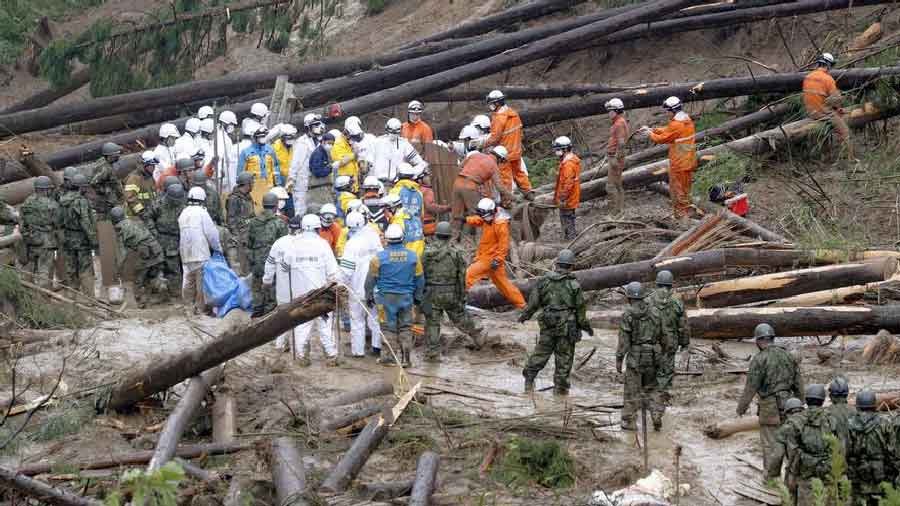 Japanese authorities confirmed the deaths of two people on Tuesday, with two others said to have been found "without vital signs" after Typhoon Nanmadol battered Japan over the weekend.

The storm that made landfall on the country's main southern island of Kyushu on Sunday night, was downgraded to an extratropical cyclone on Tuesday as it made its way off Japan's northeastern coast and headed into the Pacific Ocean.

At least 114 people were injured — 14 of them severely — according to government spokesman Hirozaku Matsuno.

He added that the authorities were also searching for one person reported to be missing.

Where was the worst damage?

In Japan's southern Miyazaki prefecture — where the two deaths were confirmed— the storm system dumped a month's worth of rain in 24 hours while uprooting trees and shattering windows.

A wall was damaged at a Japan Aerospace and Exploration Agency's space center on the island of Tanegashima, located south of Kyushu island, Japan's Economy and Industry Ministry said on Tuesday.

The building is used for rocket assembly and the extent of damage was being determined.

Homes without power, most transportation restored

Some 140,000 homes — mostly in Kyushu — were still without power on Tuesday morning.

Most transportation, including bullet trains and ground commute, was resumed as people returned to work following a three-day weekend.

However, dozens of flights were grounded in Japan's northeast.

Japan is currently in its typhoon season with Nanmadol being its 14th storm system.

The country witnesses around 20 such storms a year but scientists have warned that climate change is augmenting the severity of storms, resulting in extreme weather conditions such as flash floods, heat waves and droughts, becoming more frequent and intense.

In 2019, Typhoon Hagibis caused over 100 casualties while a year earlier, nearly 200 people died in western Japan during the annual rainy season.