Flooding looms for Carolinas after Florence

Florence has killed 23 people, even if rain-weary residents got a brief glimpse of sunshine on Monday 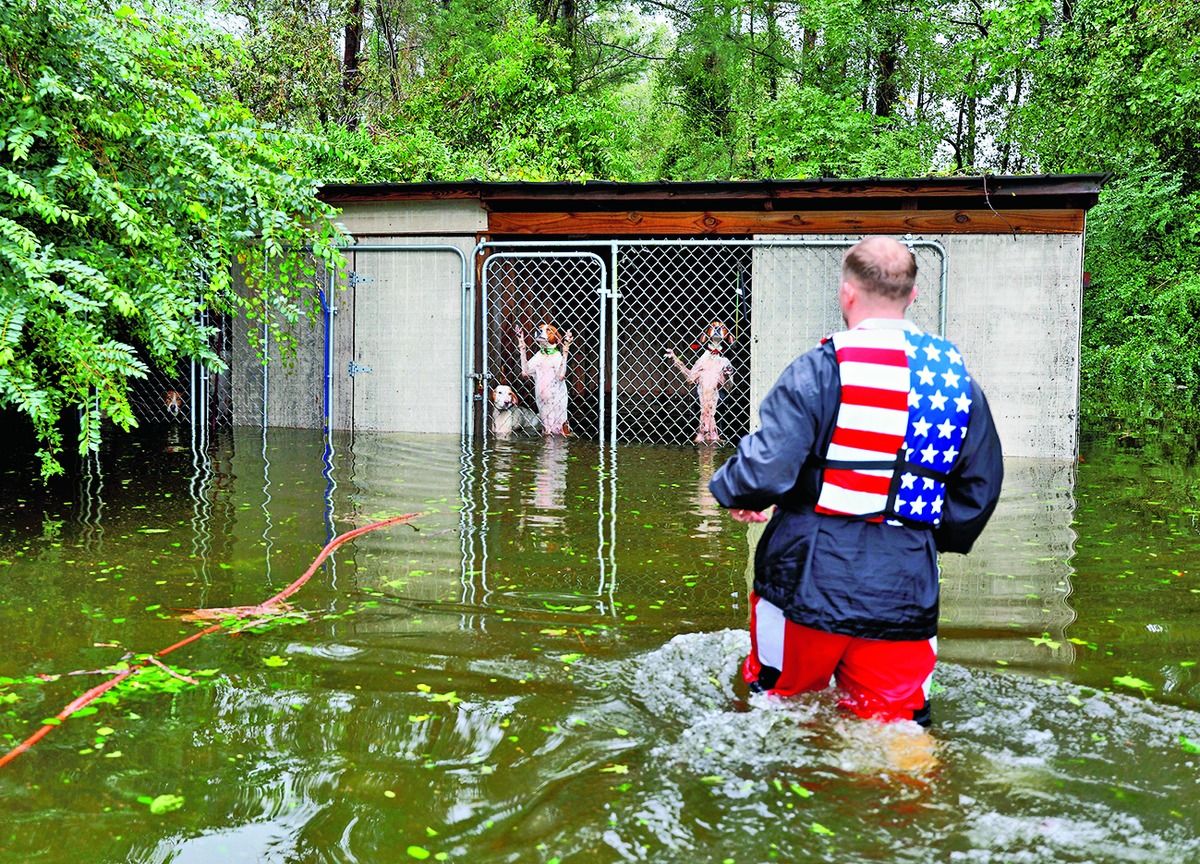 A volunteer approaches dogs that had been left in cages by their owner in Leland, North Carolina. (Below) The dogs flee through the floodwaters after being released as the volunteers check for any more animals left in cages.
Reuters
TT Bureau   |     |   Published 17.09.18, 06:30 PM

Wilmington, Fayetteville, North Carolina: Deeper flooding loomed in the hours and days ahead from rivers in the Carolinas swollen by tropical depression Florence, which has killed 23 people, even if rain-weary residents got a brief glimpse of sunshine on Monday.

The slow-moving storm, a hurricane when it hit the North Carolina coast, has dumped up to 91cm of rain on the state since Thursday, displacing thousands. The flooding could persist for several weeks in some areas. The coastal city of Wilmington remained cut off by flood waters from the Cape Fear River on Monday.

Further inland, the same river, running through Fayetteville, a city of 200,000, was expected to reach major flood levels later on Monday, and would not crest until Tuesday.

Florence was headed through Virginia and towards New England and flash flood watches extended from Maryland to New York and southern New England.

In the Carolinas, the National Weather Service continued to warn people the floods were worsening. "The worst is yet to come," as river levels rise to historic levels, said Zach Taylor, an NWS meteorologist. "The soil is soaked and can't absorb any more rain so that water has to go somewhere, unfortunately."

Major rivers are expected to remain flooded for the next two to three weeks, said Steve Goldstein, National Oceanic and Atmospheric Administration liaison to the US Federal Emergency Management Agency (Fema).

The death toll from Florence, which came ashore in North Carolina on Friday, rose to 23 on Monday.

The dead included a 1-year-old boy who was swept away from his mother as they tried to escape their car amid floodwaters. The woman had driven around barricades to get on a closed road, the sheriff's office in Union County, near North Carolina's border with South Carolina, said on Facebook.

North Carolina officials reported 1,200 road closures, including a stretch of Interstate 95, a major transportation artery running the length of the US East Coast.

About 509,000 homes and businesses were without electricity on Monday in North and South Carolina and surrounding states.

The sun appeared in some areas for the first time in days, allowing some people who had been forced to leave their homes to return home to assess damage.

Eric Tryggeseth, 59, found his home in Leland, North Carolina, without power and with a tree lying in his front yard. He had been evacuated a day before by troops in a truck.

"The floodwaters were rising so I figured I better get out of there,"? he said. "I can't thank the first responders enough."

Sean Adams, 29, a contractor from Leland, said his home suffered only minor damage but he had no idea when power might be restored. With so many roads in and out of the region flooded, he could not access supplies to help start rebuilding. "We really can't get much done right now. It's getting frustrating,"? he said.

By 5am (local time) on Monday, Florence's winds had dropped to about 45kmph, with weakening forecast over the next 24 hours before intensifying again. Reuters