How guest nurses are fighting the virus 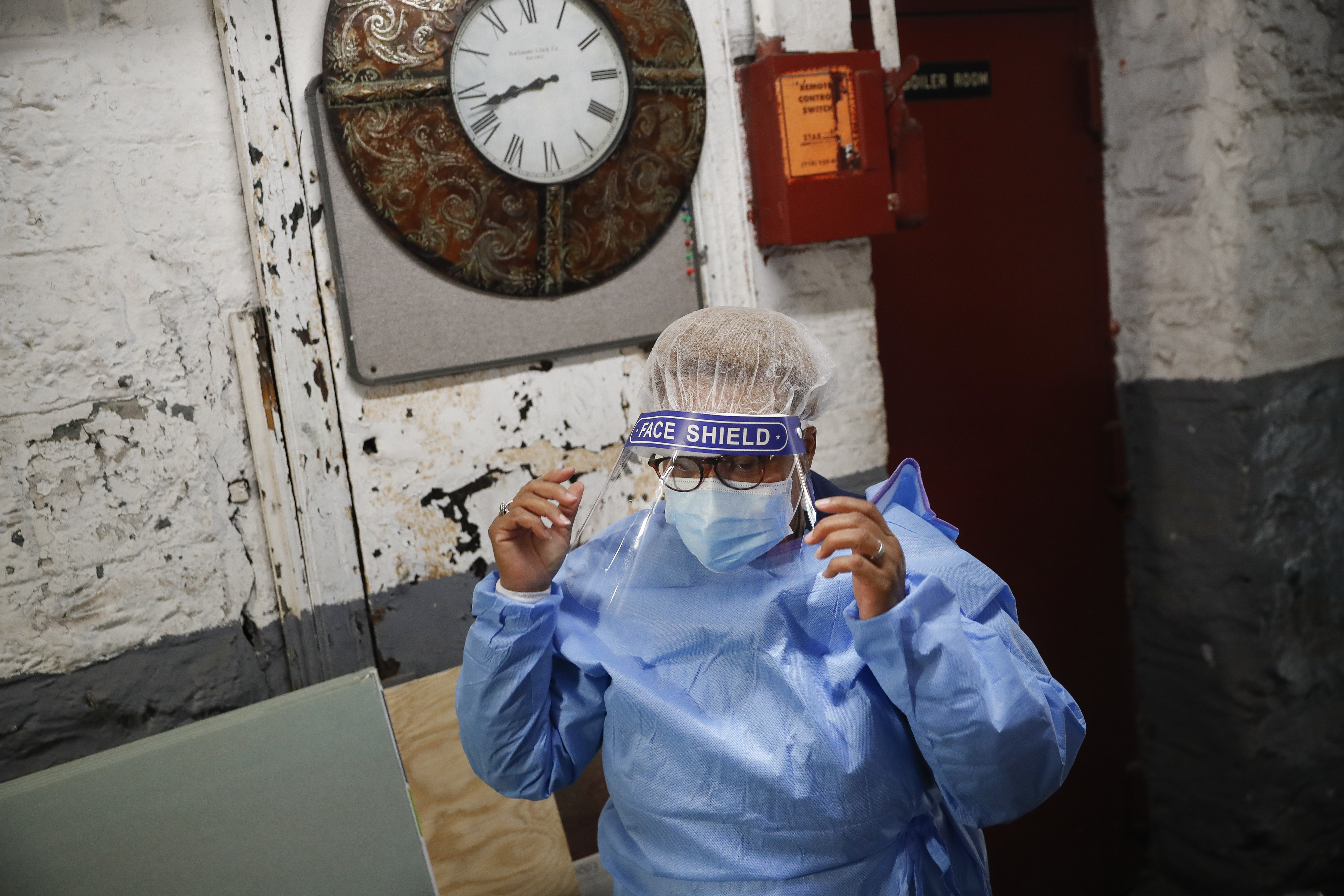 Each night at dusk, in an otherwise desolate Times Square, hundreds of nurses in blue scrubs gather to board buses that take them to hospitals across New York City.

Of the thousands of nurses who have come from other states to shore up New York’s hospitals, more than 4,000 are staying in Midtown Manhattan. During the day, many rest at their hotels, amid darkened Broadway marquees, quiet streets and boarded up shops. At night, they face crowded hospital corridors, panicked patients and strained intensive care units.

“I have never seen patients so sick before,” said Tamara Williams, a 40-year-old nurse from Dallas. “And dying, despite everything that we’re doing.”

Even as the daily death toll has fallen in recent weeks, the coronavirus is still spreading. The number of new hospital admissions in New York, the hardest-hit state, has remained high, about 1,000 a day, down from more than 3,000 a day in early April.

Out-of-state nurses have provided a lifeline for hospitals needing to replace workers as they fall sick or need breaks. Some, seeing New York for the first time, said they were compelled to help hospitals in need. But they also said they were struggling with the grief of witnessing so many deaths and with being hundreds of miles away from their families.

Williams said she couldn’t stay at home after watching television reports about overwhelmed New York City hospitals. “My conscience wouldn’t let me do that,” she said. So against the advice from some members of her family, she packed her bags and said goodbye to her 8-month-old baby and husband.

During her first week at Bellevue Hospital Center in Manhattan, she found herself wondering, again and again, if she had made the right choice. Usually dispassionate, she shook the first time she entered the ICU, having never before seen so many sick patients unresponsive to treatment. She missed her baby. And, as nurses around her developed symptoms, she feared her own exposure to the virus.

During a recent shift, Williams saw nurses huddled in hospital corridors, sobbing, after a colleague they had been treating died from Covid-19. “I see them crying over this person they worked with for so long, and I’m just imagining my own people back home,” she said, breaking into tears.

Heather Smith from Topsail Island, off the coast of North Carolina, who is working at Elmhurst Hospital Center in Queens, said that after seeing so many patients die, she wondered if she made a difference. “Every day you go in and you’re like, ‘Can I do this for one more day? Why did I wake up?’”

Another nurse, Maggie Scott of San Diego, 24, said she was in the wrenching position of having to arrange final FaceTime calls between dying patients and their family members — not just once, but three times in a single shift. Molly Teeter from Magnet Cove, Arkansas, said that bodies sometimes remained in hospital rooms for hours before they could be taken to refrigerated trucks being used as makeshift morgues.

Jim Malatras, president of SUNY Empire State College who is assisting governor Andrew M. Cuomo in New York’s Covid-19 response, said the influx of nurses from outside the state had provided relief for hospitals, allowing them to rotate out exhausted healthcare workers.

Joseph Moscola, senior vice-president at Northwell Health, said the 500 out-of-state nurses — from nearly every state — who had been placed at the 23 hospitals throughout the health care network’s system had been invaluable.

“It’s been this infusion of energy,” he said.

But nurses are exhausted.

Olumide Peter Kolade, 30, who has worked 12-hours shifts for 34 of the past 36 days, said that for the first time in his life, he’d started to meditate, saying “that kind of helps”. He added that sticking to a routine has also helped: work, shower, talk to his family and watch TV — anything but catching up on the news.

Several nurses said that the cheers of support for health care workers at 7pm heard across the city and the hot meals delivered to them by a charity had made them feel welcomed by New Yorkers. But others said there had been a bit of a culture clash between local nurses and those from other parts of the country.

“I come in a little loud and a little country,” said Karma Johnson-Brown, a 49-year-old nurse from Houston. She tries to bring some spirit to the Susan Smith McKinney Nursing and Rehabilitation Center in Brooklyn, where 17 residents have died from Covid-19. “Every day, you have to put your game face on and start all over again,” Johnson-Brown said.

Another nurse, Shameka Dugger from Fort Valley, Georgia, says the other nurses have only just begun to warm up to her and make conversation when she says good morning.

“I guess the Southern hospitality is starting to rub off on them and everything, so the rudeness has calmed down some,” Dugger, 39, said.

A mother of six, Dugger said that when she explained to her children that she would be away for a long time, her 7-year-old said: “‘Mommy, you’re going to be a unicorn super hero!’ I was like yeah, that’s what I’m going to call myself.” Dugger, who had always wanted to visit New York, has managed to visit the Empire State Building, Madison Square Garden and Central Park. Still, she has found the city not as glamorous as she had imagined from the movies.

Each morning, before she arrives at Jacobi Medical Center in the Bronx, she listens to gospel music and prays for the people of New York City. “If you’re not scared to be here, you’re not human,” she said.

But there were also some reasons to be hopeful. On Sunday, three patients were extubated, Dugger said. Every time this happens, the hospital plays Rachel Platten’s pop hit Fight Song over the loudspeaker. “It makes me cry,” she said. “I was like, ‘Oh, Lord.’ It’s an awesome feeling.” She misses home and dreams of hugging and smelling her children, and cooking Southern food for them: fried chicken, collard greens and cornbread.

Not yet, though. “I’m not leaving until this is over,” she said. “I feel like it’s my duty to stay here.”