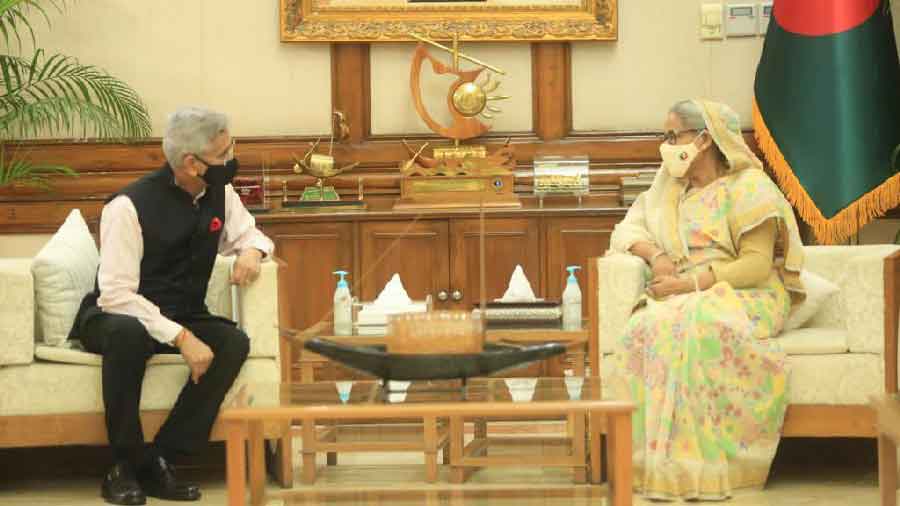 Jaishankar, who arrived here on Thursday on a brief official visit, handed over an invitation to Hasina on her Indian counterpart Narendra Modi's behalf to visit New Delhi.

"Thank Prime Minister Sheikh Hasina for her warm reception. Conveyed personal greetings of PM @narendramodi. Our bilateral relations are moving from strength to strength under the guidance of the two leaders," Jaishankar tweeted.

During the meeting, Prime Minister Hasina said that the two countries have to increase the connectivity further, her press secretary Ihsanul Karim told PTI.

She told Jaishankar that the enhanced connectivity was needed for mutual benefit while it would particularly benefit India's northeastern region in using Bangladesh's southeastern Chittagong port, Karim said.

"If the connectivity is increased, the Indian northeastern states -like Assam and Tripura- can have access to the seaport in Chattogram," she said. The Bangladesh premier noted that initiative were taken to resume cross-border routes between Bangladesh and India which were stopped during the 1965 India-Pakistan war, when Bangladesh was eastern wing of Pakistan.

Karim said a number of bilateral and international issues were discussed during Prime Minister Hasina's more than half an hour long meeting with Jaishankar. Jaishankar later held "positive discussions" with his Bangladeshi counterpart AK Abdul Momen and then jointly briefed the media.

"Agreed that our close neighbourly partnership is progressing steadily. Our shared endeavour would be to take it forward. Looking forward to hosting him for the Joint Consultative Commission," he tweeted.

The Bangladesh foreign ministry said that the two ministers "discussed the bilateral issues between Bangladesh and India. They expressed satisfaction about the ongoing Bangladesh-India cooperation, vowed to further strengthen the bilateral ties, stressed on regional stability for socio-economic development as a whole."

Jaishankar said that during the talks with Prime Minister Hasina he extended Prime Minister Modi's invitation to her to visit India at the time of her convenience.

"I conveyed (her) that we look forward to her visit to India at a time her convenience, he said, adding that a number of issues relating to bilateral ties as well as regional and global issues figured during the talks.

During the meeting, they expressed delight at the current state of the existing bilateral relations between the countries, Karim told reporters.

Defence sector cooperation, water sharing of Kushiara and Feni rivers, current Covid -19 situation and impacts of Russia-Ukraine war on the global economy came up prominently in the discussion, Karim was quoted as saying by local media.

Jaishankar, who arrived here on a brief official visit, was received at the Bangladesh Air Force Base Bangabandhu by Foreign Minister Momen.

His visit to Bangladesh is aimed at preparing the grounds for Prime Minister Hasina's visit to India.

The two countries are expected to fix the date of the 7th Bangladesh-India Joint Consultative Commission (JCC) meeting, which is scheduled to take place in New Delhi. Momen also hosted an Iftar party followed by a dinner in Jaishankar's honour at the Foreign Service Academy.

Jaishankar would leave Dhaka for Bhutan on Friday morning. His last visit to Bangladesh was in March last year.

In New Delhi, the Ministry of External Affairs (MEA) said in a statement that the visit of the external affairs minister to Bangladesh may be seen in the context of frequent bilateral high-level visits and exchanges particularly as both sides commemorate 50 years of the establishment of diplomatic ties. Hasina last visited New Delhi in 2019 to attend the Indian Economic Summit of the World Economic Forum (WEF) when she also had bilateral talks with her Indian counterpart.

Modi, on the other hand, visited Bangladesh on March 26-27 last year at Hasina's invitation to join golden jubilee celebration of the country's independence, birth centenary of Bangladesh's Father of the Nation Bangabandhu Sheikh Mujibur Rahman and the 50th years of establishment of Bangladesh-India diplomatic relations.

President Ram Nath Kovind also paid a state visit to Dhaka from December 15-17 last year at the invitation of his Bangladesh counterpart Abdul Hamid to attend the 50th victory day celebration of Bangladesh.