Advertisement
Home / World / After 200 years, Sweden back in the fight

After 200 years, Sweden back in the fight 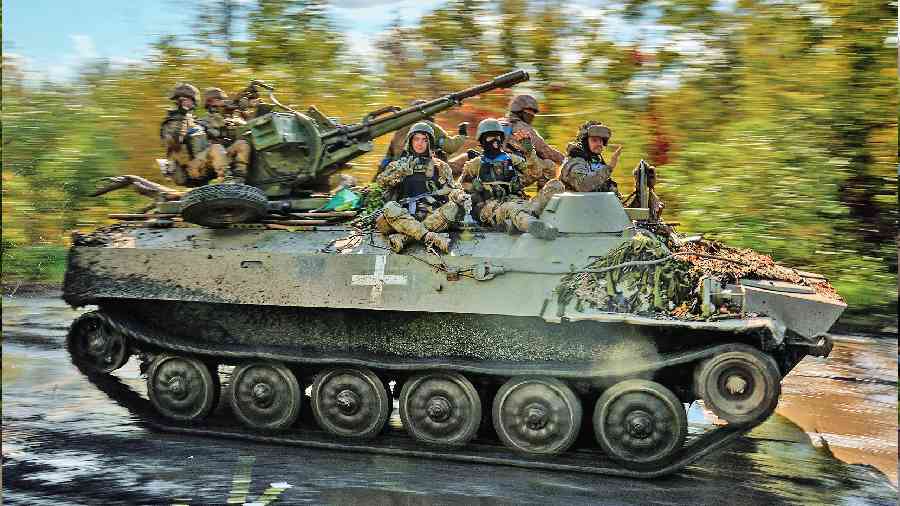 The last time this famously neutral country went to war, Napoleon was on the back foot in France and Britain was preparing to burn Washington.

But Russia’s invasion of Ukraine has upended 200 years of global pacifism for the children of the Vikings.

And so it was that as President Vladimir V. Putin of Russia issued veiled threats late last month about unleashing nuclear war, the US was holding military exercises with Sweden, one of Nato’s most recent applicants.

While the war raged in Ukraine, hundreds of Marines joined their Swedish counterparts for manoeuvres in the Baltic Sea, on and around some of Sweden’s 100,000 mostly uninhabited islands. In the cold rain and under heavy fire, they scrambled up slippery rocks, landed combat boats on shores and crawled on their bellies through forested ravines.

On the island of Uto, which Russia invaded in 1719, American and Swedish marines spent two weeks launching round after round of artillery as part of their training to make sure the past does not repeat itself. (The Russians burned the place to cinders, leaving only a church steeple in one village.)

For the Americans, this is somewhat new territory. After 20 years of war in Iraq and Afghanistan, the manoeuvres required for combat in the Baltic Sea represent a crash course in amphibious warfare, including diving into frigid waters while clad in heavy gear and carrying machine guns. It means learning how to remain underwater for long periods of time before emerging in a burst of attacking machine gunfire.

“It is definitely a different type of environment than Afghanistan or Iraq, where we are very vehicular-mobile,” said Brig. Gen. Andrew T. Priddy, the commander of the Second Marine Expeditionary Brigade.

From a wet and windy hilltop on the island of Lilla Skogsskar, General Priddy kept watch as US and Swedish marines stormed the beaches of nearby Stora Skogsskar.

“Being able to operate in this kind of environment in the archipelago is extremely important, and we as a Marine Corps have a lot to learn from them,” he said of the Swedes.

This is somewhat new territory for Sweden as well. The terrain may be familiar, but war is not — not for this generation, or their parents’ generation, or their grandparents’ or great-grandparents’ generations. The country’s last war was in 1814, when it pried Norway loose from the Danes. For 200 years, Sweden maintained a non-aligned foreign policy during times of peace and proclaimed itself neutral during times of war.

Sweden avoided World War II, sparing itself the German occupation that Norway endured and the Soviet invasion that Finns suffered. During the Cold War, Sweden continued on its neutral path. The country sent troops to United Nations peacekeeping operations around the world, and even to Afghanistan after the 9/11 attacks in the US, but declined to join Nato.

And then February 24, 2022, happened. The Russian invasion of Ukraine brought into sharp relief the limitations of being in Europe but not having the security guarantees of Nato’s collective defence pact.

The Finns — dragging the Swedes with them — applied for membership of the alliance.

“Military non-alignment has served Sweden well, but our conclusion is that it won’t serve us equally well in the future,” Prime Minister Magdalena Andersson of Sweden said at the time. “This is not a decision to be taken lightly.”

Within weeks of the announcements that the two countries wanted to join Nato, alliance military planners were scheduling shows of force with them, including a host of exercises.

As the Marines, most of them from the Second Marine Expeditionary Force, were in the Swedish archipelago, another group of Marines was practising island seizures with the Finnish navy.

“We are sending a message to mostly Russia, that we have partners, we are training, we are building up our capacity and the capability,” said Col. Adam Camel, commander of the Swedish navy’s First Marine Regiment. “We are united, I would say, and very eager to defend Sweden, as well as this region.”

The focus on taking and defending islands is crucial, military officials say, because the Baltic Sea will soon be encircled, save for Kaliningrad and St Petersburg, by Nato countries: Estonia, Latvia, Lithuania, Poland, Germany, Denmark — plus Finland and Sweden. If the allies approve their memberships, both countries would be expected to contribute to any chokeholds that Nato might put in place in the sea in the event of a war with Russia, officials at the Pentagon say.

The Swedish archipelago would be part of any such endeavour.

During the exercises, American Marines experimented with a slew of new ways to conduct warfare, gained from past conflicts in different climes.

In one case, a very different clime.

Perched atop Lilla Skogsskar, Sgt David Swinton, a radio operator with the Second Marine Division, checked the controls of a radar that he and his platoon mates referred to as “the system”.

“The system”, essentially a Simrad Halo 24 radar that can be put on any fishing boat, is readily available on the commercial market — you can get one at Bass Pro Shops for about $3,000. But for the past year, Sergeant Swinton and his fellow radio operators have been working on adapting the radar for use in war manoeuvres around the world.

“We figured out how to take this and tie it into the SIPR network,” Sergeant Swinton explained, in a reference to the computer networks used by the Pentagon to transmit classified information.

“So we can tie it in there, and anyone in the world can get on and they can see what we’re sending out with this radar.”

It takes five minutes to set up. A marine stationed on any of the islands would be able to use the radar to send back data on Russian ships.

“We’re bringing stuff like this to Sweden to show them that you can put four-man teams on an island 60 miles from another one, and we can scan the entire island for you and feed that information back to your naval fleets,” Sergeant Swinton said. “You can have complete awareness of what’s going on on your coastline.”

The idea came, incongruously, from the Houthis in Yemen, the scrappy, Iranian-backed rebels who have bedevilled an American-backed coalition of Gulf States for years and rule a swathe of territory in northern Yemen. The Houthis, who wield a vast arsenal of cruise and ballistic missiles, kamikaze boats and long-range drones, have used the radars to track Emirati and Saudi ships.

Then the commanding general of the Second Marine Division, Maj. Gen. Francis L. Donovan saw what the Houthis were doing back when he was leading a Fifth Fleet amphibious task force operating in the southern Red Sea.

“We were trying to figure out how they were targeting coalition shipping,” General Donovan said in an interview. Soon he realised that the Houthis were using off-the-shelf radars, mounting them on vehicles on the shore and moving them around.

One year later, Sergeant Swinton and Staff Sgt Joseph Owen, a platoon commander with a tour in Afghanistan under his belt, were checking to see if the Houthi-inspired radar system would work against Russian ships in the Baltics.

For Sweden, any system that can detect goings-on in the archipelago is worth incorporating into its arsenal, said Rear Adm. Ewa Skoog Haslum, the Swedish navy chief. The shallow waters that surround the islands make it easy for Russian submarines to hide, she said.

“It’s very hard to have the anti-submarine warfare hunting in the archipelago,” Admiral Haslum said in an interview in Stockholm. “You need specific capabilities.”

No one is saying the Simrad boat radar can detect Russian submarines in the archipelago. But that, General Donovan said, is the beauty of working in an alliance.

“There’s not one thing that does all, but we will provide one medium, and someone else will take care of other mediums,” he said.

Russia does not have any partners right now, he noted. “Our strength is our allies and partners, and how we bring that all together.”