Advocacy for rights of nature and animal rights is becoming more prominent in environmental diplomacy. 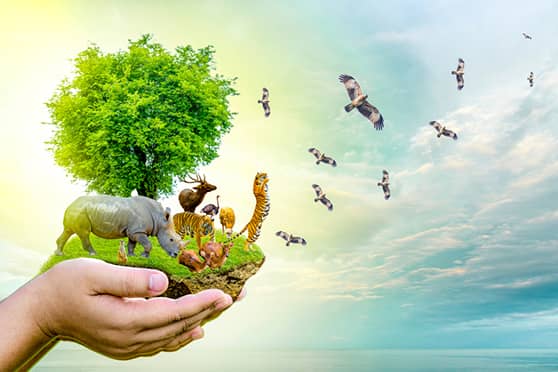 In 1972, acid rain was destroying trees. Birds were dying from DDT poisoning, and countries were contending with oil spills, contamination from nuclear weapons testing and the environmental harm of the Vietnam War. Air pollution was crossing borders and harming neighbouring countries.

At Sweden's urging, the United Nations brought together representatives from countries around the world to find solutions. That summit the UN Conference on the Human Environment, held in Stockholm 50 years ago on June 5-16, 1972 marked the first global effort to treat the environment as a worldwide policy issue and define the core principles for its management.

The Stockholm Conference was a turning point in how countries thought about the natural world and the resources that all nations share, like the air.

It led to the creation of the UN Environment Programme to monitor the state of the environment and coordinate responses to the major environmental problems. It also raised questions that continue to challenge international negotiations to this day, such as who is responsible for cleaning up environmental damage, and how much poorer countries can be expected to do.

On the 50th anniversary of the Stockholm Conference, let's look at where half a century of environmental diplomacy has led and the issues emerging for the coming decades.

From a diplomacy perspective, the Stockholm Conference was a major accomplishment.

It pushed the boundaries for a UN system that relied on the concept of state sovereignty and emphasized the importance of joint action for the common good. The conference gathered representatives from 113 countries, as well as from UN agencies, and created a tradition of including nonstate actors, such as environmental advocacy groups. It produced a declaration that included principles to guide global environmental management going forward.

The declaration explicitly acknowledged states' sovereign right to exploit their own resources pursuant to their own environmental policies, and the responsibility to ensure that activities within their jurisdiction or control do not cause damage to the environment of other States or of areas beyond the limits of national jurisdiction. An action plan strengthened the U.N.'s role in protecting the environment and established UNEP as the global authority for the environment.

The Stockholm Conference also put global inequality in the spotlight. Indian Prime Minister Indira Gandhi questioned the urgency of prioritizing environmental protection when so many people lived in poverty. Other developing countries shared India's concerns: Would this new environmental movement prevent impoverished people from using the environment and reinforce their deprivation? And would rich countries that contributed to the environmental damage provide funding and technical assistance?

Twenty years later, the 1992 UN Conference on Environment and Development the Earth Summit in Rio de Janeiro provided an answer. It embraced sustainable development development that meets the needs of the present without compromising the ability of future generations to meet their own needs. That paved the way for political consensus in several ways.

First, climate change was making it clear that human activities can permanently alter the planet, so the stakes were high for everyone. The imperative was to establish a new global partnership mobilising states, key sectors of societies and people to protect and restore the health of the Earth's ecosystems.

Finally, while all countries were expected to pursue sustainable development, it was acknowledged that developed countries had more capacity to do so and that their societies placed greater pressures on the environment.

The Earth Summit produced the UN Framework Convention on Climate Change, laying the foundation for global climate negotiations that continue today; the Convention on Biological Diversity; nonbinding Forest Principles; and an overarching action plan to transition to sustainability.

Progress, but major challenges ahead

The world has pulled together to stop the destruction of the ozone layer, phase out leaded gasoline and curb the pollutants from burning fossil fuels that create acid rain. In 2015, UN member countries adopted 17 Sustainable Development Goals with measurable targets and signed the Paris climate agreement. Countries in 2022 committed to develop a treaty to reduce pollution from plastics. Climate change and sustainable resource use have also become higher priorities in foreign policymaking, international organisations and corporate boardrooms.

But while environmental diplomacy has demonstrated that progress is possible, the challenges the world still faces are immense.

Greenhouse gas concentrations are still increasing, and rising temperatures are fuelling devastating wildfires, heat waves and other disasters. More than a million plant and animal species are threatened with extinction, potentially leading toward the worst loss of life on the planet since the time of dinosaurs. And 99% of the global population breathes air that exceeds World Health Organization guidelines for pollutants.

The next 50 years: Trends to watch

As environmental diplomacy heads into its next 50 years, climate change, biodiversity and effects on human health are high on the agenda. Here are a few newer trends that also bear watching.

The idea of a circular economy is gaining interest. People produce, consume and throw away billions of tons of materials every year, while recycling or reusing only a small percentage. Ongoing efforts to create a more circular economy, which eliminates waste and keeps materials in use, can help mitigate climate change and restore natural systems.

Advocacy for rights of nature and animal rights is becoming more prominent in environmental diplomacy.

Outer space is another theme, as it increasingly becomes a domain of human exploration and settlement ambitions with the growth of private space travel. Space junk is accumulating and threatening Earth's orbital space, and Mars exploration raises new questions about protecting space ecosystems.

The 50th anniversary of the Stockholm Conference is an important opportunity to think about development rights and responsibilities for the future while using environmental diplomacy today to preserve and regenerate the Earth.