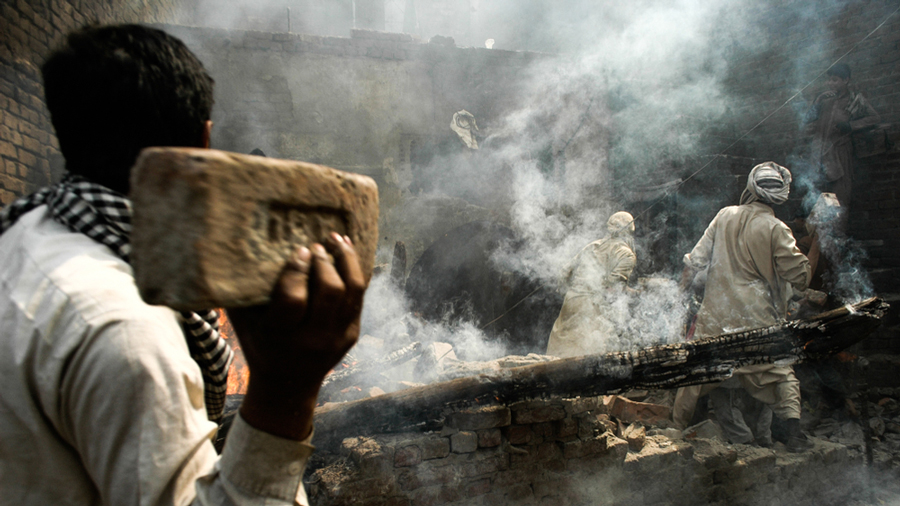 Pakistani police have arrested over 30 people, most of them belonging to a radical Islamist party, after a Hindu temple was vandalised and set on fire by a mob protesting its renovation in northwest Pakistan.

A central leader of the radical Jamiat Ulema-e-Islam party, Rehmat Salam Khattak, was among those arrested in police raids after the attack on Terri temple and samadhi of Shri Paramhans Ji Maharaj in the Karak area of Khyber-Pakhtunkhwa province on Wednesday, the police said.

The mob, led by some local clerics and the supporters of the Jamiat Ulema-e-Islam party (Fazal ur Rehman group), was protesting the expansion work being carried out at the shrine. They demolished the newly constructed building that was alongside the old structure.

Over 350 people have been named in the FIR, provincial police chief K.P.K. Sanaullah Abbasi said.

The samadhi of Shri Paramhans Ji Maharaj is considered very sacred by the minority Hindus in Pakistan. It is dedicated to the Maharaj and was built where he died in 1919 in Teri village.

The controversy over the samadhi has been festering for decades.

According to the details submitted to the Supreme Court in 2014, the Hindus had been visiting the shrine till 1997 when it was dismantled by the locals.

The Supreme Court in 2014 ordered the Khyber Pakhtunkhwa government to restore and reconstruct the Hindu shrine.

The order was issued in response to a  petition by a Hindu lawmaker who had claimed that the shrine had been occupied by an influential cleric of the area.

According to police officials, a meeting of clerics was held at Shanki Adda in Teri, Karak, before the attack.

The enraged mob shouted slogans and vowed that they would not permit any construction work at the shrine.

They were peaceful initially, but after being provoked by some clerics, they turned violent and attacked the temple, the police said.

Meanwhile, the Supreme Court on Thursday took notice of the attack on the temple and ordered the local authorities to appear before the court on January 5.

According to a statement by the top court, Hindu lawmaker and chief of Pakistan Hindu Council, Ramesh Kumar Vankwani, called on Chief Justice Gulzar Ahmed in Karachi to discuss the issue.

“The chief justice of Pakistan showed grave concern over the tragic incident and informed the member of parliament that he has already taken cognisance of the issue and has fixed the matter before court on January 5 at Islamabad,” according to the statement.

The court has issued directions to a one-man Commission on Minorities Rights, KP chief secretary and KP inspector general of police to visit the site and submit a report on January 4.

The incident drew condemnation from some Pakistani leaders, human rights activists and the minority Hindu community.

Religious affairs minister Noorul Haq Qadri termed the destruction of the temple against the teaching of Islam. He said that the constitution of the country ensures protection of religious places of minorities.

Pakistan’s federal parliamentary secretary for human rights Lal Chand Malhi strongly condemned the attack. Noting that some groups are active in carrying out such anti-social activities, Malhi said the government will not tolerate such incidents. KP chief minister Mahmood Khan said the attack was “an unfortunate incident.”