Plea to modify the earlier design of the wall by scaling down the height to 2.5ft from the earlier 4ft 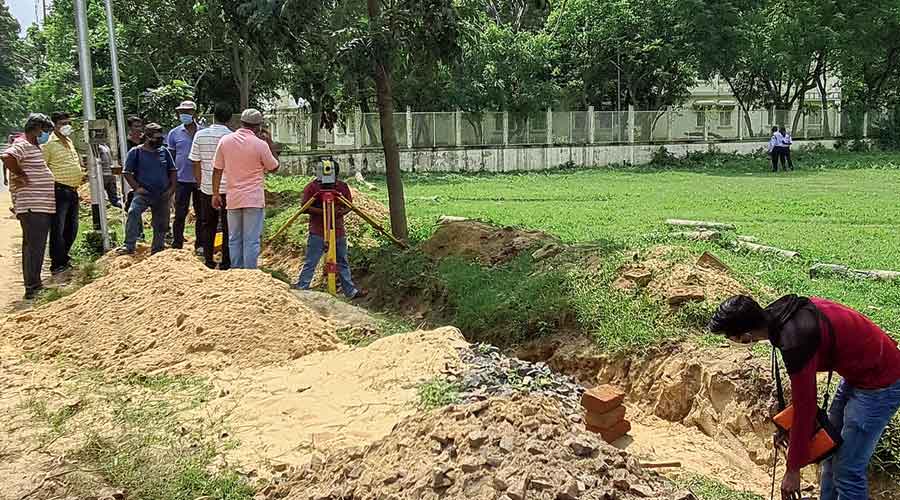 Visva-Bharati on Monday resumed work to fence the Pous Mela ground following a decision taken at a meeting on Sunday that was attended by members of a committee formed by Calcutta High Court and officials of the varsity and district administration.

Sources said the four-member committee headed by Justice Sanjib Banerjee had verbally asked the Visva-Bharati to modify its earlier design of the wall by scaling down the height to 2.5ft from the earlier 4ft. The boundary will now rise to a height of 6ft with iron grill covering the area beyond the 2.5ft-high concrete structure.

The work to fence the Pous Mela ground was stopped after it ran into violent opposition on August 17 with a 5,000-strong mob vandalising a gate of the varsity and a makeshift pandal.

A Calcutta High Court division bench headed by Chief Justice T.B.N. Radhakrishnan had set up the four-member committee on September 18 to look into aspects of the ongoing impasse at Visva-Bharati over the construction of a wall on the Pous Mela ground and to find a solution by involving all stakeholders.

The committee was formed following a public interest litigation filed by advocate Ramaprasad Sarkar in the high court seeking a CBI probe into the incident of vandalism. The bench felt that there was no necessity to take the assistance of the petitioner in the matter and issued the suo motu order.

“The HC appointed committee on Sunday asked Visva-Bharati to build a 2.5ft concrete base and then fix a 3.5ft iron grill on it. The entire fencing would be 6ft high. As per the direction of the committee, work resumed on Monday. However, the actual height of the boundary will be known once the varsity issues a written order,” said a senior varsity official.

However, the officiating public relations officer of Visva-Bharati Anirban Sircar did not respond to the text message The Telegraph had sent him on the issue.

The committee members have held three meetings since September 20 and the decision was taken after they spoke with local residents, Ashramiks (old timers) and traders on Saturday.

Old timers of Santiniketan have welcomed the modified boundary wall plan suggested by the committee. “We have no objection with the modified height of the fencing. We were against building a high boundary wall,” said Supriya Tagore, a descendant of Rabindranath Tagore family.

Supriya Tagore, along with other Santiniketan residents, had raised their voices against a wall that has been built in front of the house of Rabindra Sangeet maestro Santideb Ghosh.

“The committee members assured us that they would also look into the boundary walls that we had objected to,” he said.

On Monday, around 40 workers started work to build the concrete base of the boundary wall. At least 50 varsity security persons and a group of police personnel had been deployed at the site to avoid any untoward incident.

Local traders and a section of residents of Bolpur have formed the Melar Math Banchao Committee to oppose building fences on Pous Mela ground. They have decided to move court and from Tuesday they launch a campaign against building of the wall.

“We will fight the committee’s direction legally and on the streets under the banner of the Melar Math Banchao committee,” said Subrata Bhakat, treasurer of Bolpur Traders’ Association.

Apprehending trouble, the Visva-Bharati on Monday evening wrote to the district magistrate, superintendent of police and sub-divisional officer seeking imposition of Section 144 of the CrPc in the mela ground area.

Basu, however, said she was yet to receive any such letter.